The countdown to Megxit: Prince Harry and Meghan Markle last six engagements – including joining the Queen on Commonwealth Day – before their time as working royals ends on March 31

The countdown to Megxit is now on with the Duke and Duchess of Sussex due to step down as working royals in less than six weeks.

Prince Harry and Meghan Markle will take part in just six more engagements before they officially step down on March 31 and close their Buckingham Palace office.

However, their final official engagement is expected to be as soon as March 9, when they will join the Queen at Westminster Abbey to mark Commonwealth Day.

Both Harry, 35, and Meghan, 38, will return to the UK over the next two weeks to undertake their final engagements as working royals.

These will be carried out as part of the royal rota system under the scrutiny of national media – print, radio and television – before they withdraw from it.

The Sussexes are living in a mansion on Vancouver Island in Canada with baby Archie – but sources say they see their future in the US.

Other events they will attend will include the Endeavour Fund Awards on March 5 and the Mountbatten Music Festival at the Royal Albert Hall two days later.

The couple have been told to drop their ‘Sussex Royal’ label, despite setting up a flashy new website to complement their popular Instagram feed under the title.

The Queen and senior officials are believed to have agreed it is no longer tenable for the couple to keep the word ‘royal’ in their ‘branding’.

Harry will retain his military ranks of major, lieutenant commander and squadron leader but will not use his honorary military positions.

The roles will remain unfilled during an agreed 12-month trial period, leaving the door open for him to return. Harry will also remain sixth in line to the throne.

Both Harry and Meghan will return to the UK over the next two weeks to undertake their final engagements as working royals.

Here is a guide to what their final six engagements will be before they step down:

The first event for either Prince Harry or Meghan Markle in the couple’s farewell set will see Harry attend a recording session with US rock star Jon Bon Jovi and the Invictus Games choir, who are rerecording his song Unbroken to promote this year’s tournament.

The song will be recorded in Studio 2 at Abbey Road Studios in London, which was made famous by The Beatles who recorded 11 out of their 13 albums there.

The competition is designed to highlight the importance of sport as part of the recovery journey of those with life changing injuries or illnesses. 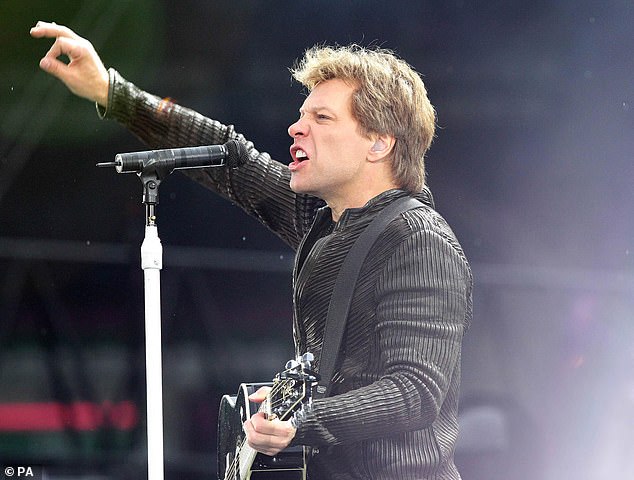 Prince Harry will attend a recording session with Jon Bon Jovi, pictured in Edinburgh in 2011

Harry staged the first games in 2014, and in September 2019 celebrated its fifth anniversary, saying had changed society’s perception of disability and mental health.

Harry was inspired to found the global tournament after attending the Warrior Games in Colorado in 2013 and seeing how injured American military personnel thrived on the challenge of taking part in competitive sports aiding their recovery.

He went on to stage the inaugural games in London’s Olympic Park in 2014, followed by Orlando in 2016, Toronto in 2017 and Sydney in 2018, with The Hague chosen for the 2020 event where 500 competitors will take part in ten adaptive sports.

Organisers have said that after 2020, Invictus will be staged every two years.

Six days later the couple will attend the Endeavour Fund Awards which recognises wounded, injured or sick military personnel and veterans who have gone on to use sport and adventurous challenges as part of their recovery and rehabilitation.

Harry has attended every ceremony since the inaugural one in 2017, which he went to with his brother William. He went to the event in 2018 and 2019 with Meghan. 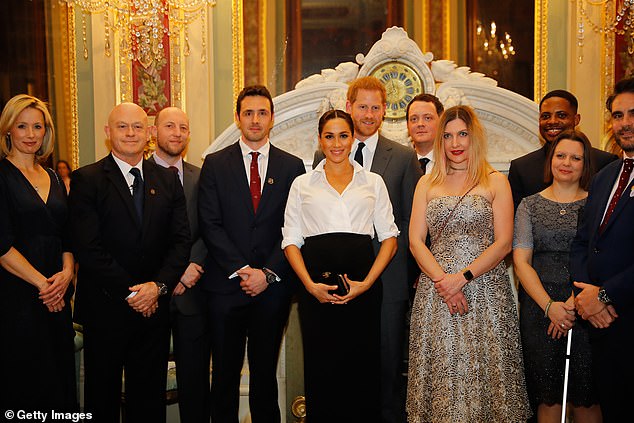 The Duke and Duchess of Sussex pose with nominees and guests at the Endeavour Fund Awards at Drapers’ Hall in London on February 7, 2019

The Endeavour Fund was led by his and the Duke and Duchess of Cambridge’s Royal Foundation which saw them step up the drive to help wounded service personnel.

The Fund has brought about programmes such as Climb2Recovery, led by former Royal Engineer Neil Heritage Team Endeavour Racing, which was started by former Infantryman Stu Croxford and carried on by Royal Engineer veteran Brian Seggie. 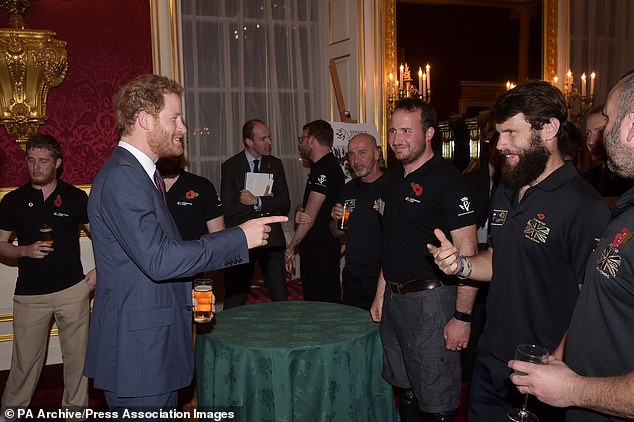 It has also resulted in an expedition to Oman organised by a veteran Rifleman, Matt Fisher, which saw him and the team spend several days crossing the desert with Fund ambassador Levison Wood.

Harry has said of the Fund: ‘I am continually amazed by the tenacity, fortitude and unshakable humour displayed by the men and women who sign up to run races, cross oceans, climb mountains or take on challenges few would even contemplate.’

The following day, Harry will join British Formula 1 driver Lewis Hamilton at the official opening of the Silverstone Experience.

The much-anticipated museum – which the Duke has been backing for years – will tell the story of the past, present and future of British motor racing. 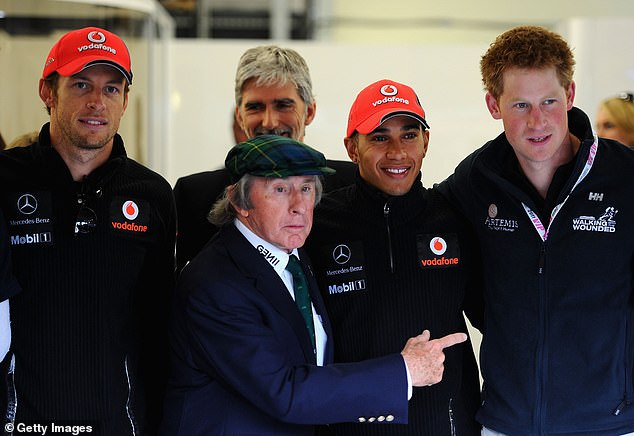 Harry official launched the project for the £19.3million visitor attraction in March 2018 and is the patron of the museum in Northamptonshire.

It was built inside a former Wellington bomber hanger located within the grounds of the track and officials hope it more than 500,000 people a year will visit. 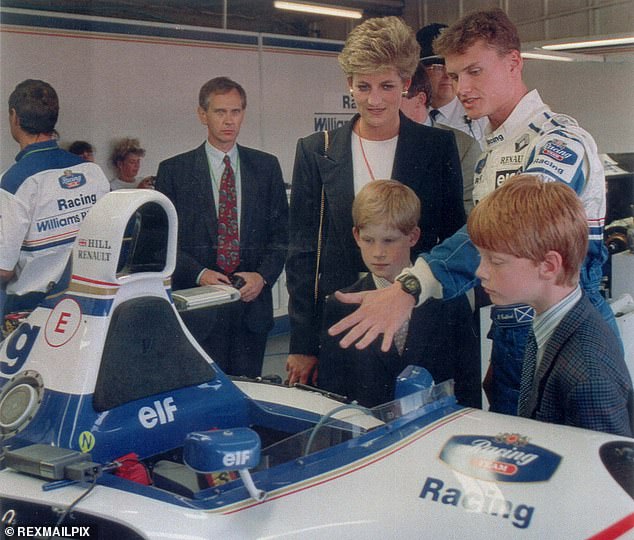 Prince Harry, his cousin George McCorquodale and his mother Princess Diana are shown the workings of a Williams F1 car at Silverstone by driver David Coulthard in July 1994

Harry had promised it would be ‘an exhilarating attraction, based here at the home of British motorsport and I’m sure it will help to engage children in engineering’.

Harry is a big F1 fan, and congratulated Hamilton on his title win in November 2014 by telling him on the radio: ‘Lewis, you’re an absolute legend. Well done mate.’

The couple will also attend the Mountbatten Music Festival at the Royal Albert Hall, which see the Royal Marines showcase their musicianship and pageantry.

The festival takes places over two days – March 6 and March 7 – at the venue in London, with Harry expected to attend the Saturday evening performance. 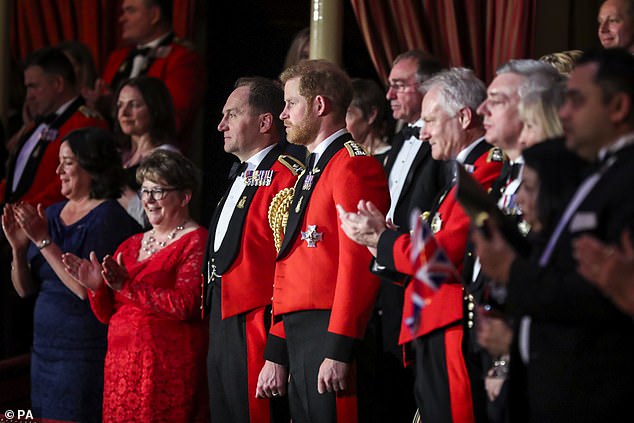 Last year’s concert saw the Marine bands performed a range of different songs, including versions of popular hits by Take That and the Greatest Showman.

The 2019 event also marked the 75th anniversary of D-Day. All proceeds from the concert this year will again go to The Royal Marines Charity and CLIC Sargent. 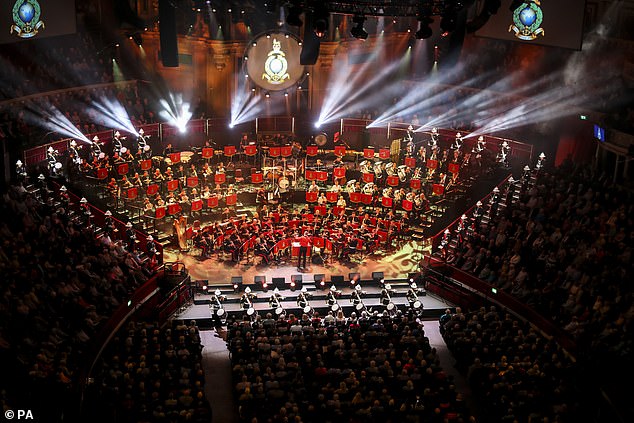 This event will also be Harry’s last engagement as Captain-General of the Royal Marines, before he loses this title as he steps down as a senior royal.

The couple will continue to be known as the Duke and Duchess of Sussex, as well as by the Earl and Countess of Dumbarton and the Baron and Baroness of Kilkeel.

Meghan is expected to undertake an engagement to mark International Women’s Day on March 8, although no specifics have yet been revealed.

Speaking on a panel to mark International Women’s Day last year, she said she would like her first child to be a feminist, regardless of whether they are a girl or a boy. 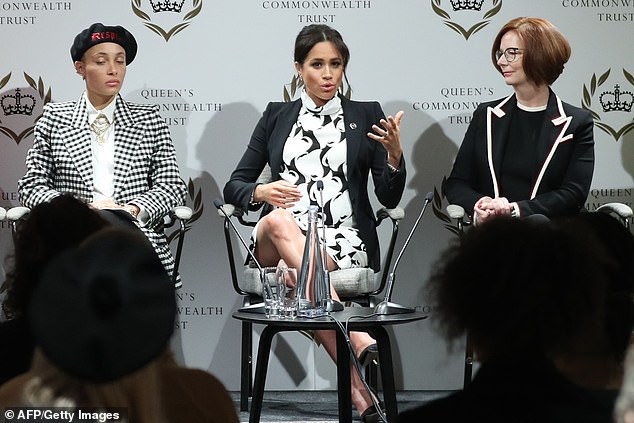 Speaking on a panel to mark International Women’s Day, Meghan said she had recently been watching a documentary on feminism.

She told an audience at King’s College London last March: ‘One of the things they said during pregnancy was ‘I feel the embryonic kicking of feminism’.’ 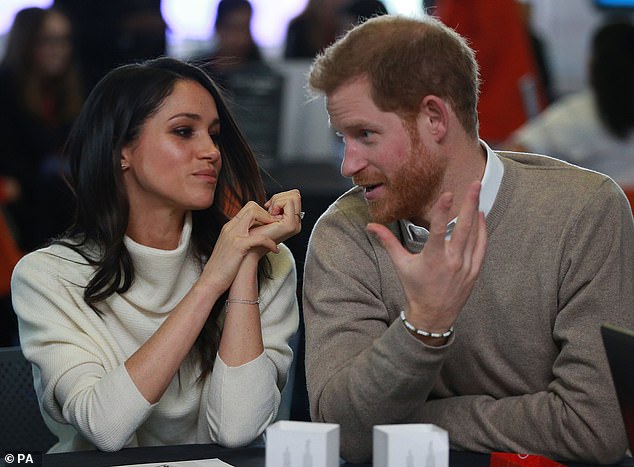 In March 2018, Harry and Meghan took part in an International Women’s Day event in Birmingham to encourage young women to pursue careers in Stem subjects

Meghan has spoken about how noticed during a school assignment that an advert for a dishwashing detergent suggested women do all the cleaning.

She complained about it in a letter to Proctor and Gamble when she was aged just 11, and the firm responded by changing a line in the advert.

In 2018, Harry and Meghan took part in an International Women’s Day event in Birmingham to encourage young women to pursue careers in science, technology, engineering and maths (Stem) subjects.

Harry and Meghan will both attend the Commonwealth Day service at Westminster Abbey the next day with the Queen and other senior members of the Royal Family.

Earlier this month it was revealed that the Queen had requested that Harry and Meghan attend the annual service with the rest of the royals. 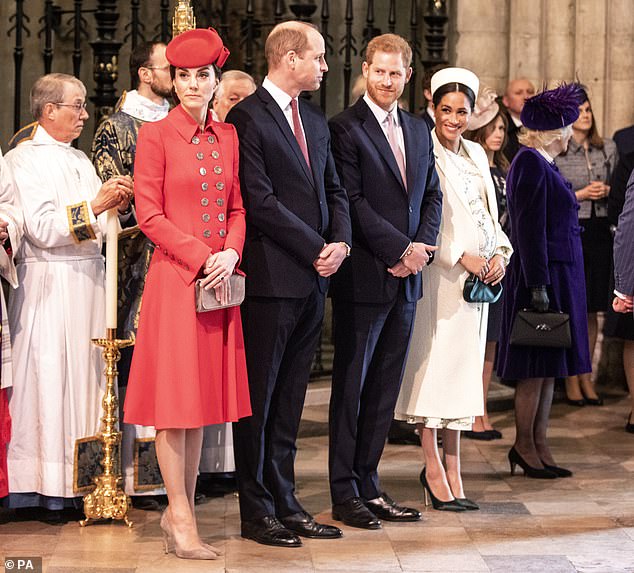 The event will likely see the Duke and Duchess of Sussex reunite with Prince William and Kate, a year after they were pictured smiling together at the 2019 service.

But the Sussexes have severed professional ties with the Cambridges by pulling out of the Kensington Palace household and their joint charitable foundation. 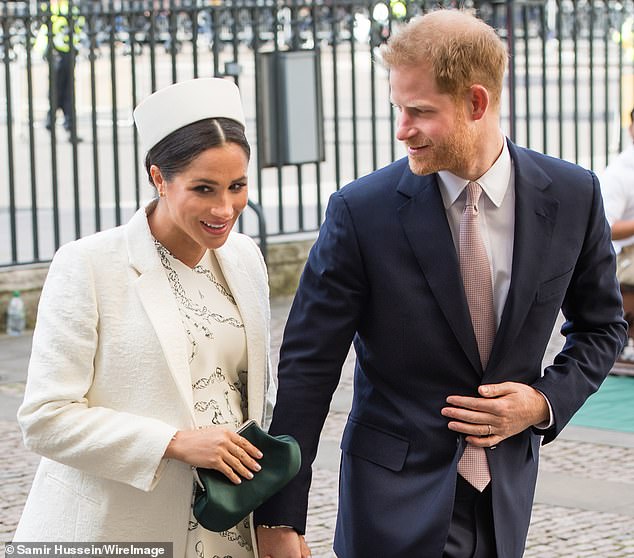 At last year’s event, Harry and Meghan were seated beside Prince Andrew, who has left his royal duties after an interview about his paedophile friend Jeffrey Epstein.

The 2019 service included performances by the Dhol Foundation drummers, Clean Bandit, William Barton on the didgeridoo, tenor Alfie Boe and the B Positive choir.

Commonwealth Day has been celebrated since 1977 annually on the second Monday in March, celebrating the historic ties Britain has with the 53 other countries.