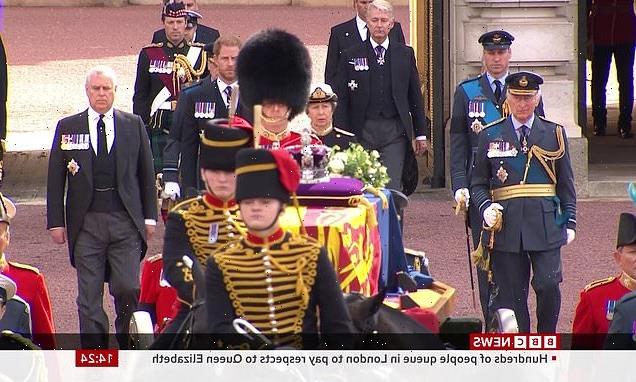 A stern-faced Prince Andrew wore medals pinned to a morning suit as he followed coffin of his mother the Queen during historic procession from Buckingham Palace to Westminster Hall this afternoon.

The disgraced Duke of York – along with Prince Harry – was told he couldn’t wear his military uniform for the service, unlike other members of the family, including King Charles III and William, the Prince of Wales.

As the coffin left the Palace at exactly 2.22pm, silence fell among the thousands-strong crowd, while a muffled drum draped in black was beaten at 75 paces per minute.

The coffin was draped in the Royal Standard, with the Imperial State Crown on a velvet cushion with a wreath of flowers atop, and carried on a gun carriage of King’s Troop Royal Horse Artillery.

The Band of the Scots Guards and the Band of the Grenadier Guards are playing funeral marches throughout the procession, starting with Beethoven’s Funeral March No.1.

The pace and route have been carefully mapped out to allow the procession to reach Westminster Hall at precisely 3pm.

The sun shone as the procession moved onto The Mall in central London and members of the crowd threw yellow roses into the road as the gun carriage passed them. 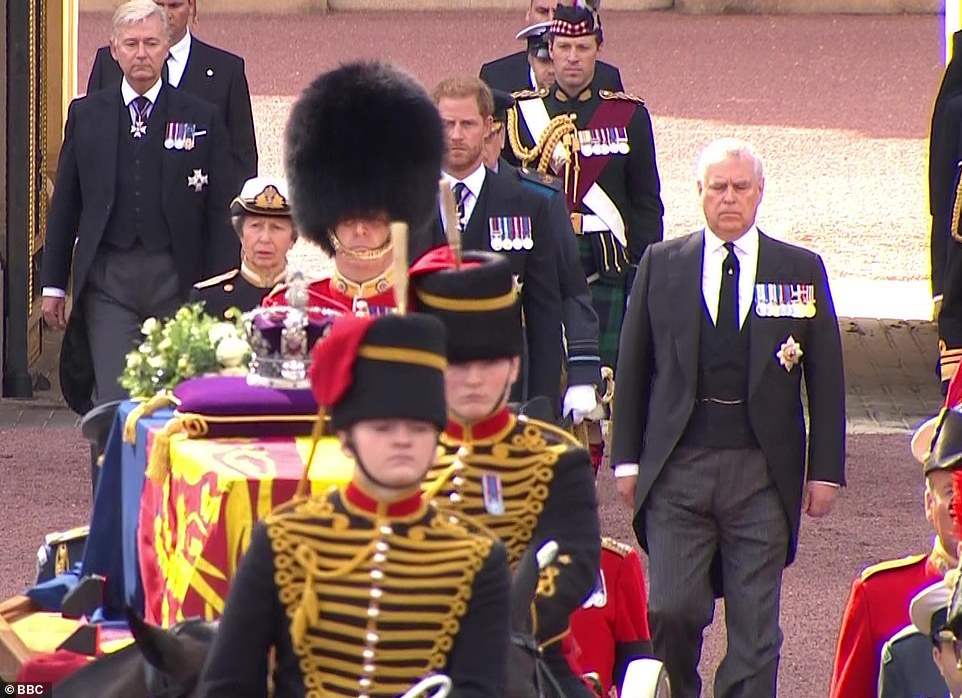 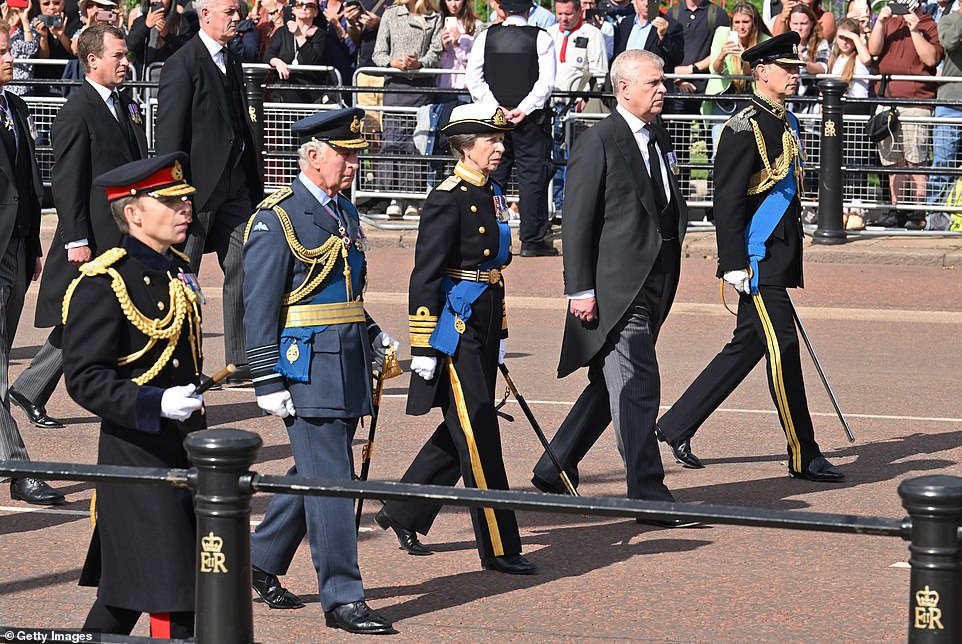 The Duke of York walked alongside his brothers, Prince Edward and King Charles III, and his sister Princess Anne 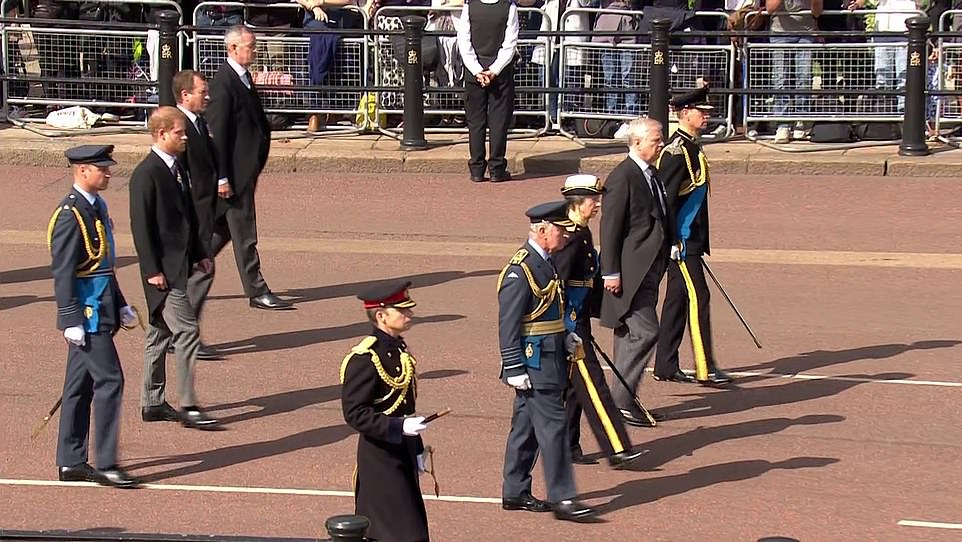 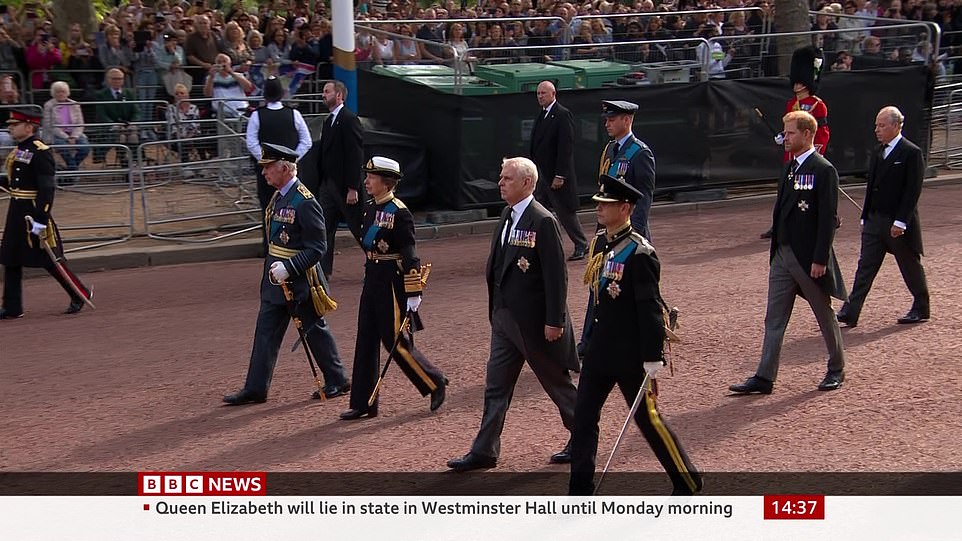 King Charles III, Princess Anne, Princess Royal, Prince Andrew, Duke of York and Prince Edward, Earl of Wessex walk behind the coffin during the procession for the Lying-in State of Queen Elizabeth II

Directly behind the coffin walked the King, the Princess Royal, the Duke of York and the Earl of Wessex, followed by the Prince of Wales, the Duke of Sussex and Peter Phillips.

Vice Admiral Sir Tim Laurence, the Duke of Gloucester and the Earl of Snowdon were behind.

Earlier this week, Andrew was heckled by a protester as he followed his mother’s coffin through Edinburgh.

The young man was filmed shouting ‘Andrew, you’re a sick old man’ as the disgraced Duke of York, 62, passed behind his mother’s hearse.

Seconds later footage show’s the heckler being shoved to the ground by angry mourners, as others in the crowd continued to shout ‘God Save the King’.

The youngster was then helped up and pulled away by a police officers, as those grieving the late Queen continued to push him.

He was then dragged away from the road he yelled ‘disgusting’ and ‘I’ve done nothing wrong’ as Prince Andrew, along with his siblings King Charles, Princess Anne and Prince Edward continued to walk behind the hearse carrying the Queen’s coffin.

Andrew, a Falklands War veteran who was exiled from public life amid the fallout from his role in the Jeffrey Epstein scandal, was not allowed to wear military dress for the occasion and instead wore a morning suit.

The prince will have to appear in civilian clothes at all the other public events to mourn his mother, although an exception will reportedly be made as a special mark of respect for the Queen at the final vigil in Westminster Hall.

Andrew gave up his HRH status and was stripped of all his honorary military roles, including Colonel of the Grenadier Guards, over his friendship with Epstein and allegations made by one of the paedophile’s ‘sex slaves’ Virginia Roberts that the royal sexually abused her when she was a minor under American law – claims that culminated in a bombshell US lawsuit and a multimillion-pound out of court settlement with no admission of liability. The Duke of York has consistently denied the allegations.