A post-Brexit trade deal could take more than THREE YEARS to agree, says Michel Barnier – as it emerges the ‘purist’ Eurocrat will be negotiating the future relationship

Michel Barnier today warned that a post-Brexit trade deal could take more than three years to agree – as it emerged he is likely to be thrashing out the package.

The EU negotiator had been expected to stand down with the rest of the commission next month, but there are claims he is about to be unveiled as the head of a new ‘UK Task Force’ to oversee talks on a future relationship.

The appointment would not be welcome in Downing Street, where he is regarded as a Brussels ‘purist’ who was one of the main obstacles to a deal.

Mr Barnier painted a grim picture of the struggles yet to come today as he said it will take years to ‘rebuild’ ties after Brexit.

‘We will have to renegotiate for one year, two years, three years, maybe more in some areas, to rebuild all that will have been pulled apart by the desire of those backing Brexit,’ he said. 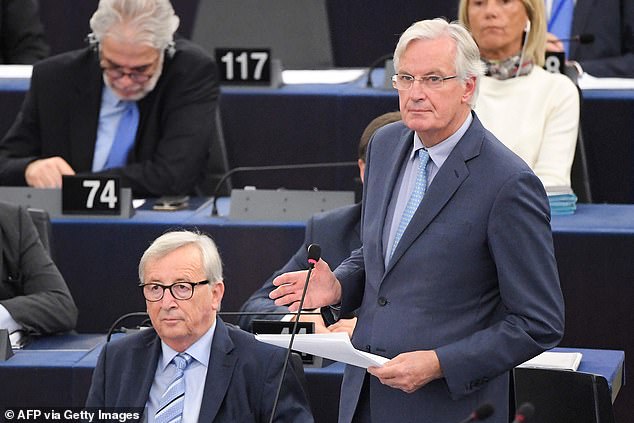 The intervention could cause serious problems for Mr Johnson, as his plans assume that a free trade deal will be in place by the end of 2020, when the transition period is due to end.

There is the potential for the transition – effectively a ‘standstill’ arrangement where the UK remains subject to EU rules – to be extended by up to two years.

But that would invoke fury from Tory Brexiteers who have been demanding that the UK is able to leave with No Deal at the end of 2020.

The Withdrawal Agreement Bill currently states that if the government wants to extend the transition it must put the issue before Parliament. 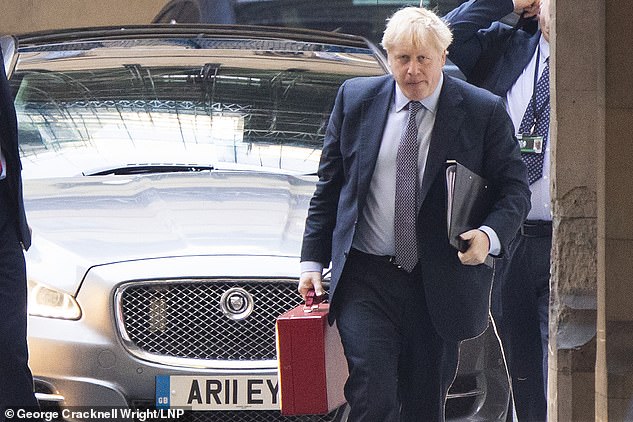 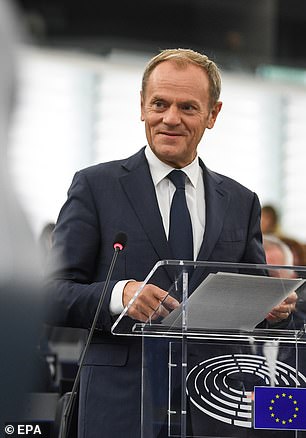 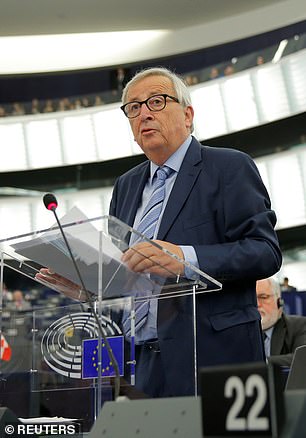 Donald Tusk (left) delivered another strong hint that the EU will agree a Brexit delay today – saying it would not be responsible for No Deal. Commission president Jean-Claude Juncker (right) delivered an extraordinary rant at the UK for dominating his tenure

However, Remainers including Labour’s Hilary Benn want to amend the legislation to guarantee that the Commons will get a vote on automatically prolonging the standstill period.

It is unclear what Eurosceptic hardliners will do if that bid is successful in the coming days.

Speaking at the European Parliament in Strasbourg today, Mr Barnier stressed that ratifying the divorce deal is only the start.

He said rules would have to be established to address the risk of environmental, tax and labour ‘dumping’, and in terms of cooperation for education exchanges, police, defence and foreign policy.