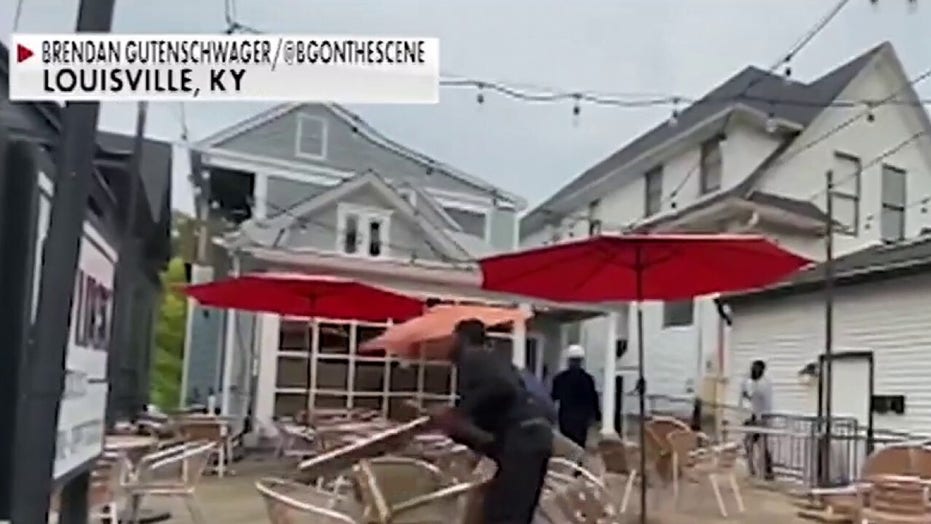 Louisville businesses bracing for more protests as unrest breaks out

At least 30 people were arrested in Oregon during unrest over the weekend, as Gov. Kate Brown announced that she has asked law enforcement officials to investigate “any alleged incidents” involving their officers.

The dozens arrested amid the protests in Portland included one juvenile and people from outside of Oregon, including California, Canada, Minnesota, Washington and Texas, the Multnomah Co. Sheriff's Office said Monday.

The minor, a 17-year-old Portlander, was charged with three counts of assaulting a public safety officer, riot, interfering with a peace officer, and disorderly conduct, officials said. Police withheld the person’s name as is required given their age.

The other people who were arrested ranged in age from 18 to 48. Their charges include assaulting a public safety officer, disorderly conduct, robbery, riot, aggravated harassment, harassment and escape. Two others received criminal citations for illegal possession of a loaded firearm and unlawful possession of a gun, police said.

Protests and unrest followed a relatively tame right-wing rally in the Oregon city, despite the presence of counter-protesters during the daytime event, according to officials and reports. 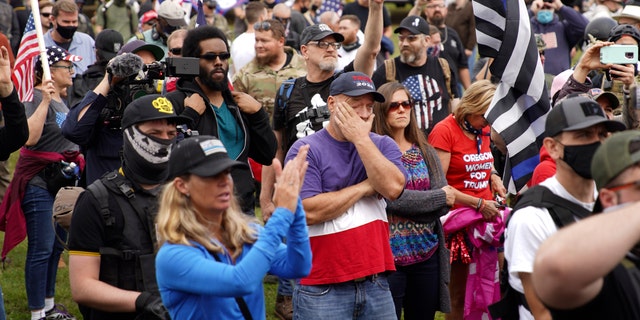 Several hundred people, dozens of them wearing militarized body armor, gathered to support President Donald Trump and his “law and order” reelection campaign Saturday afternoon. The attendance was far fewer than the 10,000 organizers had expected after tensions boiled over nationwide following the decision not to charge officers in Louisville, Ky., for the death of Breonna Taylor.

No serious injuries or violence were reported, officials said. Police were investigating an assault after one person who was documenting the event was pushed to the ground and kicked in the face, according to the Associated Press.

“Our Unified Command worked well to prevent violence before it started,” Hampton said in the statement. “Law enforcement officers performed a number of traffic stops and took weapons off the streets.” 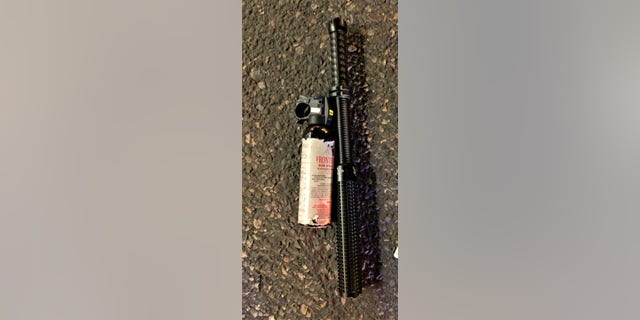 “On Saturday, Oregonians denounced hate, racism and violence,” Reese stated, adding that, “the Unified Command was able to help keep the peace.”

The protests that followed Saturday’s rally were declared an unlawful assembly and police began forcing demonstrators out after objects were thrown at officers, including full drink cans, firecrackers and rocks, police said. 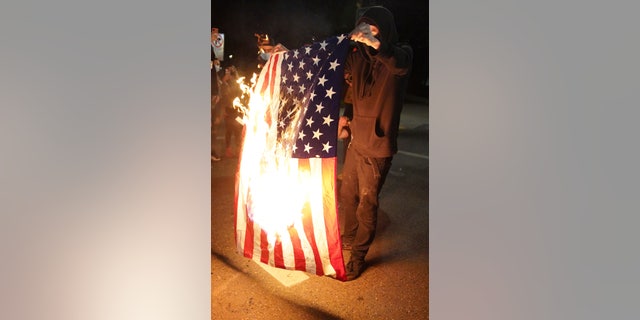 A protester burns an American flag while rallying at the Mark O. Hatfield United States Courthouse on Saturday, Sept. 26, 2020, in Portland, Ore. The rally came as Portland has seen nearly nightly protests since the police killing of George Floyd in late May. (AP Photo/Allison Dinner)

Hundreds of people had gathered at demonstrations in the downtown area of Oregon’s largest city when the unlawful assembly was announced just before midnight.

One man, later identified as Michael Colten, allegedly broke away from officers and ran two blocks with his hands in zip-tie cuffs before he was recaptured by police. Police also seized bear spray, a baton and a drone in separate stops or arrests.

WARNING: THIS VIDEO MIGHT CONTAIN GRAPHIC IMAGES OR LANGUAGE

Videos also showed police grabbing a news photographer and pushing him to ground, as he was trying to document them tackling and detaining a person on a sidewalk, The Oregonian/OregonLive reported. Freelance photographer John Rudoff was wearing a helmet with “PRESS” stickers affixed to it. He told the outlet on Sunday that he’s “physically OK but am quite annoyed.”

Another online video showed an officer apparently deploying a chemical spray in the face of a man who was yelling at police and waving a sign toward them.

On Sunday night, Gov. Kate Brown announced in a series of tweets that she had asked Reese, Hampton and Portland Police Chief Chuck Lovell to “review any alleged incidents involving officers from each of their agencies during joint operations” on Saturday night.

“Journalists and law enforcement officers have difficult jobs to do during these demonstrations,” she said in one of the four tweets, “but I do still believe that we can protect free speech and keep the peace.”