Some called it "disturbing" – while others view it as an act of "demystifying" the papacy – but every member of the royal court of Catholic Twitter seems to have an opinion on the video of Pope Francis expressing visceral annoyance at Catholics seeking to kiss his ring.

The video, filmed during the pope's day trip to Loreto, Italy, on Monday, first started making rounds in traditional Catholic circles, showing a smiling pope pulling back his hand during a parade of Catholics seeking to kiss his ring. 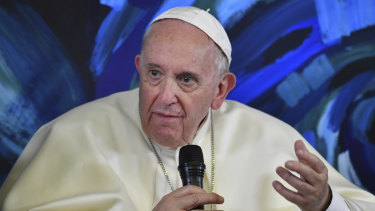 Indulgences are granted for specific acts of piety wherein the Church grants remission of sin and have long been a common practice, yet as Noonan observes, when it comes to ring kissing, in most Western nations, prelates have long discouraged the practice.

As of Monday, it seems quite clear that this pope does as well.

Medieval church history scholar Christopher Bellitto, a professor at Kean University, said the ancient tradition of kissing the pope's ring is not part of any formal protocol while greeting the pope, but one synonymous with patterns of behaviour for how one would greet kings, queens and emperors.

"When one greeted Ramses or Nebuchadnezzar, I'm sure it was common practice to bow and kiss one's ring."

Now, says Bellitto, "it's a leftover that is best left over."

"This isn't as much of a Francis story, as much as a story about the modern papacy," he added.

John Allen, a veteran Vatican journalist and editor of the online Catholic news site Crux, concurred, saying Francis' actions on Monday are one further move in a trend that's continued since Pope John XXIII to "dial down the tradition of subservience," which has traditionally marked the papacy over the centuries.

Francis' reaction, he believes, is one further step to demystify one of the world's most secretive institutions, and after the Second Vatican Council (1962-1965), popes have made gradual efforts to bring the office into the modern era.

In 1964, Pope Paul VI sent shock waves around Rome when he shipped off his bejewelled papal tiara for a charity tour around the United States to benefit Catholic Relief Services, making him the last pontiff to don the crown.

Pope John Paul I's brief 33-day papacy changed the course of papal liturgy when he eschewed the papal coronation ceremony for a Mass of inauguration. Pope John Paul II, who would jet around the world visiting 129 countries, abandoned the portable papal throne for the popemobile, allowing easier access to the masses that had come out to greet him.