Pope Francis has said that it is sacrilege for people to call Lionel Messi ‘God’.

The pontiff was speaking to host Jordi Evole on the ‘Salvados’ programme broadcast on Spanish TV channel La Sexta when he was asked about people referring to Messi as ‘God’.

Evole asked the Pope: ‘Is it sacrilege to say that Messi is God?’

And Pope Francis replied: ‘In theory it is sacrilege, you cannot say it, I don’t believe. Do you believe you can?’

When Evole replied that he thought it was fine to say that, the pontiff, a native of Argentina like Messi, responded with a laugh and said: ‘I don’t.

‘People say ‘God’ like they say ‘I adore you’. Adoring is only for God, they are expressions people use. ‘He is a god with a ball on the pitch’, they are popular ways of expressing oneself.’

‘But look how he plays, eh?’ Evole responded.

The pope replied: ‘Of course, he brings happiness, but he isn’t God.’

The Pope has previously admitted to being a football fan and follows Argentine top-flight side San Lorenzo de Almagro. 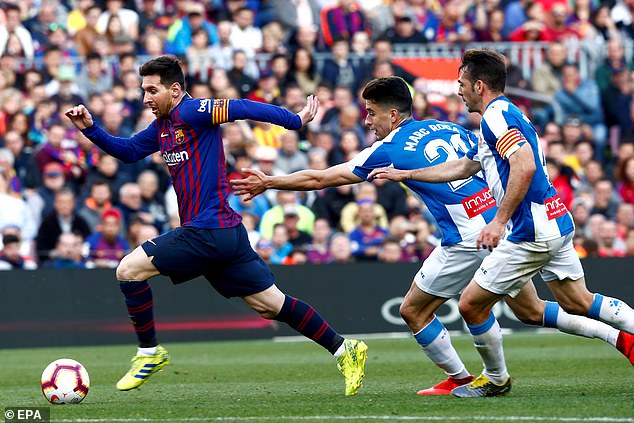 Walking on water? Lionel Messi sprints ahead of Espanyol players during their La Liga clash on Saturday March 30 2019

Messi is considered one of the greatest footballers of all time, with five Balon D’Or and five European Golden Shoe awards to his name.

He has spent his entire his professional career at Barcelona, where he has won nine Liga and six Copa del Rey titles and four UEFA Champions League cups.

However, he is yet to play in a World Cup-winning side for his native Argentina.