Voters are just as split on Brexit as the MPs! Polls find nearly as many people want no-deal as a referendum if May’s plan is defeated, while others says she should try getting more out of the EU

Voters appear to be just as split on Brexit as MPs – with nearly as many people wanting no deal as a second referendum.

With just two days to go until a crunch Commons showdown on Theresa May’s plan, polls have underlined the depth of divisions in the country.

Research by YouGov for the anti-Brexit Best for Britain campaign found 43 per cent want another national ballot if the PM’s package is defeated, as seems inevitable.

But 37 per cent were in favour of crashing out of the bloc without a deal in March, despite a wave of dire warnings about the consequences.

Another 13 per cent voiced a preference for Mrs May to try and get more concessions out of the EU so she can re-run the vote in Parliament. 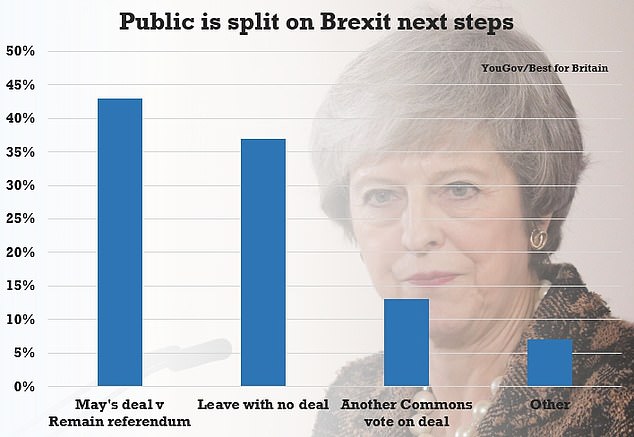 Research by YouGov for the anti-Brexit Best for Britain campaign found 43 per cent want another national ballot if the PM’s package is defeated, as seems inevitable

A separate poll for the Independent found 46 per cent wanted a second referendum, 28 per cent were against and 26 per cent did not know.

The survey of 1,500 people for BMG suggested 45 per cent backed staying in the EU, while 39 per cent favoured Brexit and 16 per cent said they did not know.

Some 45 per cent endorsed more negotiations with Brussels, while 34 per cent opposed further talks.

And just over a fifth did not know.

Mrs May is still facing a massive defeat in the crunch vote on Tuesday – with hardline Remainers and Brexiteers mobilising in a bid to thwart her plans.

Pro-EU rebels are said to be plotting a ‘coup’ against the government to give Parliament control of the negotiations with the EU and rule out a no-deal departure.

Tory ex-PM Sir John Major today called for Article 50 to be revoked to give the UK more time, saying it was the ‘only sensible course’.

Meanwhile, Labour is gearing up to stage a no-confidence vote immediately after the Brexit deal decision – potentially as early as Wednesday.

With just two days to go before the Commons vote on her withdrawal agreement, Mrs May pleaded with parliamentarians to ‘do what is right for our country’ and back her controversial exit plan. 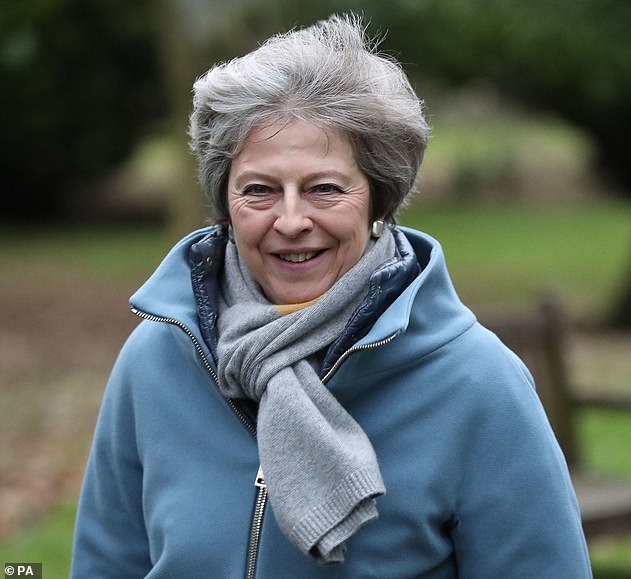 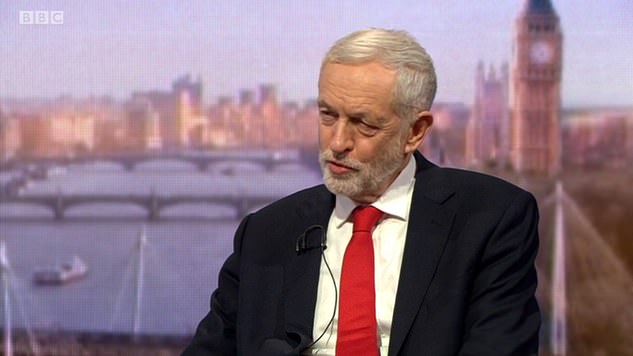 On the BBC’s Andrew Marr show today, Jeremy Corbyn made clear the party is on high alert to try to force the PM out and a general election

She said the UK risks crashing out of the EU without a deal or, if MPs are ‘unwilling’ to face the uncertainty of no deal, then the UK may not leave at all.

In what she described as the ‘biggest and most important decision that any MP of our generation will be asked to make’, the Prime Minister said it was time for politicians to ‘deliver’ for the people.

Writing in the Sunday Express, Mrs May said: ‘You, the British people, voted to leave. And then, in the 2017 General Election, 80 per cent of you voted for MPs who stood on manifestos to respect that referendum result.

‘You have delivered your instructions. Now it is our turn to deliver for you.’