Three men have been jailed after they stole more than £50,000 worth of mobile phones from seven stores in two weeks.

CCTV footage reveals the three criminals trying to escape on their mopeds after a police car races down the road at 1.20am on Wednesday, 29 August. 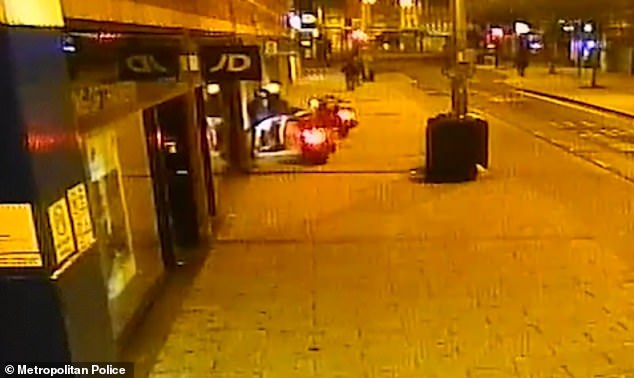 Reece Buttery, 23, stands outside the EE Store in Peckham, London, with the two mopeds while Troy Adolfess, 24, George Ventham, 23, are inside

Two mopeds can be seen parked outside the phone store as Buttery stands outside talking to another one of the gang who is inside the shop.

Suddenly a police car with its flashing lights on appears and Buttery races to his moped as Ventham and Adolfess quickly crawl out from the store.

As the officers approach, Ventham manages to get onto the back of the moped ridden by Buttery and both drive off.

Adolfess then comes out of the shop and tries to run from officers. One of the officers follows him and manages to get him on the ground.

He is Tasered, detained and arrested and his mobile phone is also seized by police.

Ventham and Buttery are seen coming back up the road to try and help Adolfess escape on the CCTV, but quickly flee. 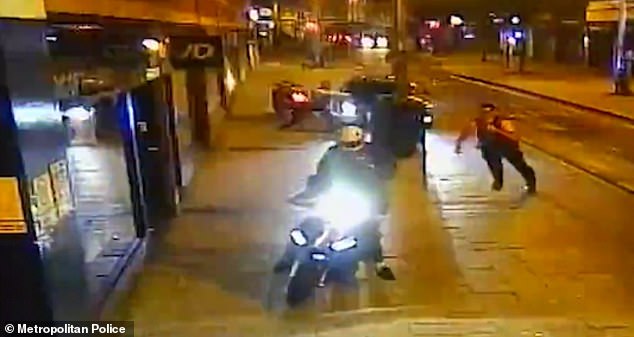 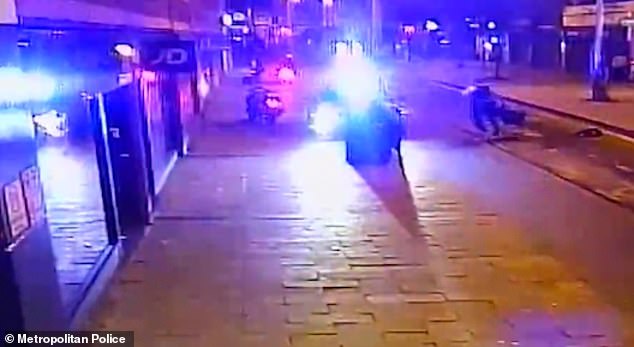 The police officer who chased them is then seen running back up the road towards the other officer who is detaining Adolfess while holding a large black bag.

Officers from Operation Venice, which tackles moped enabled crime, connected the defendants to a linked series of similar offences.

The team searched premises across south London and found CCTV footage and phone evidence which linked Adolfess to six other incidents.

Analysis of his phone linked Ventham to all of the offences and Buttery to the last incident. 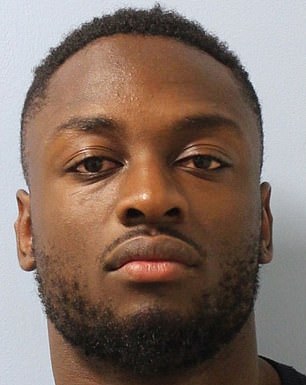 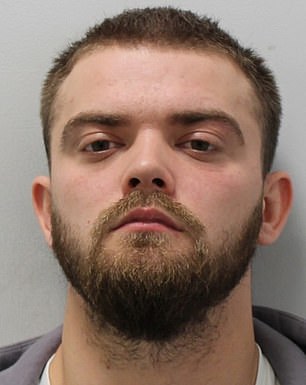 Troy Adolfess, 24, left and Reece Raymond Roy Buttery, 23, right, were both jailed for two-and-a-half years after pleading guilty to conspiracy to commit burglary

On 11 September, Ventham was arrested outside his home where he attempted to flee but was caught and detained. A large quantity of drugs were found at his home and he was further arrested.

On 13 September, Buttery was arrested by Operation Venice officers outside his home address.

All three men appeared at London Inner Crown Court yesterday after pleading guilty to conspiracy to commit burglary between 14 August and 29 August 2018. 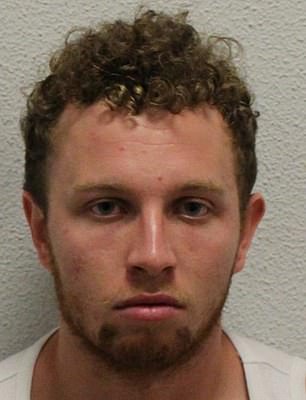 George Ventham, 23, pictured, was jailed for two-and-a-half years and also given an eight month consecutive sentence for possession with intent to supply cannabis

Adolfess, Ventham and Buttery were each sentenced to two-and-a-half years in jail. Ventham was also given a further eight months for possession with intent to supply cannabis which he had pleaded guilty to. These sentences will run consecutively.

The court heard that Adolfess, Ventham and an unidentified suspect also raised the O2 store on High Street, Sutton on 14 August.

The other stores robbed included an EE Store, High Street, Sutton on 16 August, between 01:40 and 01:56hrs by Adolfess, Ventham and an as yet identified suspect.

The EE Store, Powis Street, Woolwich, on 24 August, between 02:38 and 02:40hrs by Adolfess, Ventham and an as yet identified suspect.

Adolfess, Ventham and Buttery raided the EE Store, High Street, Bromley on 26 August, between 03:40 and 03:45hrs together.