The missing girl with no name: Police search for nine-year-old who vanished after getting into a London minicab TEN MONTHS ago and fear her identity may since have been changed

Police are searching for a nine-year-old girl who hasn’t been seen she was picked up in a mini cab ten months ago.

A grainy passport photo of the girl has been released by police who are re-appealing for witnesses.

The nine-year-old is was last seen getting into a taxi from Beresford Road, in Southall, west London, last February.

Police said they are not releasing the girl’s name and fear it may have changed since she was last seen.

Officers are keen to track down the driver and to find where the child could be now. 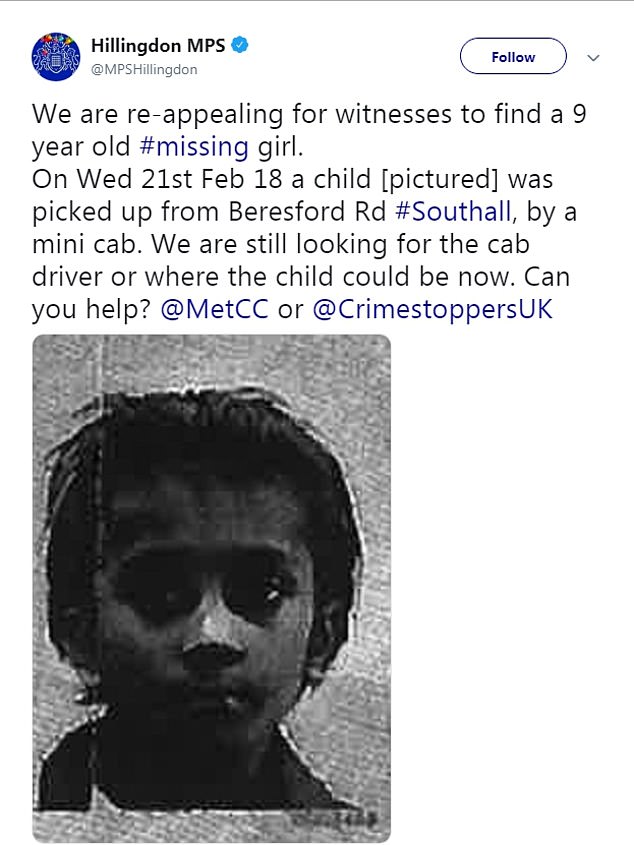 Police decided on the appeal as a ‘last resort’, according to MyLondon.

A spokesman said: ‘This case has been actively investigated and we are in touch with other agencies to help find this girl.’

The police will also not be releasing the name into the public domain at this stage.

A tweet from the Hillingdon MPS account says: ‘We are re-appealing for witnesses to find a 9 year old girl.

‘We are still looking for the cab driver or where the child could be now. Can you help?