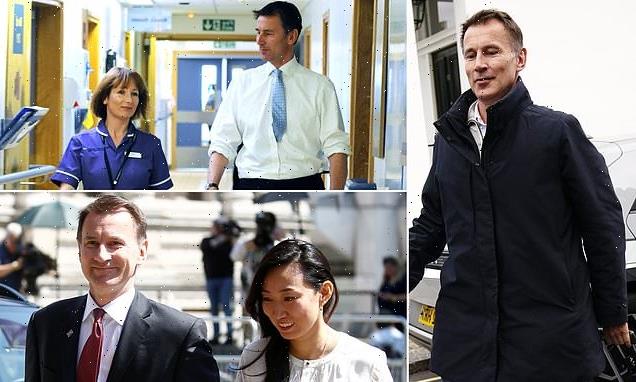 Liz Truss calls up Hunt: PM turns to experienced Cabinet operator – the longest-serving health secretary in history who twice stood for Tory leader – to take charge of Treasury months after he championed slashing tax even LOWER than Kwasi Kwarteng

Liz Truss has turned to experienced Cabinet minister Jeremy Hunt to take charge of the Treasury after she dramatically sacked Kwasi Kwarteng.

The Prime Minister has appointed the 55-year-old as her new Chancellor as she battles to save her premiership with efforts to soothe mutinous Tory MPs and volatile financial markets.

The appointment marks a dramatic return to Government for Mr Hunt, who appeared to admit just three months ago that his time in frontline politics was at an end.

In July, when he dropped out this year’s Tory leadership contest that was ultimately won by Ms Truss, Mr Hunt said it had ‘become obvious to me you only get one big shot at this’.

He went on to back Ms Truss’s rival Rishi Sunak after being knocked out the race himself.

Mr Hunt, a multi-millionaire married father-of-three, had previously stood to be Conservative leader in 2019, when he was defeated in a run-off by Boris Johnson.

But Mr Hunt is now back at the heart of Government where he has previously served in one of the ‘great offices of state’ as Foreign Secretary.

He is also the longest-serving Health Secretary in history following his near-six year spell in the role.

When he enters the Treasury, Mr Hunt will face immediate questions over the economic agenda he will oversee.

During his second failed bid to become PM this summer, Mr Hunt had championed cutting coporation tax to 15 per cent.

This is below the 19 per cent rate that his sacked predecessor Kwasi Kwarteng had been aiming for and which are viewed as having played a part in last month’s mini-Budget meltdown. 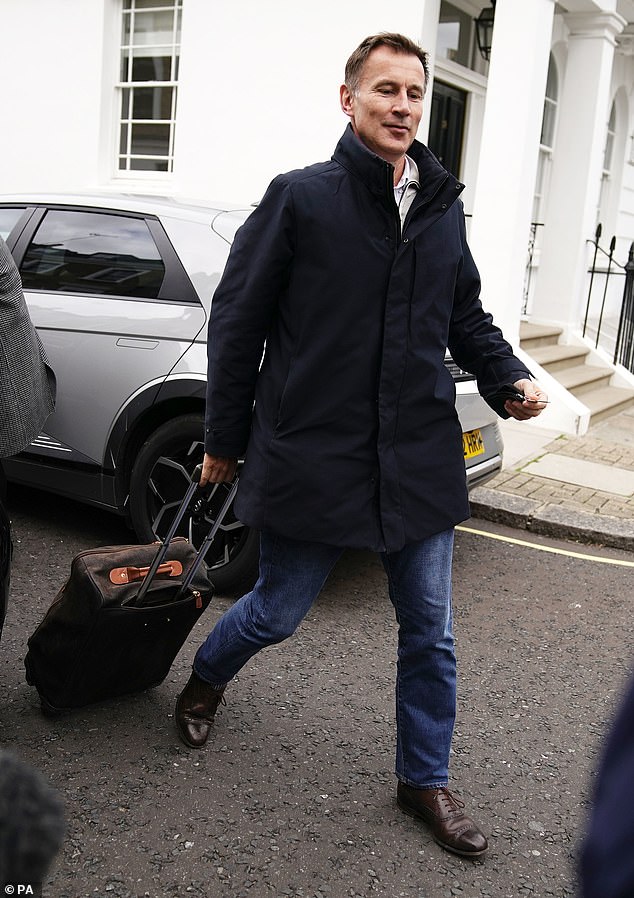 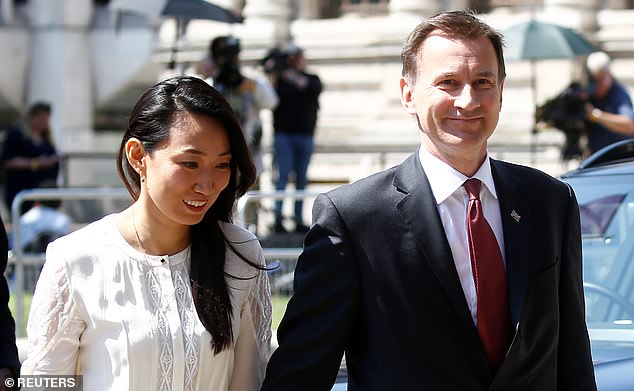 On a visit to China in 2018, Mr Hunt mistakenly referred to his Chinese wife Lucia Guo as ‘Japanese’

After entering Parliament as MP for South West Surrey in 2005, Mr Hunt became a key ally of David Cameron after supporting his Tory leadership bid.

He served in a series of shadow ministerial roles as one of the leading ‘Cameroons’ hoping to return the Conservatives to power.

Under the coalition government that followed the 2010 general election, Mr Hunt took on the role as Culture Secretary during which he helped oversee the 2012 Olympics.

He then moved to the Department of Health and oversaw the running of the NHS for nearly six years to become the longest-serving Health Secretary in British history.

His spell in charge saw a major battle with junior doctors – after they went on strike over changes to their contracts – with saw his popularity with voters plummet.

But, prior to leaving the health brief, Mr Hunt managed to secure a £20billion boost to the NHS budget as a 70th ‘birthday present’ for the health service.

There have since been questions about Mr Hunt’s record as health secretary in the wake of the Covid crisis, including over how well-prepared he had left the NHS for a pandemic.

Theresa May, the then prime minister, shuffled Mr Hunt to Foreign Secretary to replace Boris Johnson following his resignation in protest over Brexit policy in 2018.

It meant that, as well as Mrs May and the then Chancellor Philip Hammond, the top of Government was dominated by figures who had backed Remain at the EU referendum. 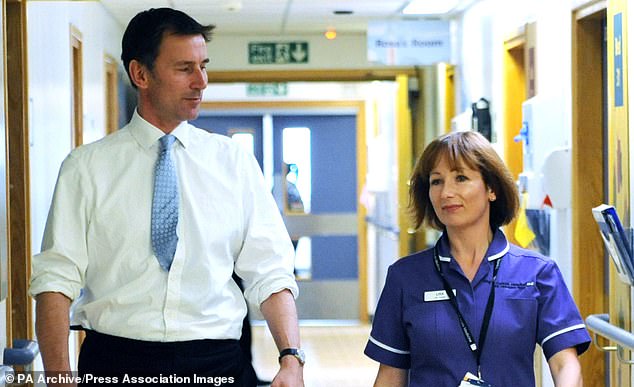 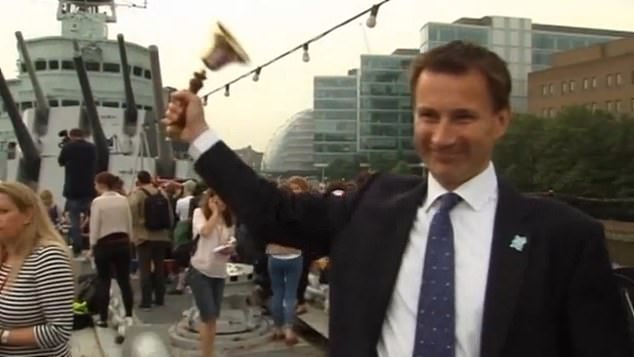 Back in 2012, the then Culture Secretary narrowly avoided injuring bystanders when a bell he was ringing flew off its handle at an Olympics celebration

When the Brexit chaos at Wesminster led to Mrs May’s resignation, Mr Hunt announced he would stand for the Tory leadership but was a distant runner-up to winner Mr Johnson.

He refused to serve in Mr Johnson’s Government after rejecting a demotion to Defence Secretary, although Mr Hunt let it be known he would have been happy to have carried on as Foreign Secretary.

Until today, he had since spent his time in Parliament on the back benches of the House of Commons and took on the chairmanship of the Health and Social Care Select Committee.

He had used that role to offer himself as a constructive critic of the Government’s handling of the Covid crisis.

Despite his long experience in frontline politics, Mr Hunt has been prone to a gaffe such as in 2018 when – on a visit to China – he referred to his Chinese wife Lucia Guo as ‘Japanese’.

Back in 2012, he narrowly avoided injuring bystanders when a bell he was ringing flew off its handle at an Olympics celebration.

Broadcasters have also been known to struggle with Mr Hunt’s surname, with a number having inadvertently referred to him with a C-word expletive.