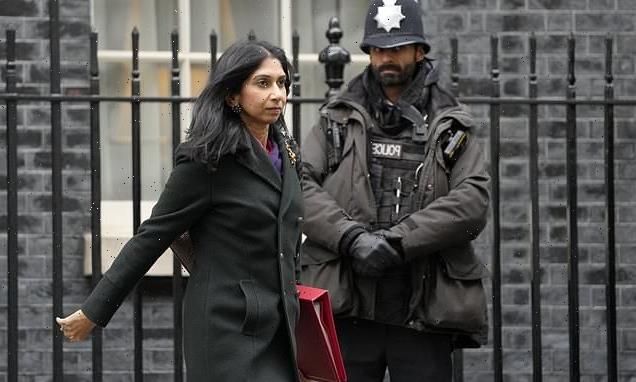 Government plans to deport asylum seekers to Rwanda are lawful, the High Court ruled today – paving the way for ministers to prepare a new deportation flight.

Priti Patel announced the policy in April as part of a ‘world-first agreement’ to stop migrants from crossing the Channel, but the first flight – due to take off on June 14 – was grounded after legal challenges to individual removals and the policy as a whole.

Today, two senior judges rejected arguments that the plans to provide one-way tickets to the east African nation were unlawful, but ruled in favour of eight asylum seekers whose cases were ‘not properly considered’.

Lord Justice Lewis and Mr Justice Swift ruled their cases should be referred back to Home Secretary Suella Braverman to be ‘considered afresh’. 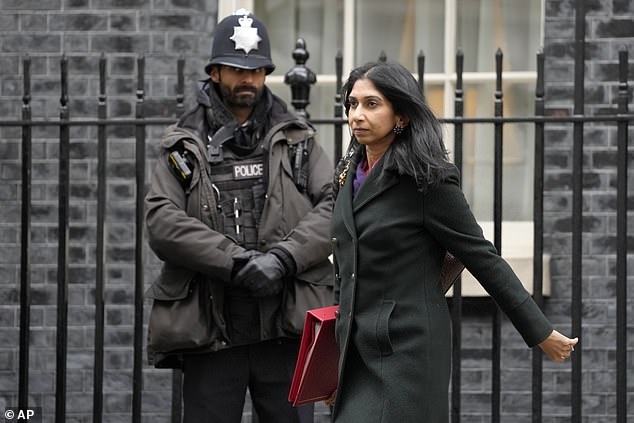 The news is a boost to Home Secretary Suella Braverman, who said it would be her ‘dream’ to send a flight of Channel migrants to Rwanda

At a five-day hearing in September, lawyers for several asylum seekers – along with the Public and Commercial Services union (PCS) and charities Care4Calais and Detention Action – had argued the plans are unlawful and that Rwanda ‘tortures and murders those it considers to be its opponents’.

UNHCR – the UN Refugee Agency – intervened in the case, telling the court that Rwanda ‘lacks irreducible minimum components of an accessible, reliable, fair and efficient asylum system’ and that the policy would lead to a serious risk of breaches of the Refugee Convention.

At a further hearing in October, lawyers for the charity Asylum Aid also challenged the policy, arguing that the procedure is ‘seriously unfair’ and also unlawful, with asylum seekers put at risk of being removed without access to legal advice.

The Home Office defended the claims, with lawyers arguing the memorandum of understanding agreed between the UK and Rwanda provides assurances that ensure everyone sent there will have a ‘safe and effective’ refugee status determination procedure.

People deported to Rwanda will be provided with ‘adequate accommodation’, food, free medical assistance, education, language and professional development training and ‘integration programmes’, judges were told, as part of plans that have cost at least £120 million.

And in a summary of his ruling, Lord Justice Lewis said today: ‘The court has concluded that it is lawful for the Government to make arrangements for relocating asylum seekers to Rwanda and for their asylum claims to be determined in Rwanda rather than in the United Kingdom.

‘On the evidence before this court, the Government has made arrangements with the government of Rwanda which are intended to ensure that the asylum claims of people relocated to Rwanda are properly determined in Rwanda.’ 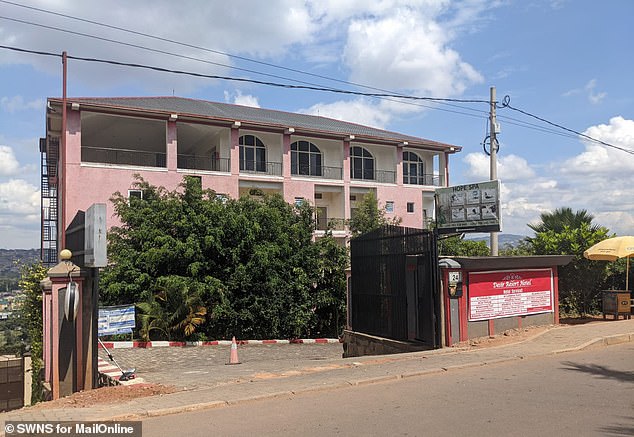 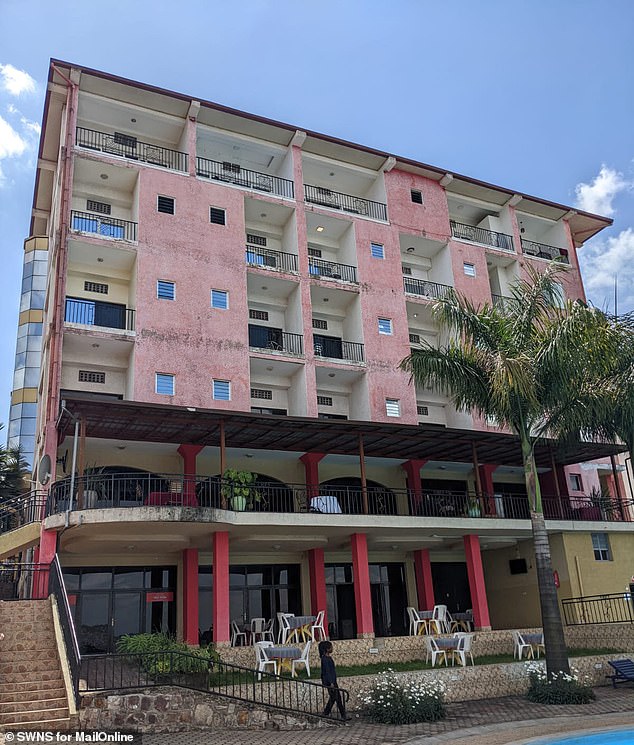 The Desir Resort Hotel has a swimming pool, an outside bar and restaurant and spa facilities

However, the judge added: ‘However, the Home Secretary must consider properly the circumstances of each individual claimant.

‘The Home Secretary must decide if there is anything about each person’s particular circumstances which means that his asylum claim should be determined in the United Kingdom or whether there are other reasons why he should not be relocated to Rwanda.

‘The Home Secretary has not properly considered the circumstances of the eight individual claimants whose cases we have considered.

‘For that reason, the decisions in those cases will be set aside and their cases will be referred back to the Home Secretary for her to consider afresh.’

The news is a boost to Home Secretary Suella Braverman, who said it would be her ‘dream’ to send a flight of Channel migrants to Rwanda outlined her ‘ultimate goal’ of cutting immigration into the UK to tens of thousands.

However, Labour branded the Government’s Rwanda plan ‘unworkable’ and ‘unethical’.

Shadow home secretary Yvette Cooper said: ‘The Rwanda scheme is a damaging distraction from the urgent action the Government should be taking to go after the criminal gangs and sort out the asylum system. It is unworkable, unethical, extortionately expensive.

‘Ministers have already written a £140m cheque to Rwanda without the policy even starting, with millions more promised even though Home Office officials say there’s no evidence it’ll provide a deterrent and it risks making trafficking worse.

‘The Rwandan government has said it can only process 200 people a year – or 0.5% of Channel crossings this year. It’s no surprise that the Home Secretary herself has described the scheme as a failure.

‘The Conservatives have let criminal gangs take hold in the Channel, while their own asylum decision making has collapsed. Labour have proposed serious policies to target the gangs and clear the backlog. Instead of spending millions on Rwanda the Government should put that money into pursuing the criminals who are organising these dangerous boats.’ 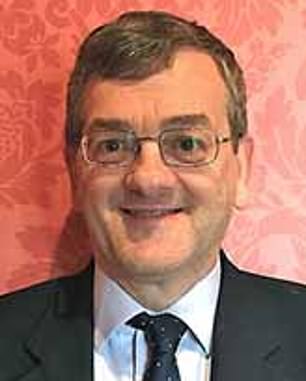 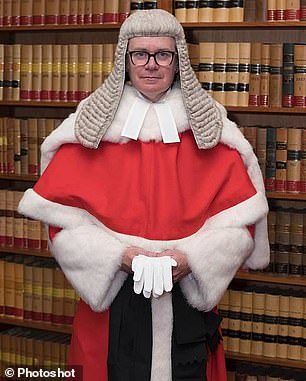 Enver Solomon, CEO of the Refugee Council, said he was ‘very disappointed’ by the judgment.

‘Treating people who are in search of safety like human cargo and shipping them off to another country is a cruel policy that will cause great human suffering,’ he said.

‘The scheme is wrong in principle and unworkable in practice. The possibility of being sent off to Rwanda is causing huge distress to those we work with, including young people who are becoming extremely anxious and in some cases self-harming.

‘It is a hugely expensive policy that is unlikely to reach the scale claimed by the Government. The Home Office’s own evidence shows that deterrence measures such as this simply don’t work – they just force people to take ever more dangerous journeys.’

Josie Naughton, chief executive of migrant charity Choose Love, said the ruling ‘flies in the face of international commitments and accountability’, adding that campaigners will ‘continue to fight’ for the ‘human right to seek asylum’.

She said: ‘Today’s ruling will tear apart families, prolong persecution and put victims of torture and trauma in danger once again.

‘A dark cloud is now hanging over the UK’s once celebrated record on human rights. Hostility has come at the expense of compassion, and the country is turning its back on the principle that all should have rights to live in freedom and without pain. It sets a dangerous precedent for evading international and moral commitments towards those seeking asylum.

‘Human rights exist regardless of today’s ruling’, she said, adding that campaigners will ‘continue to stand up for humanity and dignity.’

And Sonya Sceats, chief executive at Freedom from Torture, said the charity was ‘concerned that today’s decision fails to recognise the serious risks that the Rwanda removals policy presents for survivors of torture.’

Rwandan government spokeswoman Yolande Makolo said: ‘We welcome this decision and stand ready to offer asylum seekers and migrants safety and the opportunity to build a new life in Rwanda.

‘This is a positive step in our quest to contribute innovative, long-term solutions to the global migration crisis.’