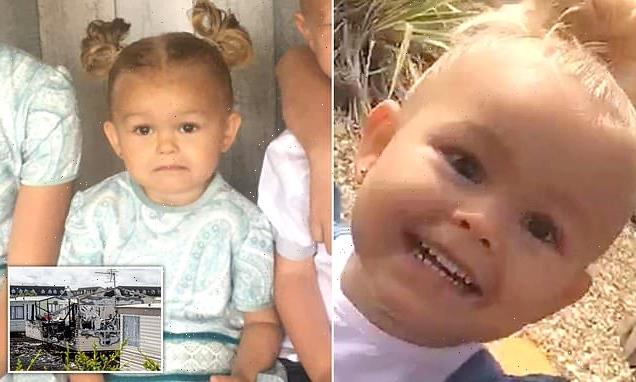 Pictured: ‘Gorgeous’ girl, two, killed in caravan fire that almost claimed her mother and three siblings as family say ‘our hearts are broken’

Tributes have been paid to a ‘gorgeous’ two-year-old girl killed in a horror fire at a caravan she was staying at with her mother and three siblings.

Little Louisiana-Brook died after the fire at Sealands Caravan Park in Ingoldmells, Lincolnshire, on Monday night.

Her mum Natasha Broadley and three of the tragic toddler’s siblings managed to escape the holiday home as it went up in flames.

The youngster’s heartbroken grandmother Donna Broadley posted a series of snaps of the youngster as she enjoyed her time at the holiday park.

In an emotional Facebook post, she said: ‘Our hearts are broken as ‘wee wee’ was our baby of our family.

‘Tash gave her everything, she was her right leg. Our hearts are broken.

‘We as a family will be here for Tash and my grandchildren.’ 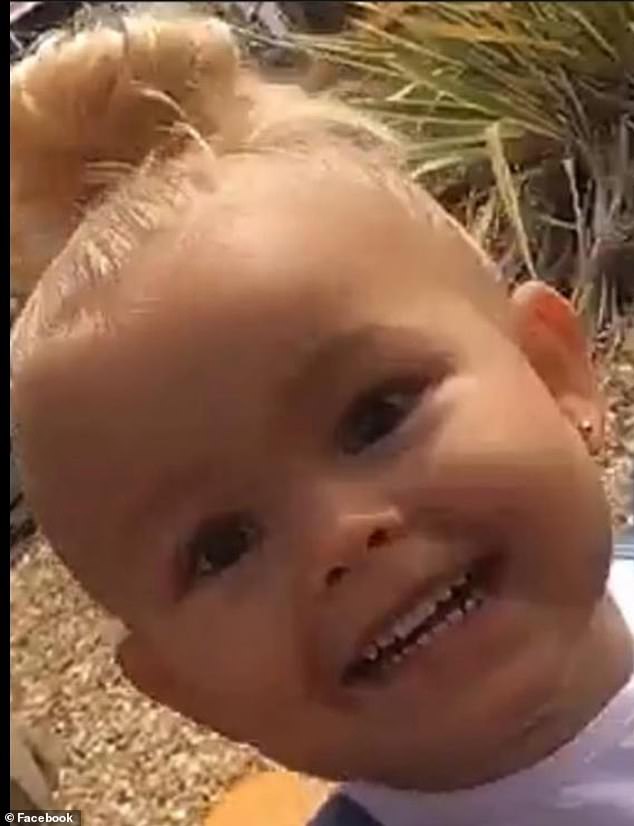 Tragic Louisiana-Brook Broadley died following the horror at Sealands Caravan Park in Ingoldmells, near Skegness on Monday night, while mother Natasha and the other children managed to escape 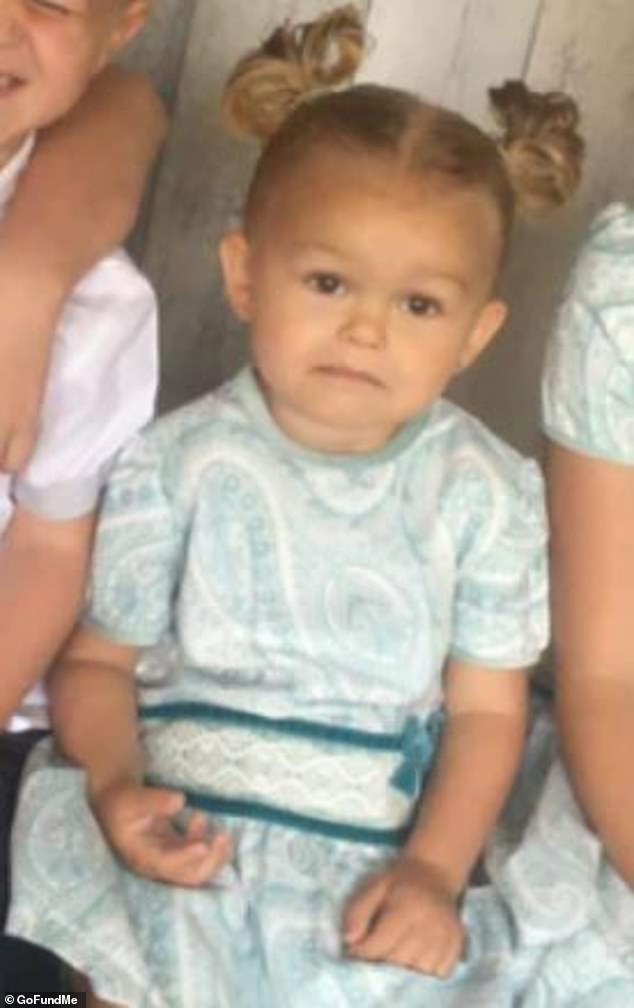 Tributes have now flooded in for the toddler, who was originally from Newark, Nottinghamshire

A GoFundMe page has been launched to help Natasha – from Newark, Nottinghamshire, and known as Tash – and her family following the tragedy.

Her friend Laurie Selfridge, who started the fundraiser, said: ‘Louisiana-Brook was the most beautiful amazing little girl. She was a sweet angel.

‘Natasha adored all her children but she was like Natasha’s shadow.

‘Their worlds have been torn apart in pure tragedy.

‘It’s soul destroying, we all love Tasha and her children. We’re a tight community in Newark.

‘It’s totally knocked all of us, but the love being shown is unreal.’

Lincolnshire Police said the blaze at 10.30pm on Monday night was ‘unexplained’.

The base of the caravan remained intact but the roof and walls were destroyed as charred debris was scattered around the area.

The mother and three children received medical attention for smoke inhalation at Pilgrim Hospital, Boston, and have since been discharged to spend time with their relatives.

Around 50 people from nearby caravans were evacuated and had to stay in emergency accommodation at the Laver Leisure site. 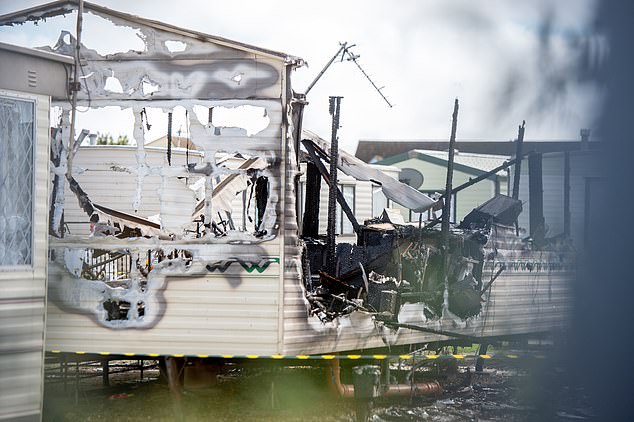 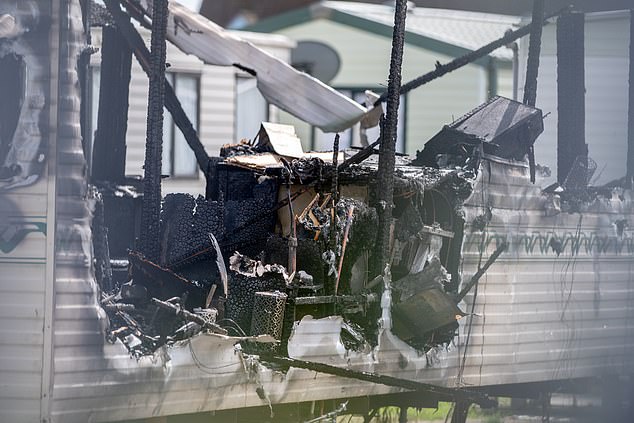 The child passed away at Sealands Caravan Park in Ingoldmells, near Skegness, following the blaze at 10.30pm 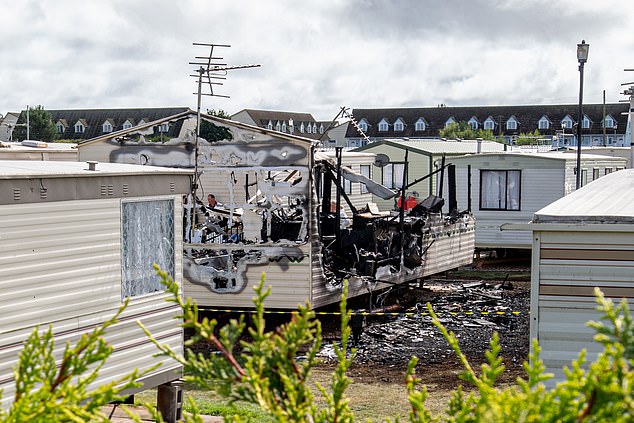 Leigh Sleafer, whose caravan was a few down from the fire, said the deadly blaze had left her seven-year-old autistic son being sick and traumatised her other children.

She told MailOnline: ‘I’m not really sure what happened as I was in the shower and had just settled my children down.

‘My friend was outside, we saw what I thought was a heavy cloud of smoke and thought I heard kids shouting.’

She continued: ‘Next thing I knew was my friend came in saying there was a caravan on fire.

‘One of my children is autistic and was so distraught he was being sick so I had to get them all away from the fire and took them down the road to work out what we was going to do. We are now at home safe but very traumatised from it all.’

She added: ‘I’m heartbroken for the family and for all that saw this… so tragic. Sleep tight little angel.’ 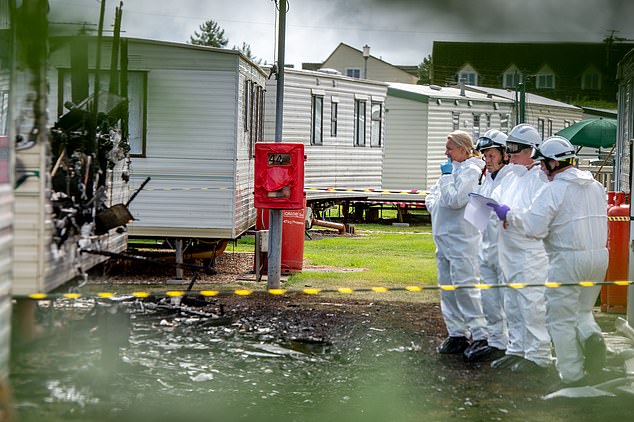 Ms Sleafer said she left the caravan site in the middle of the night with her children and drove them three hours home to Bedfordshire to ‘feel safe with their dad’.

Another witness said: ‘It was heartbreaking to see, someone ran to me asking me for my fire extinguisher because there were two little ones in van.

‘I tried to tell her my little extinguisher wouldn’t help.’ Another woman said on Facebook: ‘My sister was in the van next door but was out at the time.

‘She was just walking back to the van when it happened but by sounds it was very very bad. It exploded. That poor women and her five kids.’

And another added: ‘So sad, we’re staying on this site and didn’t know anything about it until just now when we tried to walk out of the site and it was all blocked off.’

One holidaymaker, who was also staying in a caravan close to the fire, said: ‘It was scary how quickly it went up.’

Shaun Walker, 54, was on an adjoining caravan site, just yards from the scene, when he became aware of the blaze.

He said: ‘Our caravan site sits right next door and all of a sudden I smelt the smoke. I went outside and saw the caravan on fire. The flames were really high and crisping.

‘People were running around in panic, I just thought to myself ‘I hope dear God that no one is inside, and that all the adults and children got out.’ 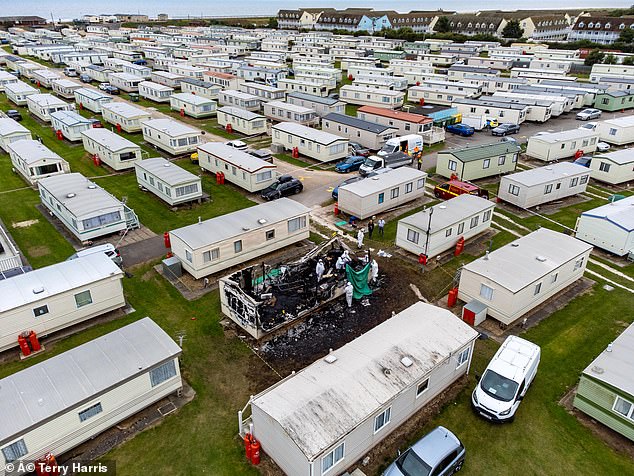 One holidaymaker, who was also staying in a caravan close to the fire, said: ‘It was scary how quickly it went up’ 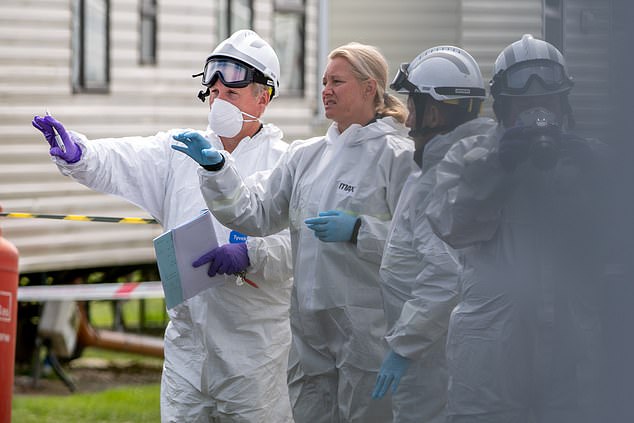 Senior Investigating Officer Detective Inspector Jo Fortune said: ‘This is a devasting incident for all involved’

‘I tried to climb the perimeter fence of our caravan site to go and help. I wanted to go and help, but the fence was just too high and has spikes on the top.

‘The firemen arrived and were damping it down, so I went back to my caravan. My neighbour rang 999 and they told us all to get outside in case our gas canisters exploded. It was just awful.’

The Sealands site is owned by Laver Leisure who also own a number of other sites which in total house almost 2,000 caravans in the Skegness and Ingoldmells area.

Crime Scene Investigation staff wearing protective white boiler suits were at the scene today. The area around the caravan was sealed off with yellow and black tape.

Councillor for Skegness North Carl Macey said: ‘I feel sorry for those lives that this news is going to touch in such a detrimental way.

‘My thoughts are with the family that will now be left with this devastating news.

‘I wish the family the very best of luck going forward, as I’m sure they’ll need help and guidence with grieving because it is such a horrendous situation.’

He added: ‘You wouldn’t wish this upon anybody.’

Chief Superintendent Kieran English said the cause of the fire remained ‘unexplained’.

He said: ‘At this point of time it is unexplained, but hopefully as the day progresses we may have some indication in terms of the causation of the fire.’

Mr English added: ‘I’ve got children. This is absolutely tragic. My thoughts and my prayers go to the family and their friends at this really sad time.’

He urged any witnesses to the blaze to contact his officers.

Mr English said: ‘We’ve a long way to go before we can ascertain the facts in this tragic incident. 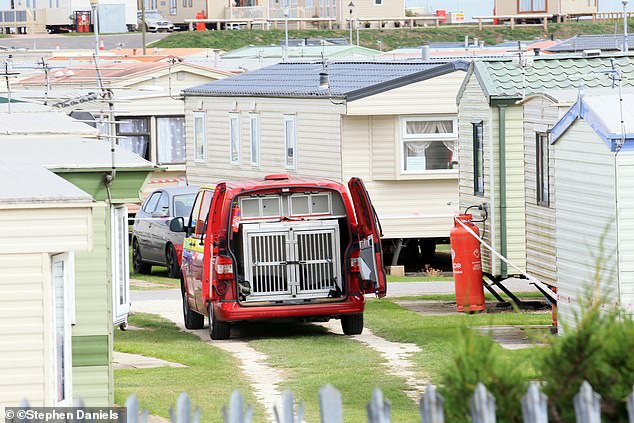 Police said an investigation team would be at the scene throughout the day, carrying out the initial stages of the inquiry 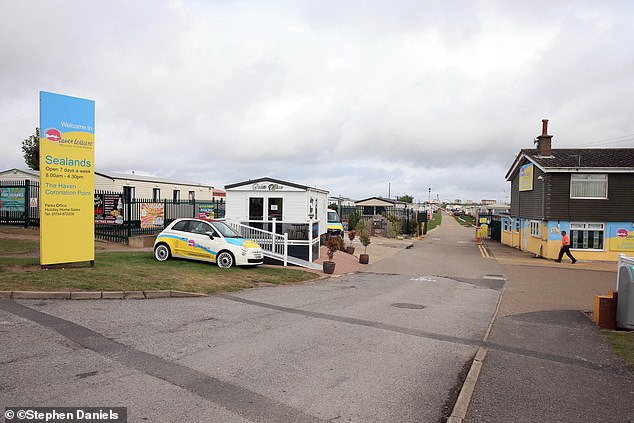 Senior Investigating Officer Detective Inspector Jo Fortune said: ‘This is a devasting incident for all involved.

‘We are in the very early stages of our investigations and the circumstances which led to the fire are not yet clear. We will be working closely with specialist teams to understand what happened.

‘We would like to appeal to anyone who was there last night and has not yet spoken to police to come forward, and for anyone with video footage to please share that with officers to add to our intelligence of the incident.

‘This is particularly harrowing, with a family losing a child, and we’d ask that people remember those victims and not share footage online.’

Police said an investigation team would be at the scene throughout the day, carrying out the initial stages of the inquiry.

‘On arrival our five attending crews found that the fire was already well-established and aggressive firefighting was needed to extinguish it.

‘A family had been in the caravan when the fire broke out and whilst the mother was able to escape with three of her children, unfortunately her youngest daughter, aged 2, has sadly lost her life.

Matt King, Divisional Commander for East Division at Lincolnshire Fire and Rescue, said: ‘Our thoughts and deepest condolences are with the family at this time.

‘Our Fire Investigation Team will be working with CSI colleagues from Lincolnshire Police to complete a full investigation into the cause of the fire.

‘All firefighters have been offered welfare support, and once investigations are complete, local fire crews and our community fire safety team will be on hand to talk to people in the area and address any fire safety concerns, at what will be an upsetting time.’

A spokesman for Sealands Caravan Park said: ‘We are deeply saddened by what has happened and we will be assisting police with their inquiries and helping affected families.

‘We cannot make any other comment while the investigation is ongoing.’