(Reuters) – California fire investigators on Thursday concluded that a major 2017 wildfire was caused by privately owned electrical equipment, prompting the state’s new governor to estimate that PG&E Corp’s potential wildfire liabilities could be almost cut in half. 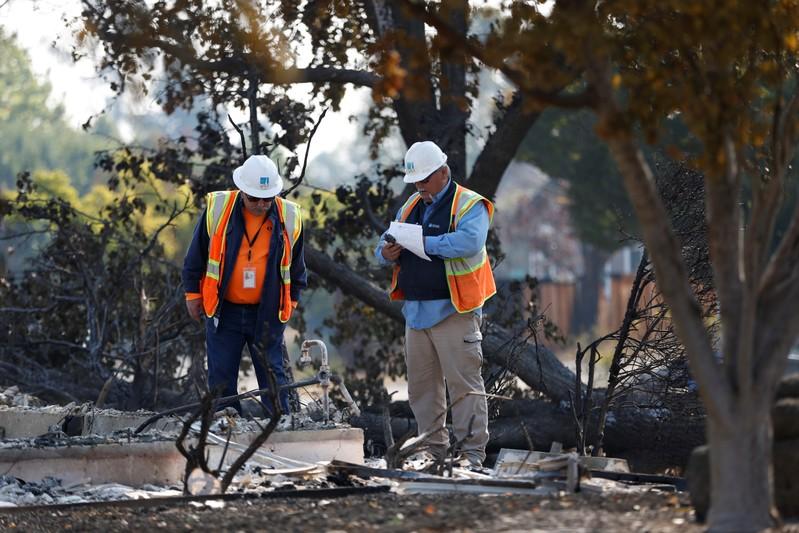 Investors in the utility, which is preparing to file for bankruptcy, initially sent its shares up 80 percent, but PG&E said it still faced huge potential liabilities from other fires. That would include the Camp Fire, the state’s deadliest, in 2018.

“Regardless of today’s announcement, PG&E still faces extensive litigation, significant potential liabilities and a deteriorating financial situation,” the utility said in a statement.

As of Thursday afternoon, PG&E still planned to seek bankruptcy protection around Monday, despite the findings on the 2017 Tubbs Fire, a person familiar with the matter said.

In a brief statement, the California Department of Forestry and Fire said its investigators “did not identify any violations of state law, Public Resources Code, related to the cause of this fire.” It did not mention PG&E specifically.

PG&E is facing liabilities that could potentially exceed $30 billion because of the possibility that its equipment was involved in starting the devastating wildfires in the state in 2017 and 2018. The mounting liabilities have sent investors fleeing and prompted downgrades of its credit ratings, pushing it to the brink of bankruptcy.

Public outcry over PG&E’s spotty safety record has made lawmakers unwilling to back bailout legislation for the utility, which provides electricity and natural gas to 16 million customers in northern and central California.

California Governor Gavin Newsom told reporters outside his office in Sacramento that the Tubbs Fire liabilities accounted for about half of the $30 billion estimate and called the report a surprise. He added, however, that he did not know whether a reduction in liability would lead the company to pull back from a possible bankruptcy filing.

PG&E will continue to face lawsuits from fire victims and survivors who may not accept the premise of the CalFire report, Newsom said.

“This does not close out all of these lawsuits,” he said. While CalFire did not blame PG&E’s equipment for the Tubbs Fire, the company had been found responsible for 17 other blazes that year, he noted.

PG&E has stated repeatedly that it should not be held liable for the Tubbs Fire because it involved a private electrical facility. In November, Morgan Stanley analysts said in a note to clients that they were encouraged PG&E would not be held responsible for that fire.

Shares of PG&E rose nearly 75 percent to close at $13.95. After Reuters reported that the company still planned to file for Chapter 11, the shares fell 5.5 percent in extended trading.

PG&E shareholder BlueMountain Capital Management said in an emailed statement that the utility should not rush into a bankruptcy filing, which would be “totally unnecessary and bad for all stakeholders.”

But Moody’s Investors Service said bankruptcy was likely. “PG&E’s numerous regulatory, legislative, and credit challenges are largely unchanged and we still expect them to file for Chapter 11 bankruptcy protection in the next few days,” Jeff Cassella, vice president and senior credit officer, at Moody’s said in a statement.

“I don’t think this changes their cash position going forward and doing what they have to do maintain a safe grid,” he said by phone.