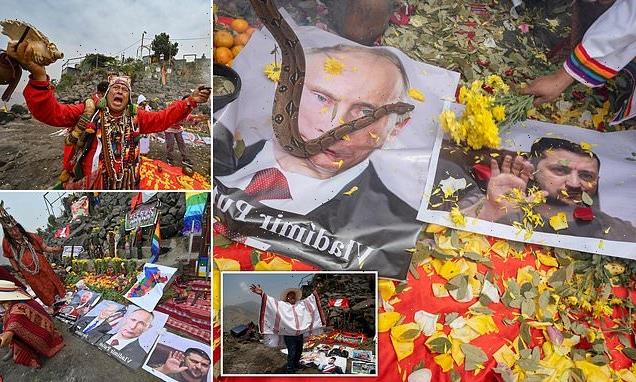 Peace on earth by August 2023? Peruvian shamans – who said Russia would never invade Ukraine – now predict the end of war as part of purification ceremony involving a snake crawling over photos of Putin and Zelensky

Peruvian shamans have ‘seen’ that peace between Ukraine and Russia will come by August this year – despite incorrectly predicting last year that Putin would not invade.

In a ceremony which involved a snake crawling over photos of Ukrainian President Volodymyr Zelensky and Russia’s Vladimir Putin, a group of shamans and healers in Peru’s capital Lima today foretold that the conflict would end by August next year.

Atop San Cristobal hill, the shamans, donning traditional Andean attire, welcomed the coming year in a purification ceremony incorporating flowers, incense, a live snake, and photos important political figures, as they made predictions for 2023.

The ceremony is performed every December as predictions are made on what the new year will bring – but last year shamans said that while Russia wanted to invade Ukraine ‘it will not happen’. 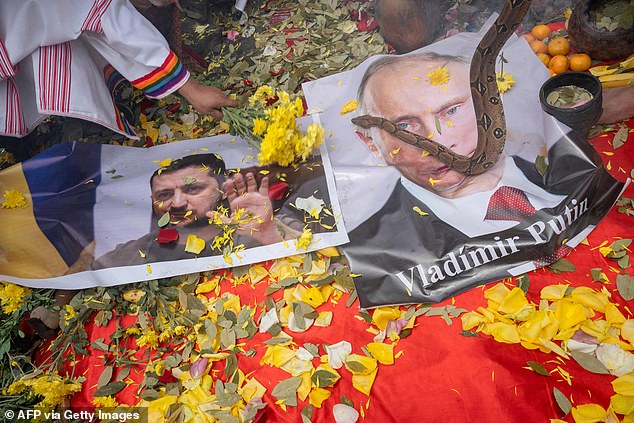 A group of shamans and healers in Peru’s capital Lima today foretold that the conflict between Ukraine and Russia would end by August next year, as they made their predictions for 2023 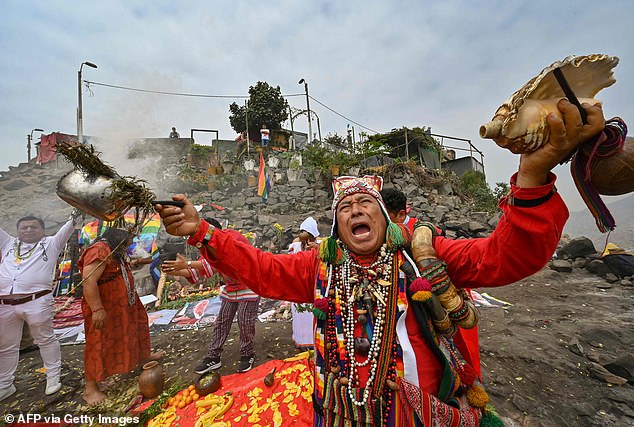 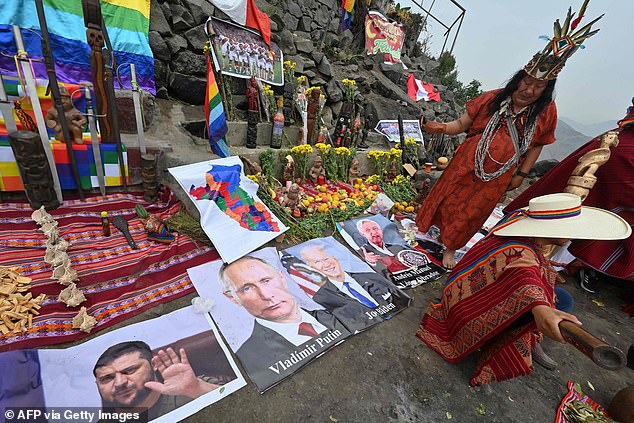 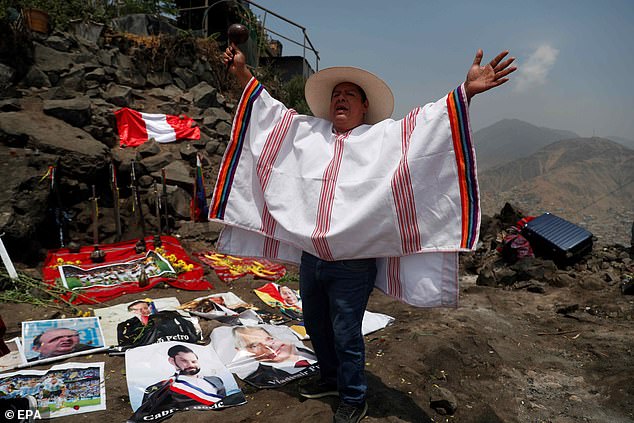 Shamans and healers perform a ritual to ask for peace and offer their predictions about 2023, on San Cristobal hill today

But still hoping for peace, shaman Cleofe Sedano said today: ‘All this will calm down. Peace, tranquility will come. That’s what we’ve seen.’

He has said that a peace treaty between Russia and Ukraine would be signed by August next year.

Last year, Peruvian shamans hoped that their rituals would ease border tensions between the two nations.

Shaman Félix Roldán said last December said that Russia ‘want to invade territory in Ukraine’ but added that ‘it will but it will not happen,’ according to Euronews.

‘That’s why us shamans are here so there is no war, no physical aggression,’ he said. 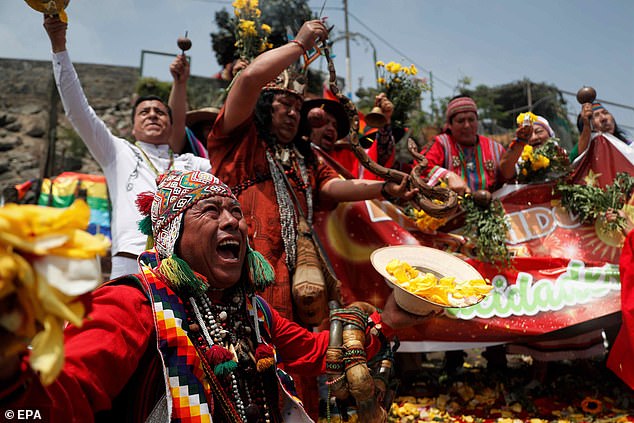 Shamans and healers performing their ceremony atop a hill today 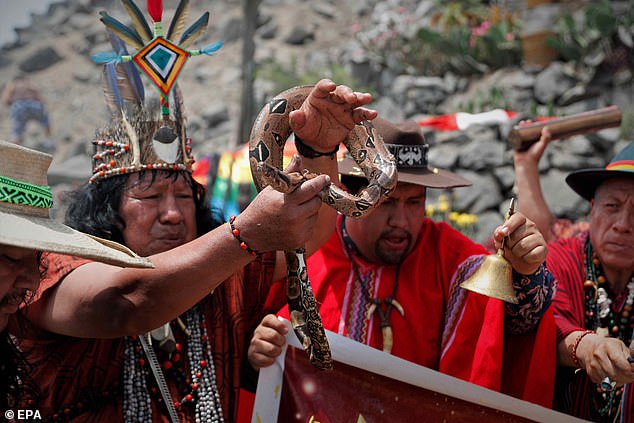 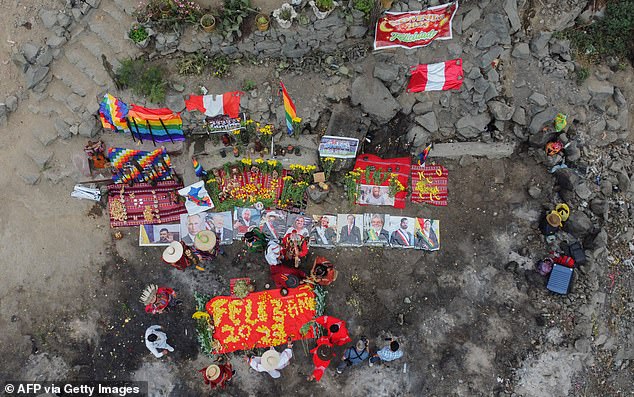 Aerial view of Peruvian shamans equipped with coca leaves, swords, smoking ceramic pots, incense and a live snake execute a ritual a top a hill over Lima, to deliver their predictions for the coming year 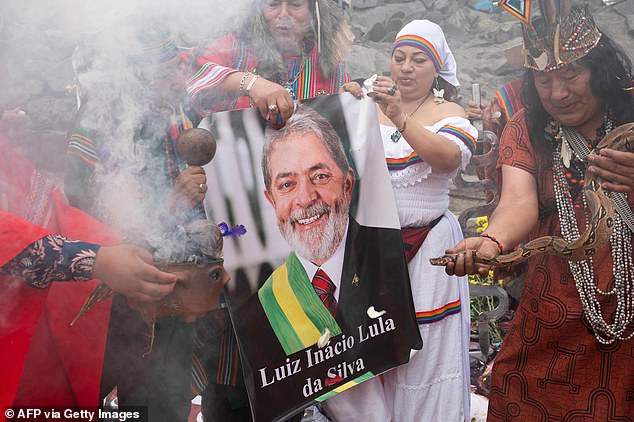 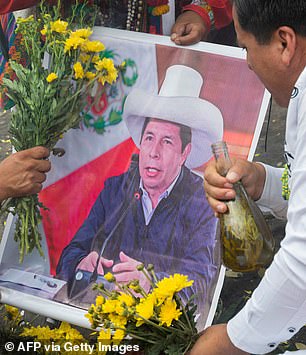 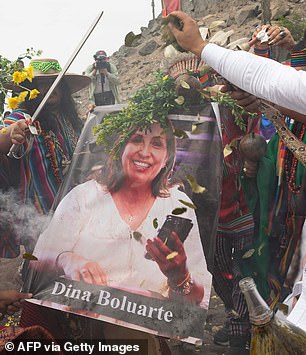 Issuing their omens after hovering over a sheet of flowers and coca leaves, with skulls on the ground, the shamans also predicted natural disasters in north America.

‘Next year there will be an earthquake, but not in the capital of Peru, in another place, mostly abroad in the northern part of America, which could be the United States… there will be a lot of tragedy, mostly climatic,’ said sorcerer and president of the International Organization of Shamans and Healers of Peru, Walter Alarcon.

He also said: ‘In Peru there is going to be a very big convulsion by 2023, which is a bit difficult to solve and there are many deaths.’