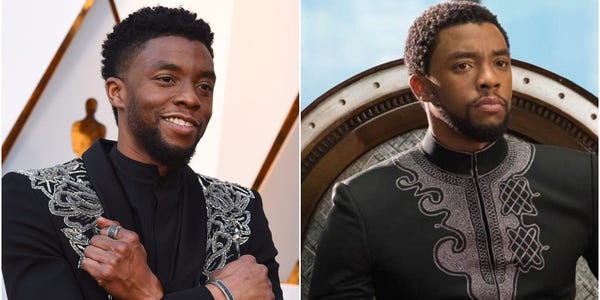 Boseman had been suffering from colon cancer. He was diagnosed with the disease four years ago, but never spoke publicly about it.

"In a year in which Black people are fighting for equality, dignity, and a better future … That Chadwick Boseman, the "Black Panther" has left us to go be with the ancestors." Washington Post columnist Karen Attiah said. "This is too much."

Boseman, who also appeared on the silver screen as the baseball great, Jackie Robinson, and the legendary singer James Brown, died at his Los Angeles home on Friday with his wife and family by his side, his publicist Nicki Fioravante told the Associated Press.

"He was such a bright light, such a gifted performer. He brought grace, elegance and power to everything he did. He always seemed to carry our ancestors with him. And now he joins them far too soon," musician John Legend said.

News of his death and his illness shocked some friends and fans who praised the actor for his genuine and caring personality.

"I'm heartsick to hear about Chadwick Boseman. Bruce and I send love to his family, friends, and fans," Massachusetts Sen. Elizabeth Warren wrote on Twitter.

"My friend and fellow Bison Chadwick Boseman was brilliant, kind, learned, and humble. He left too early but his life made a difference. Sending my sincere condolences to his family," Harris said.

Many were shocked that a man battling cancer, could gracefully portray a superhero without ever mentioning his illness.

"My god the ENTIRE TIME Chadwick Boseman was working in the MCU he carried this with him. Worked through it. Red carpets through it. Interviews through it. I can't imagine the weight of it in the public eye. What a god damn actor. What a man. This is too awful," Vulture writer Jordan Crucchiola said.

California Rep. Barabara Lee, called Boseman "a supremely talented actor who gave millions of Black children a superhero to look up to. He was taken far too soon, but his influence on our culture will never be forgotten. Rest in power."

In 2018, Boseman said he fought for T'challa ("Black Panther") to have an African accent in the film despite some hesitance from Marvel.

"They felt like it was maybe too much for an audience to take," Boseman said in an interview for The Hollywood Reporter's "Awards Chatter in 2018. "They felt like, 'Would people be able to understand it through a whole movie?' and 'If we do it now, we're stuck with it.' I felt the exact opposite — like, if I speak with a British accent, what's gonna happen when I go home?"

Boseman refused to either speak in his American accent or take on a British accent and said those options felt like a dealbreaker.

"I was like, 'No, this is such an important factor that if we lose this right now, what else are we gonna throw away for the sake of making people feel comfortable? … Once we decided to do it, we went for it," he said.

"From the 'Black Panther' to Jackie Robinson, he inspired generations and showed them they can be anything they want — even super heroes," Biden said.

Clips of Boseman flooded Twitter, including a 2018 clip from the Tonight Show where the actor interacts with "Black Panther" fans who express what the film meant for them.

"Thank you from the very bottom of my heart for all that you've done. For really being a hero that we really need in a time like this," one fan Darren said before Boseman surprised him.

Actor Mark Ruffalo said: "All I have to say is the tragedies amassing this year have only been made more profound by the loss of #ChadwickBoseman. What a man, and what an immense talent. Brother, you were one of the all time greats and your greatness was only beginning. Lord love ya. Rest in power, King."

Many were in awe of the actor's dedication to the representation of Black characters.

"Chadwick Boseman's filmography was defined by playing Black heroes. He played Jackie Robinson, James Brown and Thurgood Marshall, which showed the best of what Black men have done in art, sports and politics. Then by playing "Black Panther," he showed the best of Black imagination," Washington Post assistant editor Eric Michael Garcia wrote.