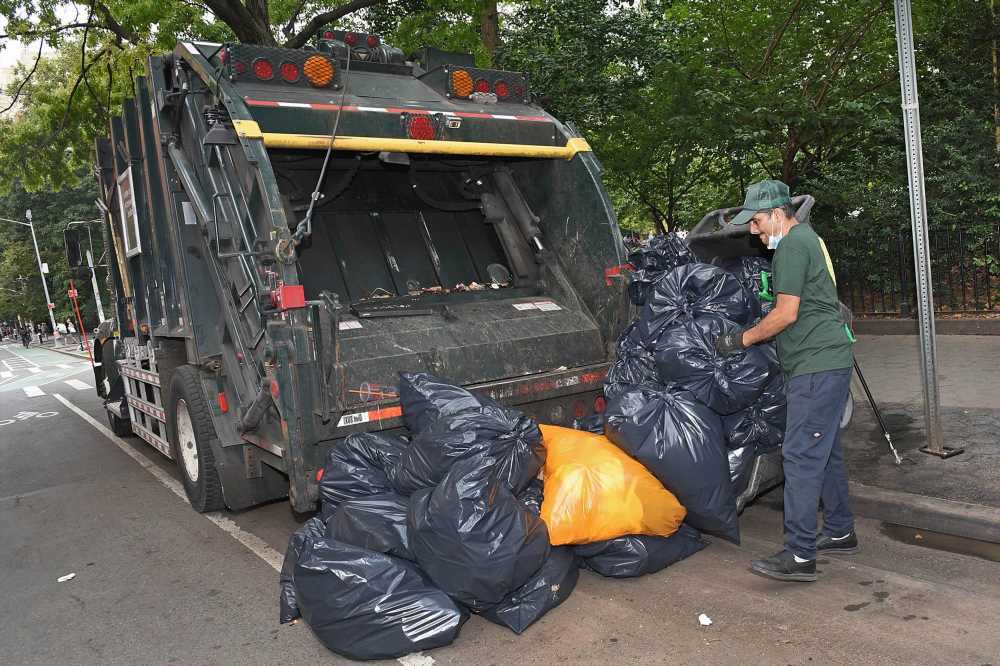 De Blasio disagrees with drinking in public, OK with dancing

The righteous NIMBYs: Besieged by disorder and failing pols

Something stinks at Washington Square Park and it’s not the stench of marijuana.

A Parks Department garbage truck sits parked nearly around-the-clock just outside the south end of the square, often with trash bags amassed around it.

“It reeks. It smells horrible. The back is open. There are flies,” one long-time local resident fumed. “The bags just pile up into the sidewalk. There’s no excuse for that.”

The woman said the trash bags block the path for walkers and joggers.

“Don’t even get me started about this garbage,” said another woman walking her dog along Washington Square South on Friday near the truck. “Tell Bill de Bla-Zero to get his damn act together.”

A resident of nearby Sullivan Street for 53 years said trash has been an issue inside the park too.

“The garbage gets bad there, especially on the weekends,” the woman said. “Everyone thinks it’s the Village and they can be free, but they wouldn’t do it at their house.”

Eddie Lew, a West Village resident since 1969, also said parkgoers could be disrespectful throwing trash on the ground.

“It’s annoying and if you tell them to stop, they just don’t care,” Lew said.

The park has been the focus of resident complaints for months with the northwest corner known as a “drug den” with open heroin and crack use. Hundreds pack in for out-of-control weekend parties with drug use, alcohol sales, amplified music and unlicensed boxing matches.

Some of the revelry has turned violent with Pride Parade celebrants clashing with cops in June and attacking food vendors.

The Parks Department said it had relaunched an anti-litter campaign in April. It said Washington Square Park was cleaned throughout the day with a morning crew arriving at 7 a.m. and an evening crew is onsite until 10:30 p.m.

But the department said the trash bags collected by the night crew are not loaded into the “packer truck” until the morning, before the vehicle leaves at 7 a.m.

“We empathize with passersby and will make a concerted effort to wash out the packer more frequently to minimize any odor,” a department spokeswoman said.