Pandemic pushes back retirement plans: One in eight older employees say they will wait longer to stop working after coronavirus hit pensions and jobs

One in eight older workers have ripped up their retirement plans because of the Covid-19 crisis, according to Britain’s leading economic think tank.

A report by the Institute for Fiscal Studies has highlighted the devastating impact the pandemic has had on the finances of households approaching retirement, as their pension funds have plunged in value.

But it has also revealed how the mass shift to working from home has caused many to rethink their future.

Almost a third of workers aged over 50 report that their financial situation has deteriorated as a result of the crisis, while almost a quarter of those whose income has fallen have less than £500 in emergency funds to fall back on. 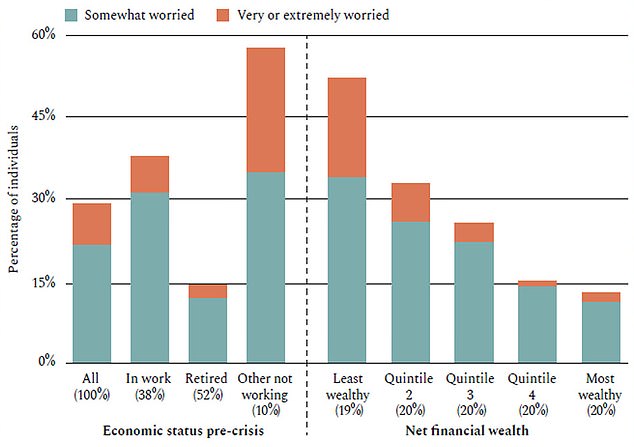 Many older people are extremely worries about their financial situation after the pandemic, this graph from the report from Britain’s leading think tank the Institute for Fiscal Studies found 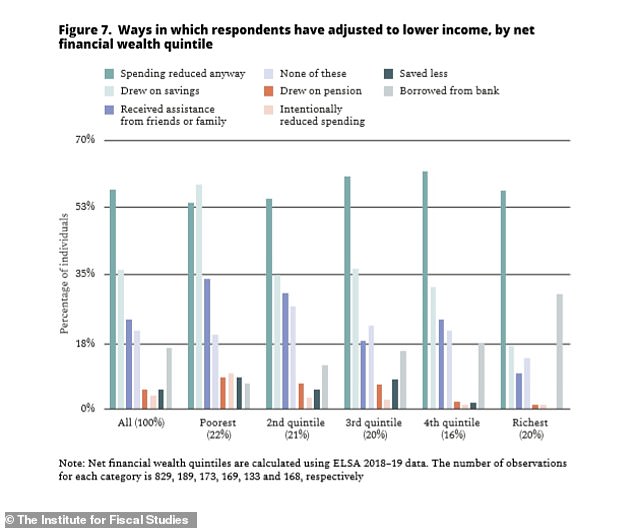 Almost a third of workers aged over 50 report that their financial situation has deteriorated as a result of the crisis, while almost a quarter of those whose income has fallen have less than £500 in emergency funds to fall back on, the IFS report found 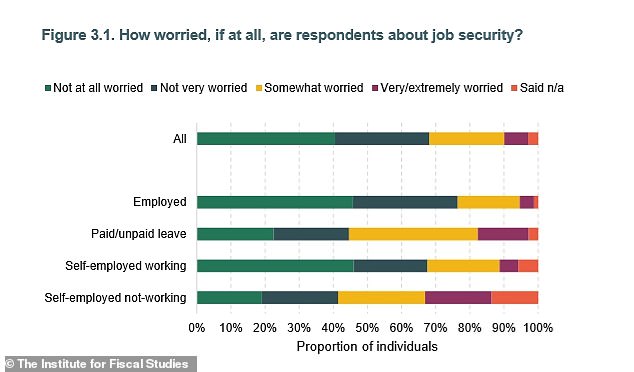 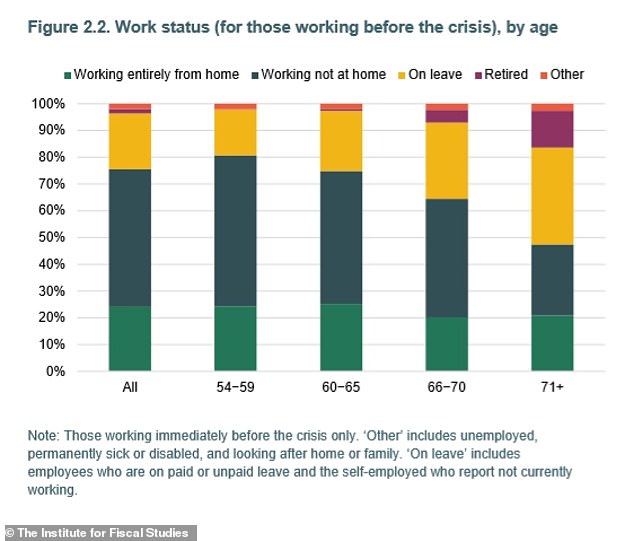 This graph shows the work status of the 6,000 people in their fifties and older surveyed for the IFS report

The result is that one in twelve (8 per cent) are now planning to retire later than they had originally planned, according to the report.

Although many are having to work for longer to allow their pension pot to recover, the IFS said others are choosing to do so because the shift to working from home during the pandemic makes ‘staying in work easier and more appealing’.

It comes amid Prime Minister Boris Johnson’s announcement of a £2billion scheme to help get younger people into work.

The employment scheme, dubbed ‘KickStart’, is aimed at creating hundreds of thousands of roles for young Britons who have been ‘left-behind’.

Employers will be able to offer work placements to benefit claimants with the state covering 100 per cent of the resulting minimum wage, national insurance and pension payments. 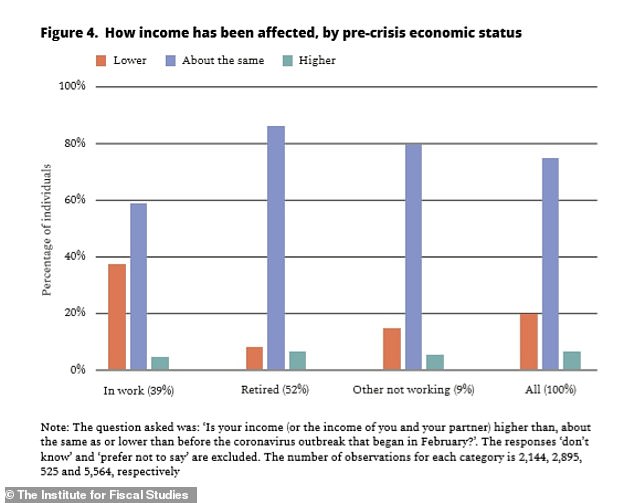 Many older workers have lost out on income as a result of the pandemic, this graph from the IFS shows 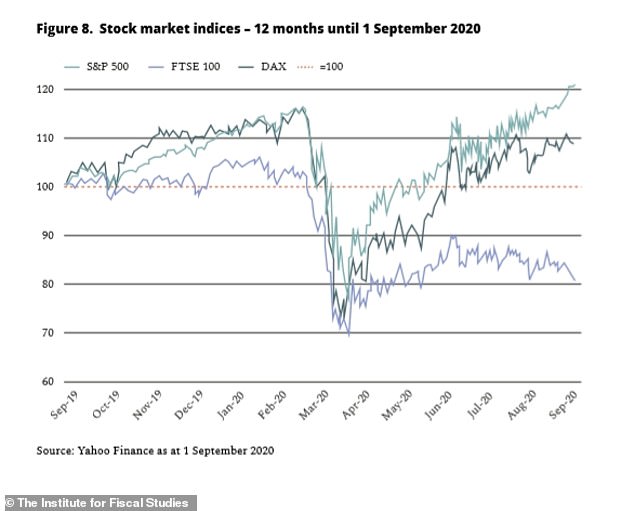 Although stock markets have bounced back, the key index is still down by almost a quarter since January – and worth more than £400billion less – leaving pension savers nursing heavy paper losses

The scheme will be delivered by the Department for Work and Pensions and will initially be open until December 2021.

Emily Andrews, Senior Evidence Manager at the Centre for Ageing Better, which co-funded the IFS survey with UK Research and Innovation, said the government needs to deliver similar targeted support to the elderly.

She said: ‘In addition to the kickstart scheme for younger workers, we need to see targeted support for over-50s to get back into work, retraining opportunities for over-50s, and a strong message from government that over-50s are just as entitled to jobs as younger workers.’

The IFS report also revealed one in twenty (5 per cent) of older workers are now planning to retire earlier than they had originally intended.

It said this was more common among wealthier households and those on furlough – who have given up hope of finding another job.

The findings were based on a survey of more than 6000 people in their fifties and older. 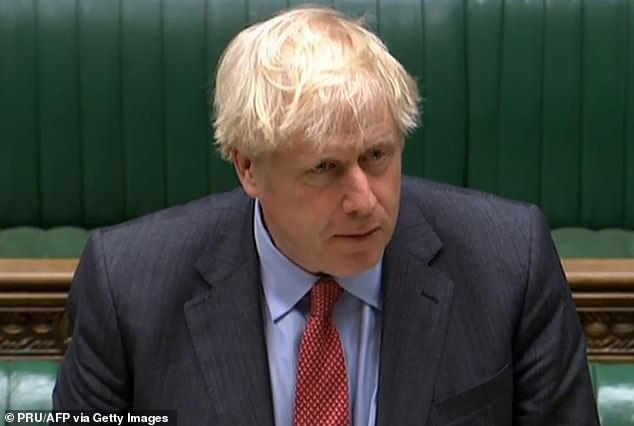 Prime Minister Boris Johnson (pictured) announced a £2billion scheme to help get younger people into work earlier this month. The IFS report has prompted calls for a targeted support system for older workers

Rowena Crawford, an associate director at the IFS, said: ‘The current pandemic risks having serious and long-term financial consequences for older workers, affecting living standards into and through retirement.

‘The crisis has also been disruptive to major life plans, with one in eight older workers so far changing the age at which they planned to retire.

‘Those on furlough are now more likely than those working to be planning to retire earlier and it will be important to monitor that this does not represent a rise in involuntary retirement among people discouraged from finding new work.

‘On a positive note, those working from home are now more likely to be planning to retire later; suggesting changes to work practices could benefit some older workers.’

The FTSE 100 index of Britain’s biggest companies – which most pension funds are heavily invested in- plunged by more than a third as the Covid-19 crisis earlier this year, wiping almost £670billion of its value.

Although stock markets have bounced back, the key index is still down by almost a quarter since January – and worth more than £400billion less – leaving pension savers nursing heavy paper losses.

While younger people have decades to wait for their pensions funds to recover, many older workers have been left with no choice but put their retirement plans on hold.

Interest rates on savings have also been cut to record lows during the coronavirus crisis. 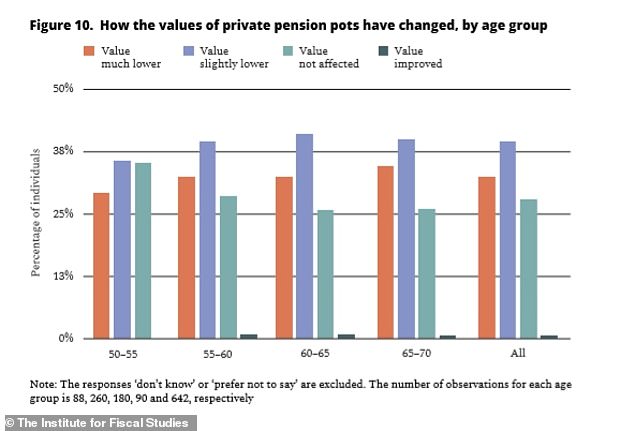 The value of pension pots, where many older people hold their wealth, has plummeted as the nation goes into economic downturn as a result of the pandemic 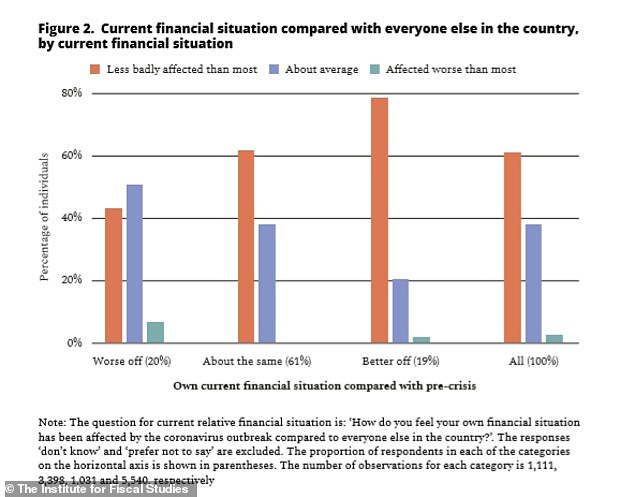 The result of their poorer financial situation, shown in the IFS graph above, is that one in twelve (8 per cent) are now planning to retire later than they had originally planned 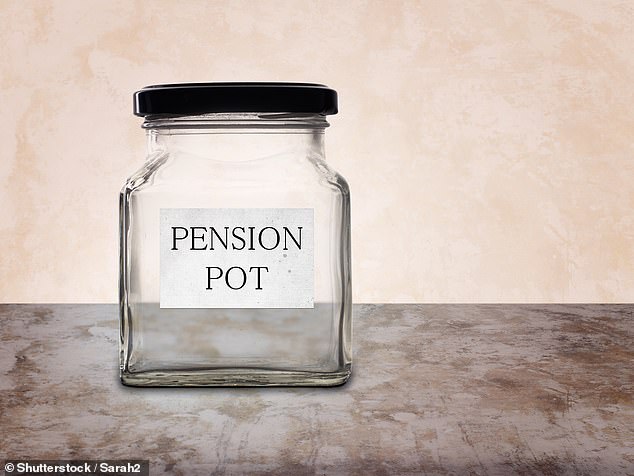 Interest rates on savings have also been cut to record lows during the coronavirus crisis, which affects older people saving for their pension

Separate released by the Bank of England Tuesday showed the average rate on a fixed term savings account has halved during the pandemic, from just above 1 per cent in February to a record low of 0.5 per cent.

Meanwhile the average rate on an easy access savings account – where you can instantly access your money without being penalised – has fallen by almost 70 per cent from 0.46 per cent to just 0.14 per cent over the same period.

Banks have cut returns for savers after the Bank of England slashed the official interest rate to a record low of 0.1 per cent to help boost the economy by encouraging households and businesses to spend their money.

Ms Andrews of the Centre for Ageing Better added: ‘The coronavirus crisis has disrupted many people’s working lives in ways we couldn’t have imagined just a few months ago.

‘There have been some silver linings – for example with more flexible working patterns allowing people to stay in work for longer.

‘But it’s deeply worrying to see many people now planning to retire earlier than they intended – including many who are currently on furlough.

‘That’s OK where it’s a positive choice, but for many it won’t be and will leave them poorer or in financial difficulty in later life.

‘We know that once out of work, over-50s struggle more than any other group to get back into employment, and we must not let a generation of older workers write themselves off prematurely.’

Caroline Abrahams, Charity Director at Age UK, agreed that the pandemic is presenting many older workers with a challenging and uncertain future.

She said: ‘Unless measures are brought in to help them to keep their jobs and to support those who unfortunately lose them, it seems certain that hundreds of thousands will soon be staring prolonged unemployment and premature retirement in the face.

‘We know that once an older worker loses their job they typically find it really difficult to secure another one.

‘And that’s in the best of times: at the moment vacancies are in short supply too so this threatens to create a perfect storm for many men and women aged 50 plus, especially if they work in sectors badly affected by the pandemic such as retail and hospitality.

‘For substantial numbers, this may not only spell the end of their working lives, but throw their retirement plans into total disarray and undermine their future financial security.

‘It’s really urgent that the Government prioritises this group or we could see an entire generation facing a poorer retirement, which is in no one’s interests.’