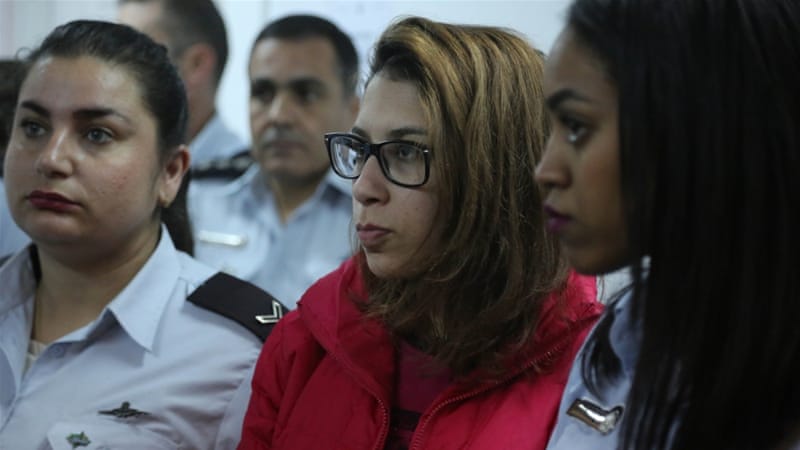 Nour Tamimi, a 20-year-old Palestinian charged with assaulting an Israeli soldier after the release of a viral video of the incident last month, has been released on bail.

The video of the December 15 confrontation outside the Tamimi’s home in the village of Nabi Saleh was widely shared on social media. A few days later, the two cousins, along with Ahed’s mother, were arrested by Israeli forces.

On Friday, Nour’s father, Najm Tamimi, told AFP news agency that an Israeli military court had rejected the prosecution’s appeal against his daughter’s release, allowing her to return home after posting a bail of 5,000 shekels ($1,450),

The 21-year-old, who studies journalism at Al Quds University, will have to sign in at an Israeli police station every Friday at noon.

She was charged on Sunday with aggravated assault and disturbing soldiers from carrying out their duties.

Court proceedings against her are set to begin on February 12.

Ahed Tamimi, meanwhile, remains in custody along with her mother, Nariman.

According to their lawyer, Ahed and Nariman’s charges include older incidents unrelated to the video.

The video went viral and spurred an Israeli social-media campaign demanding the arrest of Ahed, a member of a family of well-known activists in Nabi Saleh.

Nour also appeared in the video. Following the arrests, Israeli authorities summoned Bassem for interrogations and questioned him for two hours about the video.

According to Ahed’s father, Bassem Tamimi, the teen and Nour were attempting to push the soldiers away from their home in the video after their 15-year-old cousin Mohammad was struck point-blank in the face with a rubber bullet, which left him in a coma for 72 hours.

Bassem also said that the video was shot immediately after Israeli forces fired tear-gas canisters directly at their home.

He said the girls were trying to protect their family.

“Ahed was telling the soldiers to get away from our home,” he told Al Jazeera at the time of the arrest.

“She was trying to force them to leave to prevent the soldiers from hurting anyone else.”

A hearing is scheduled for January 8.