London: London's celebrated food scene is being strangled by tightening coronavirus restrictions, with Australian chefs and entrepreneurs grappling with ways to adapt and stay open over winter.

They have also vowed to oppose any push for staff to police customers who flout the rules, arguing it would be an affront to the ethos of hospitality and is not their job. 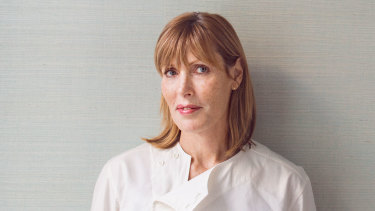 Hospitality groups warned the rules were difficult to police and would trigger bankruptcies and mass job cuts in London. They also argued the government has offered little evidence that eating out is a major source of community transmission.

"We need to do our due diligence and make sure our restaurants are safe for people to be in and we believe we've done that," she says.

"I certainly wouldn't feel comfortable challenging people about whether they live together or not and I don't see that as our role. It's probably the least hospitable thing you could do by starting to challenge someone when they come in the door." 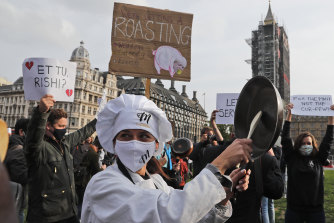 Hospitality workers protest at Parliament square, London, to urge the government to do more to help the industry.Credit:AP

Australian chef Brett Graham has closed his famed Notting Hill restaurant The Ledbury indefinitely because of the difficulties of social distancing.

London restaurant owners reported an instant drop in reservations when the latest set of restrictions were introduced on October 16 — just months after most reopened from the first lockdown.

"I've gone really up and down," Gyngell says. "If I'm being really honest, I was literally a rabbit in the headlights when I heard the news [about the first lockdown] and having worked a certain way for a really long time I have been kind of stuck in my ways and inflexible … and actually this has really forced me to be open-minded."

One rare positive has been staff collaboration and innovation, she says. "It's been painful and agonising and also kind of amazing as well."

JP Then, a University of Queensland graduate who co-founded the popular Crosstown bakery chain in London, also praised his team's willingness to adapt.

"I feel that we're almost getting more out of our team than we ever have, in many senses," he says. "People really care about this business and this brand that we have created and are really working their asses off to make sure we stay afloat and active."

Then has a different problem to restaurateurs: footfall has plummeted in London's office districts as professionals stick to working from home.

"We are very box-led, people buying a 12-pack or six-pack for the office and we just don't see that any more because there aren't many people to share it with unless you want to sit down and eat 12 donuts yourself.

"In Canary Wharf or the City of London, where there [are] these skyscrapers, the occupancy rates in some of them is 10 per cent or 15 per cent if not below that. That's a big structural change that will impact our business for the long-term." 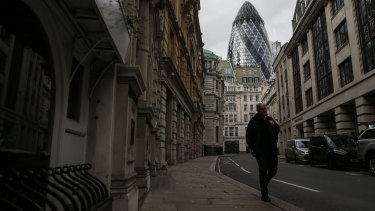 Ammermann says the pandemic had exposed the problem of London's high rents and rates. He deals with six different landlords and the experiences vary wildly: one offered to suspend rent for nine months this year but his business is having "very uncomfortable conversations" with others.

Chancellor Rishi Sunak announced a package of new measures shortly after the trio spoke, including direct cash grants of up to £2100 ($3860) per month for businesses affected by tier-two restrictions. The government will also increase its wage subsidy for affected workers.

Britain recorded 21,242 new COVID-19 infections on Thursday and a further 189 deaths. Some 1054 Britons have died of the disease in the past week.

Get our Coronavirus Update newsletter for the day’s crucial developments and the numbers you need to know. Sign up to The Sydney Morning Herald’s newsletter here and The Age’s here.