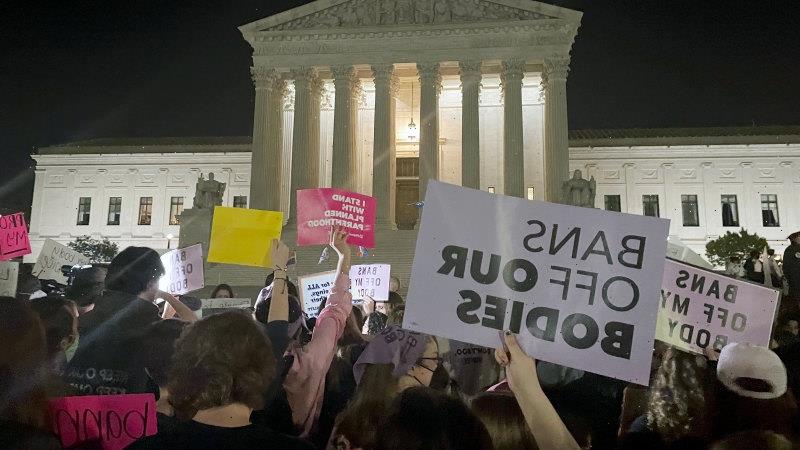 Last September, US Supreme Court judge Amy Coney Barrett, the final of three conservatives appointed to the court by former president Donald Trump, declared at a function in Texas, “My goal today is to convince you that this court is not composed of a bunch of partisan hacks.” It was a tough ask, and one that became all-but impossible to argue this week when it was revealed via a leaked draft ruling that America’s highest court is expected to overturn a nearly 50-year-old precedent by extinguishing the fundamental right of women to have an abortion in the US.

The reality is that from the moment Barrett, a pro-life advocate before joining the court in 2020, replaced Ruth Bader Ginsburg, a fierce defender of abortion rights, the power of the court moved decisively into the hands of a conservative super-majority, making it only a matter of time before the landmark abortion case Roe v Wade was overturned. 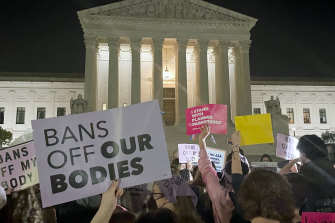 A crowd gathers outside the Supreme Court in Washington after the draft decision was published.Credit:AP

While the draft ruling is just that, a draft, there is little doubt that the thrust of the argument will be largely echoed in the final decision. Justice Samuel Alito, who wrote the leaked document, believes: “Roe was egregiously wrong from the start. Its reasoning was exceptionally weak, and the decision has had damaging consequences. And far from bringing about a national settlement of the abortion issue, Roe and Casey [which in 1992 also backed the right to an abortion] have inflamed debate and deepened division.”

Alito is right in one sense. Since the 1980s, in reaction to progressive victories in the Supreme Court in the 1960s and ’70s, religious and legal conservative groups, in lockstep with the Republican Party, have turned the pursuit of a pro-life agenda into an all-out battle. But that deep rift has barely been reflected in the broader community. Since Roe v Wade was decided, polling has shown that fewer than 20 per cent of Americans have supported abortion being made illegal in all circumstances.

If, as seems likely, the Supreme Court quashes Roe v Wade, it will hand control of setting laws relating to abortion to the states. About half appear ready to either ban or severely limit access to the procedure. And any thought that this would reduce the division or debate over the issue is risible. Far from settling the matter, this is more likely to even further “inflame debate and deepen division”.

Troublingly, this is just one of several high-profile issues before the Supreme Court that could radically change the rights of Americans. Cases involving affirmative action in university admissions, gun rights and the separation of church and state are all to be decided in the near future. In each instance, the court’s conservative majority is believed to be leaning towards overturning long-held rights in favour of its political leanings.

America is fundamentally different to Australia: its Constitution’s Bill of Rights provides the Supreme Court with the platform to have a far more influential role than our High Court does, and the US court has played an active and determining role on issues of race, gender, religion, free speech and the justice system.

In most part, though, it has been cautious in deciding on a radical shift in the law – and has been particularly reluctant to overturn a decision of an earlier Supreme Court – without reflecting the changing views and attitudes of the broader community. The overturning of Roe v Wade would be no such thing. In fact, it would go strongly against the community view. It would further damage American society, its cohesion, its humanity and the credibility of its laws. In short, it would be disastrous. And it would send the strongest possible signal that, indeed, the court has been taken over by “partisan hacks”.

Gay Alcorn sends a newsletter to subscribers each week. Sign up to receive her Note from the Editor.