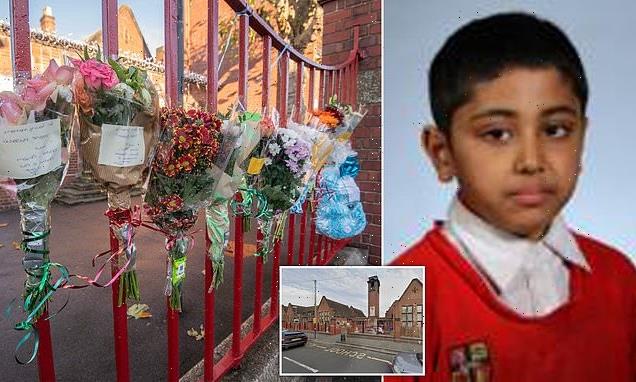 Oversized trainers may have killed schoolboy, 10, who died after falling and banging his head during playground football game, inquest hears 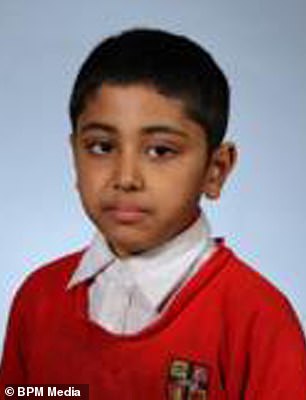 Aston Villa fan Yasir Hussain, 10, died five days after banging his head against a wall during a game of football at school

A schoolboy who died after falling and banging his head while playing football was wearing oversized trainers which ‘may have been a factor’ in the tragedy, an inquest heard.

Aston Villa fan Yasir Hussain, 10, who dreamt of becoming a professional footballer, had been playing in goal and hit his head while jumping.

First aiders at Leigh Primary School in Birmingham dialled 999 for an ambulance, but it failed to turn up and the ‘improving’ youngster was taken home by his mother.

Fellow pupils told West Midlands Police that Yasir, from Ward End, was playing goalkeeper when he went to ‘save a ball and hit his head on a wall.’

He was assessed by school first aiders after a raised bump appeared on the right side of his head during a lunchtime break. A 999 call was made by deputy headteacher Samara Azam and an ambulance was initially dispatched to the school.

After 90-minutes no paramedics had arrived and the same member of staff made a second 999 call after his condition ‘improved’ when he began to communicate more, the hearing was told.

The call handler for West Midlands Ambulance Service apologised to the teacher as the service was ‘extremely busy’ with a surge in calls that day due to the pandemic. Both 999 calls were played during proceedings.

She sought advice from her supervisor and a paramedic before cancelling the ambulance after Yasir’s mum Nazia Parveen said she would take her son home.

But his mum said had she received a fuller picture of his condition, she ‘would have made a different decision.’ 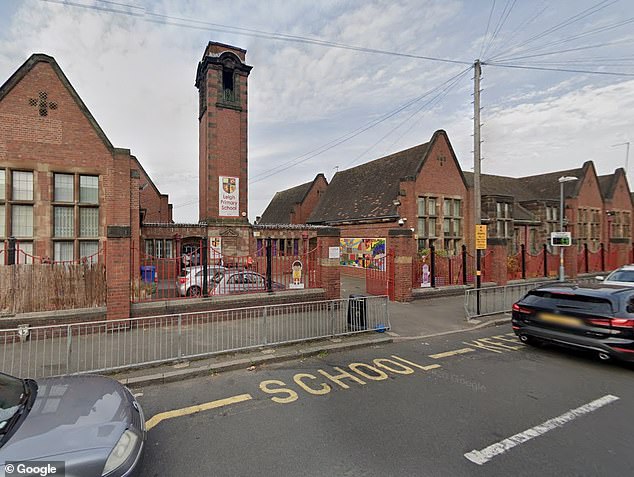 First aiders at Leigh Primary School in Birmingham dialled 999 for an ambulance, but it failed to turn up and the ‘improving’ youngster was taken home by his mother

Advice was given to the teacher to pass onto his family that if Yasir was to develop new symptoms to phone back 999. His condition did deteriorate at home the same day on November 12 and he died five days later at Birmingham Children’s Hospital.

First aider Zahira Mabine, who was stationed in the playground at the time of the incident, said Yasir’s large trainers ‘could have been one of the factors’ which led him to fall.

According to Ms Mabine, Yasir had been bought the shoes because he had asked for them, but it was unclear why they were so big.

‘I was cleaning Yasir’s legs as they were quite muddy I noticed his trainers were too big for him,’ she told the inquest.

‘I was able to get three fingers between his heel and the back of his trainer.’

She told his mum and grandmother who had arrived at the school after they were notified of his fall.

‘I mentioned this to both of them. I was told those trainers were the ones that he wanted and that’s why they got them for him,’ she said.

‘I said it’s really important he has the correct shoe size because they could cause him to have a fall.’

She believed ‘it could have been one of the factors’ which led him to fall, the hearing was told.

Describing Yasir’s appearance after assessing him, Ms Mabine said: ‘Initially, when I saw him he looked quite pale – his face and lips looked pale. I got him to sit on a first aid chair.

‘I asked him where it hurt and replied – “My head hurts”. I noticed his right eye was closed too. 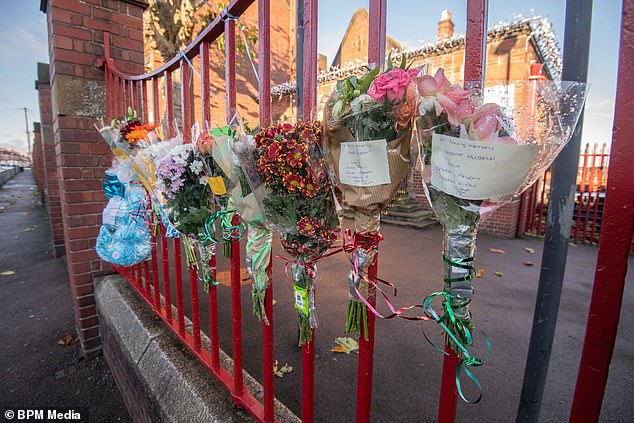 He died five days later in November last year. His mother has said that had she received a fuller picture of his condition, she ‘would have made a different decision’

‘I started examining his head and that’s when I noticed just above the right side of his ear there was a considerable sized bump which was raised and it was grazed on the bump as well.

‘It was like (the size) of a one pence piece. It was raised and visibly noticeable. He was closing his right eye and wanted to put his head back and was saying ‘I want to go to sleep’.

She added: ‘It was the fact that he wanted to go to sleep and kept wanting to put his head back and close his eyes.

‘He kept saying his head was hurting, so he didn’t want to answer many questions rather than him being unable to.’

Another first aider Susan Alder said: ‘We both decided an ambulance was needed to be called purely as he wanted to go to sleep and looked pale.’

Lunchtime supervisor Rizwana Khursheed said: ‘I was standing by the door to the toilets, the kids were playing football and they came to me and they said Yasir was on the floor.’

The inquest was shown playground CCTV from 12.41pm – but footage did not capture the moment he fell. Louise Hunt, the Senior Coroner for Birmingham and Solihull, said Yasir was on his feet and then seconds later on the floor.

The camera scans from one side of playground to other – but the recording is ‘disjointed,’ she told the hearing.

‘He (Yasir) did try and say something, but I couldn’t understand what he was saying,’ said Ms Khursheed.

‘They (other kids) were all shouting and talking. I couldn’t hear him (Yasir) properly. It was quite loud. There was too much going on.

‘I was there – but I didn’t understand (what he was saying). There was too much noise.’

Ms Khursheed said she did not hear him say anything coherently.

‘I tried to help him up. I held his hand. He wasn’t feeling very well. I saw his face. I thought he couldn’t walk. I thought he was hurt,’ she said.

‘He wasn’t standing up properly. I told him to sit down and he just sat down on the floor.’

He later started to talk in sentences and asked to go home 90 minutes later.

Deputy headteacher Ms Azam added: ‘At that point it made me a bit more reassured that actually he wasn’t as hurt as I initially thought, that he was communicating with me and he was getting better, not worse.’

She added tearfully: ‘I told mum that if she had any concerns she could pick up a phone and ring for an ambulance or take him to A&E. I asked mum twice if she knew what I meant and she said that she did. That was the last time I saw Yasir.’

‘He used to support Aston Villa. He wanted to be a footballer. Football was his favourite thing,’ she said.

‘He liked it there (at school). He has a good set of friends. I liked that school.’

She said the school phoned her about the incident and told her to ‘quickly made your way to school.’

She said his head was hurting and he was given some paracetamol. She was told to take him to hospital if he got any worse and she stayed with him the whole time.

Five-and-a-half hours later at home he ‘very suddenly got worse’, she said.

Medical evidence will be heard at the inquest tomorrow, Tuesday, April 13, when the hearing continues.