A developer expects police to be called if an Indigenous group tries to block a geological scrape of a NSW south coast site upon which he wants to build a retail and accommodation complex.

Excavations are due to be carried out soon on the grounds of a former church in Huskisson in the hope of ending a long-running battle over whether the site is an Indigenous burial ground. 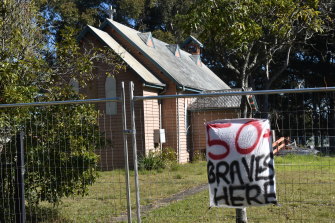 The site of the controversial development in Huskisson.Credit:Coen Ayres

An unreleased independent heritage inquiry into the land has found with “high confidence” the site could be home to more than 50 graves.

Shoalhaven City Council, in the hope of solving the mystery, voted to carry out low-impact ground excavation at the site which has angered the Indigenous community who believe this could desecrate, what they believe, is their ancestors’ bodies.

Aunty Lauren Chapman Carpenter, whose grand aunt Mary Carpenter was married to the ‘King of Jervis Bay’ James Golding (rumoured to be buried on the site) said she was willing to set up camp to protect the area.

“The scraping would be like radiation going through the land and it’d disturb our ancestors,” Ms Carpenter said. “It’ll be over my dead body that they’ll build something here”. 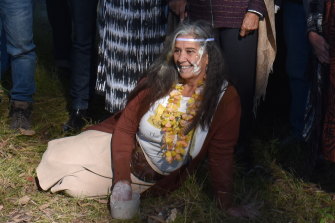 Aunty Lauren Chapman Carpenter at the smoking and healing ceremony at Huskisson.Credit:Coen Ayres

The developer, Stephen Bartlett, who plans to turn the land into a mixed business zone, said the council was in charge of the heritage report that would determine whether there were bodies beneath the church.

“From our point of view it is not life or death, we will follow the process and follow the path,” Mr Bartlett said. “They can carry on all they want. The police are going to bring in a tactical response and move them on.” 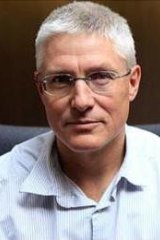 “If someone else had bought it, there were going to be six apartment buildings there and no jobs,” he said. “We bought it to put food, beverage and accommodation businesses to create jobs.”

At a smoking and healing ceremony last week in the seaside town, traditional owners of the land, including Ms Carpenter, honoured what they believe is upwards of 50 Indigenous ancestors buried beneath the Jerrinja and former Huskisson Anglican Church land.

“I just want all our ancestors to be at peace,” Ms Carpenter said. “They disturbed us when we were alive and moved us on, why move us on when we’re already gone?”

The council voted 7-5 in favour of the excavation. Shoalhaven mayor Amanda Findley, who voted against it, described the excavation proposal as “desecration” and “discriminatory”.