The Porsche driver who filmed the aftermath of the Eastern Freeway crash that killed four police officers allegedly attached graphic photos of their dying moments to an online financial complaint after an insurance company rejected his $2.2 million claim over the tragedy.

A police officer told Sunshine Magistrates’ Court on Tuesday she felt “angry and outraged” after seeing an online post containing an image of the aftermath of the Kew crash that killed four colleagues on April 22, 2020. Another witness said he felt repulsed and sickened when he saw similar photos. 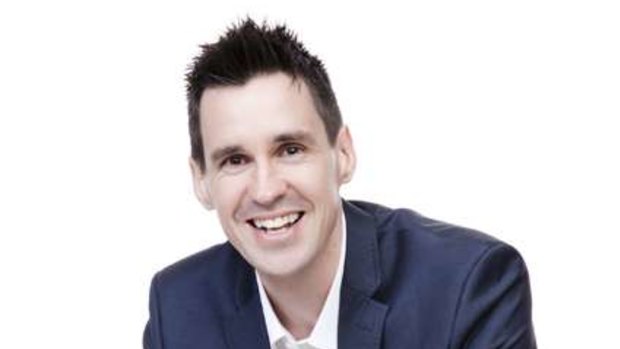 Richard Pusey has pleaded not guilty to four charges.

Richard Pusey has previously been jailed for outraging public decency for filming the dying officers in the moments after they were hit by a truck. They had pulled Pusey over for speeding in his black Porsche.

Leading Senior Constable Lynette Taylor, Senior Constable Kevin King and constables Glen Humphris and Josh Prestney were killed when Mohinder Singh’s truck veered into the emergency lane and hit them, while Pusey was at the side of the road. Singh was jailed for 22 years.

Prosecutors now allege Pusey included photographs with an online complaint he lodged with the Australian Financial Complaints Authority on November 25 last year, and with a Google review he allegedly posted about Porsche Centre Melbourne on February 7.

Pusey, 44, has pleaded not guilty to two charges of using a carriage service to cause offence and two of offending while on bail. He sat in the dock behind glass on Tuesday, flanked by two custody officers, and represented himself on the first day of his contested hearing. 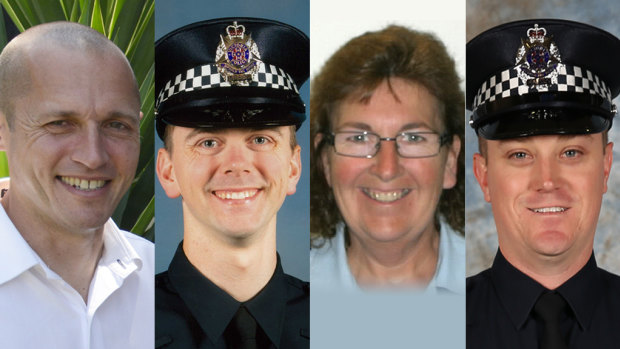 Prosecutor Anthony Albore told magistrate Michelle Mykytowycz that Pusey sought $2.2 million from insurers for his damaged Porsche, but his claim was rejected in March last year.

Harry Ganavas, a senior manager at the authority, said the complaint – lodged in Pusey’s name and using his email address – included the words: “A truck mowed down four hero road safety officers … it broke a black Porsche and now these c—s won’t pay out.”

Another passage included descriptions of the officers’ injuries, Ganavas said. 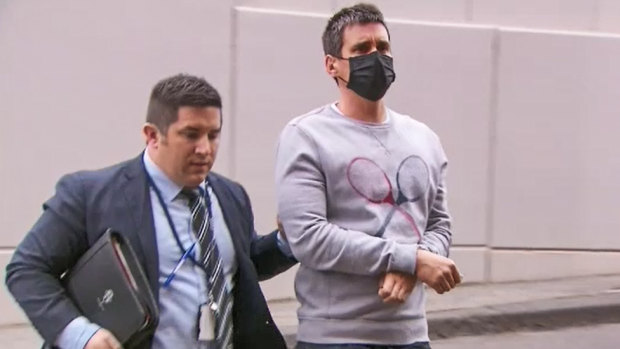 Richard Pusey (right) is arrested in 2020 for filming the dying police officers.Credit:Nine News

“At the time I viewed the images, I felt repulsed and physically ill at the graphic content of those images,” Ganavas told the court.

Asked how he felt when he read the accompanying words, he said: “Full of revulsion that someone would describe those matters in that way.”

Ganavas said the authority told Pusey it wouldn’t investigate his complaint because of his “egregious conduct”.

Sergeant Laureina Everett said she took screenshots of the review of the Porsche dealership when alerted to it by a member of the public. The review included “quite graphic” images of the dying officers, Everett told the court, and a written complaint about car warranties.

Asked how she felt at seeing the photos, Everett said: “Angry and outraged.”

The magistrate granted Pusey permission to see the photographs being discussed, and a police officer held a laptop to the glass of the dock. Pusey studied the images and took notes as the custody officers turned away so they didn’t see the photos.

Pusey had faced stalking and assault charges when he allegedly made the online posts, but they were later withdrawn.

Pusey remains in custody and his contested hearing will continue on Wednesday.