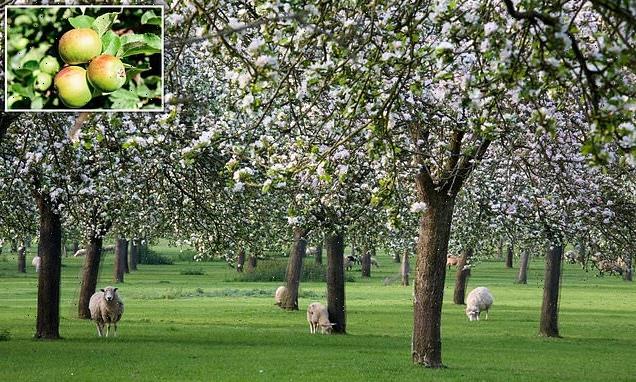 An orchard in spring, bursting with blossom, is a British Garden of Eden. So can’t we STOP chopping them down? Lifelong farmer JOHN LEWIS-STEMPEL’s lament as the National Trust says nearly two-thirds of England and Wales’ orchards have disappeared

When I was a child my grandfather took me to see his Gloucester Old Spot pigs. ‘Those black circles on sows’ backs’, he said, ‘are where the falling apples bruise ’em.’

Such was the West Country fable of how the pinky Gloucester Old Spot got its markings.

We were standing in the farm’s orchard, with its giant gnarled trees, pigs scoffing on the windfalls, geese plucking the grass and the tart perfume of apples heavy on the autumn air.

Last week, the National Trust reported that 58 per cent of the orchards of England and Wales, including pear, cherry and damson, have ‘disappeared’. Bad enough.

But peel away the figures and the reality is worse. More than 81 per cent of traditional orchards, such as my grandfather’s, have gone. Been ‘lost’.

Some vanished under roads, others under houses, and are recalled today only in a ghost-name: Orchard Place, Pear Tree Avenue, Cherry Tree Way. 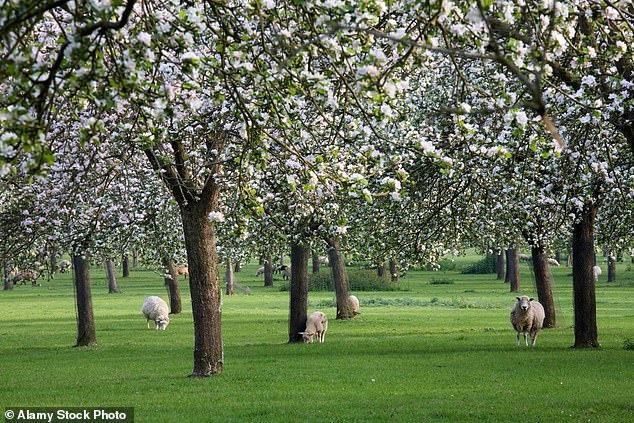 Last week, the National Trust reported that 58 per cent of the orchards of England and Wales, including pear, cherry and damson, have ‘disappeared’

But too many orchards got grubbed-up by farmers themselves. When old-style family farming went into the sunset, so did the old-style orchard.

Until the 1950s the farm orchard provided fruit for the family but also, quite likely, cider for the workers.

‘Scrumpy’, as we in Herefordshire call the amber nectar of alcoholised apple juice, was part of the workers’ wages, two quarts a day per man, quenching their thirst at harvest.

I quaffed the stuff myself as a teenager circa 1980, the glug on the lunchtime brown bottle offered by farmworker Frank as piquant in my mind as the accompanying first drag on a Players’ No 6 – the other necessity of break-time on that era’s family farm.

In a virtuous triangle, the livestock received fodder from the fallen fruit while manuring the trees and providing natural pest control.

Plucking the reddest apples in our family orchard required a child to climb the trees like a squirrel. Yours truly picked the apples into a handy Royal Mail canvas satchel, charmed off the postman’s shoulder by my father. 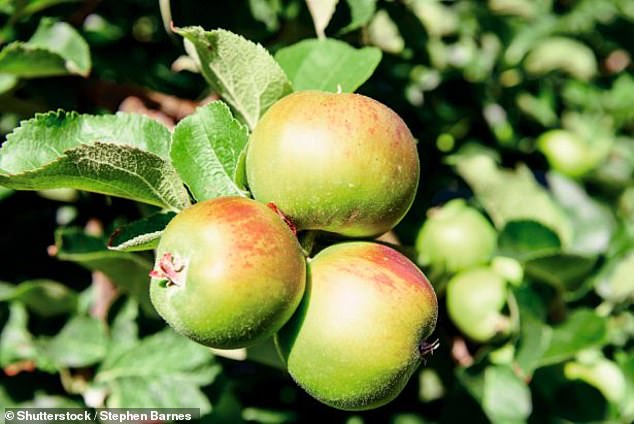 Too many orchards got grubbed-up by farmers themselves. When old-style family farming went into the sunset, so did the old-style orchard

The other apples were shaken down, to be gathered up by a small army of family, friends, and villagers.

Anything missed or pappy was left for the Gloucester Old Spots, the quintessential orchard swine.

I do not think it just a rosy trick of memory to recall those dewy September mornings of fruit-picking as a sort of paradise.

The orchard was introduced to Britain by the Romans, the importers of the cultivated apple.

This island nation has since developed a world-record breaking 2,300 varieties of apple.

In spring, when the blossom was bursting white and pink, the same farm orchard was an enchanted garden.

The Japanese have a celebration, hanami, to mark the flowering of the cherry. A Herefordshire fruit orchard in full flower is no less worthy of veneration. It matters that people are able to enjoy orchard blossom; it is a signal that spring has come.

In all four seasons, the traditional orchard, be it for apples or pears, cherries or damsons, was a haven for wildlife.

There were the trees themselves, abodes for everything from long-eared owls to long-eared bats.

The trees’ flowers were for the nectar-needing butterfly, the slugs on the windfalls a feast for badgers. In bleak winter, the little treecreeper always found a morsel in the bark of the Worcester Pearmain.

The livestock that grazed and gorged under the trees’ spreading branches produced poo galore; a single Hereford cow emits sufficient effluent to feed two million insects per annum, which explains why swallows swirled above that orchard of my grandfather’s.

Little, if any pesticide, was used. Compare this with the modern growing of fruit in an intensive system of dwarfed trees, closely packed, with chemicals systematically applied.

Apples are among the most sprayed fruits in the UK and Europe. A study published in February by a French government agency determined that the average number of sprays per apple crop was 35.9.

Some of these chemicals are of concern to human health. Certainly they are doing little for the bees and other pollinators on which agriculture depends.

If the old orchards were so plum-perfect, why, you wonder, did farmers get rid of them? Certainly, the pruning and picking were labour intensive, but the real problem was that the orchard ceased to have utility.

No one made cider for their workers and it became easier to buy a jar of glace cherries from Sainsbury’s than pick and sugar them oneself.

The orchard became awkwardly non-useful. Wheat could not be grown under the trees’ shade, neither could grass for cows – now kept in sheds– be easily cut with a mower 10 metres wide. The trees got in the way of ‘progress’.

Consequently, the farm orchard was chopped down. When it went so did knowledge of the folk songs and customs of orchardland, such as wassailing, the blessing of the trees on Twelfth Night. 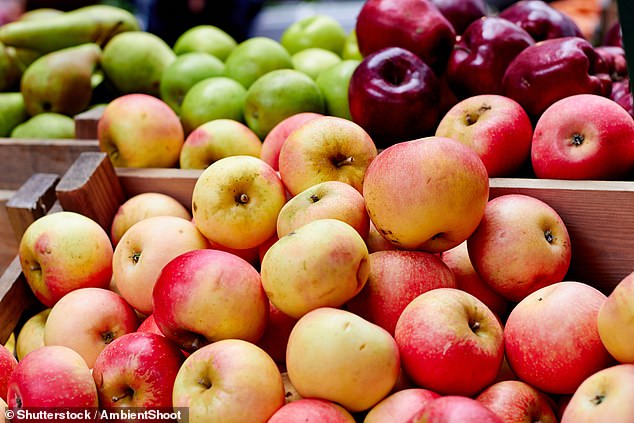 Apples are among the most sprayed fruits in the UK and Europe. A study published in February by a French government agency determined that the average number of sprays per apple crop was 35.9. (File image)

Lost too were traditional apple varieties; the shopper’s choice was reduced to imported Braeburn, Gala, Granny Smith and the errantly named Golden Delicious.

As some of us down on the farm have realised, getting rid of the old orchard was a rotten decision.

If its trees produced apples with lumps and bumps, these skin-deep flaws were more than offset by an agricultural system that fed Shaun the Sheep, Goosey Gander and Little Red Hen for free.

In the old orchard, the birds sang and the bees buzzed, unlike the monotone, monotonous field that sits in its place today.

There are seeds of hope in the National Trust’s campaign to plant four million fruit trees by 2030. But why not plant and care for a fruit tree yourself? You get the fresh, chemical-free fruits of your labour and nature gets a prime home.

Sometimes what is best for the birds and bugs is not the fashionable ‘rewilding’ of Britain but the human care of an apple tree. Like my grandfather’s orchard of mellow autumn memory. A British Eden.