Australian MPs from across the political spectrum have labelled Hong Kong’s decision to disqualify a dozen pro-democracy candidates from local elections and a delay in the local poll as an unacceptable obstruction to democracy.

Hong Kong's government announced on Friday night the September elections would be delayed by a year, as the city attempts to suppress a second surge of COVID-19 and the popularity of opposition candidates surges.

The Hong Kong government triggered an emergency order to postpone the elections.

Chief Executive Carrie Lam said the government had the backing of Beijing after warning the city could see a large-scale community coronavirus outbreak. Hong Kong has recorded consecutive days of more than 100 infections.

“The announcement I have to make today is the most difficult decision I’ve had to make in the past seven months,” Lam said on Friday.

“We want to ensure fairness and public safety and health, and need to make sure the election is held in an open, fair and impartial manner. This decision is therefore essential." 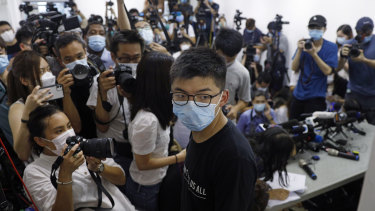 Wong said on Friday he would continue to resist Beijing's crackdown after more than 600,000 Hongkongers voted in democratic primaries despite being warned they could be in breach of the new national security legislation. The candidates were disqualified after they were found to have expressed "an objection in principle" to the new laws which criminalise dissent.

"Beyond any doubt [this] is the most scandalous election fraud era in Hong Kong history," he said.

Students aged between 16 and 21 were on Thursday arrested for making social media posts deemed to be in breach of the new laws imposed by Beijing on the former British colony.

Ahead of Friday's announcement 13 Australian MPs including Liberals Andrew Hastie and James Paterson, as well as Labor's Daniel Mulino and David Smith, signed an inter-parliamentary alliance motion calling for the international community to ramp up its response.

"These actions further curtail Hong Kong's way of life and will exacerbate existing grievances in the city at a time of increased tension," the group of more than 100 MPs from Australia, Canada, Europe, Japan, Britain and the United States said.

"The decision to disqualify democratic candidates and the anticipated delay to September's Legislative Council elections represent unacceptable obstructions to the democratic process in Hong Kong and raise further concerns about the erosion of rights and freedoms in the city."

“It is obviously now illegal to believe in democracy. This is the sort of behaviour that you would expect in a police state."

Benedict Rogers, who co-founded the UK Conservative Party's human rights commission called for the British government to implement Magnitsky-style sanctions, which would strip British assets from Chinese officials involved in the crackdown.

Foreign Affairs Minister Marise Payne asked the Joint Standing Committee on Foreign Affairs to inquire into the use of targeted Magnitsky-style sanctions to address human rights abuses in December. Government sources expect the report to be favourable when it is handed down later this year.

If passed, the measures, which were originally focused on human rights abuses in Xinjiang, could be used to target Chinese officials involved in Hong Kong over their investments in Australia. Hong Kong is Australia's fifth-largest foreign direct investor, with $140 billion in direct and portfolio investment last year, surging by 13 per cent since 2017.

Human rights groups have condemned China's actions in the global financial hub, warning it risks turning the Hong Kong legislature into a rubber-stamp parliament for the Chinese Communist Party.

"This mass disqualification appears to be a concerted effort specifically targeting candidates who advocate viewpoints at odds with those of the government," Amnesty International said. "This move is likely to intensify the climate of fear and tension in Hong Kong."

The ongoing position of the Australian Federal Police in Hong Kong has also become highly sensitive after China terminated Hong Kong's criminal cooperation agreements with Australia, forcing the AFP and the Department of Foreign Affairs to assess its operations. The AFP's Hong Kong bureau has been a key outpost for investigating drug trafficking and fraud in the region.

The Morrison government suspended its extradition agreement with Hong Kong in July after the passage of the national security laws.