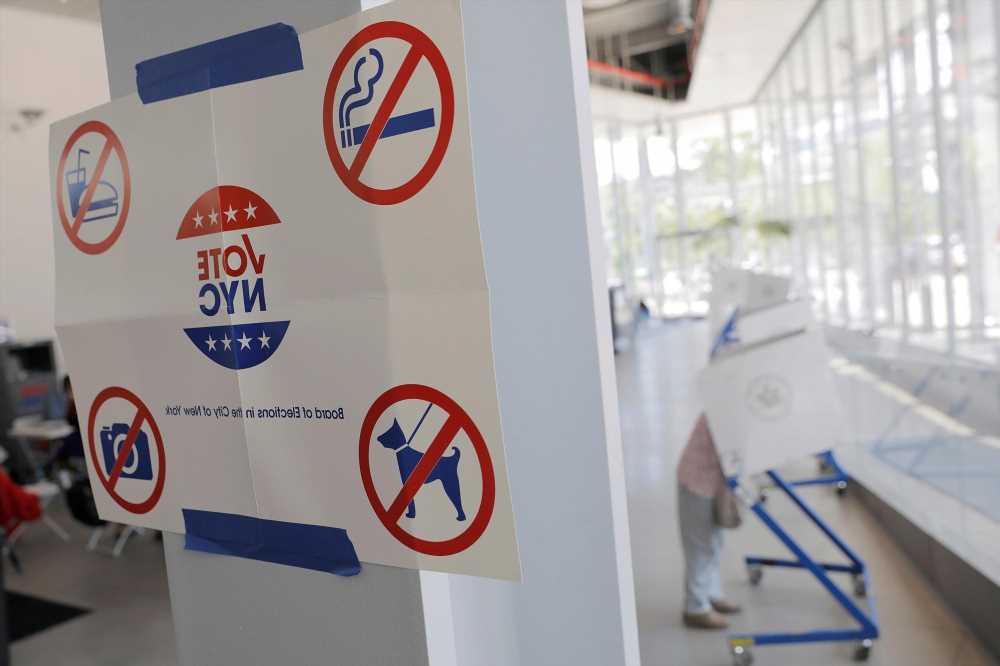 Democratic hopefuls barnstorm across NYC with primary hours away

‘Progressive’ Maya Wiley is anything but

New Yorkers across the five boroughs will head to the polls Tuesday to cast their ballots in the pivotal Democratic primary elections to select the party’s nominees for mayor, comptroller, the City Council and other key posts.

It’s the first citywide election to utilize the Big Apple’s new ranked-choice voting system, which allows voters in the primary to pick their favorite candidate in the race and then rank four more candidates — eliminating the need for a run-off election.

But in the likely event that no Democratic candidate garners more than 50 percent of the vote, the city likely will not find out who the presumed next mayor will be until mid-July. Here’s a guide to what we’ll know and what we won’t know on primary night.

How to vote on Tuesday:

What will we know Tuesday night?

We’ll know a good bit about the overall shape of the race.

Board of Elections officials have promised they will make the initial tallies of the first round selections cast during early voting and on primary day that night.

That will give us a rough idea of how many people turned out to vote and the size of the front-runner’s lead — powerful clues in determining if the trailing candidates can battle back by winning the voters’ second-, third-, fourth- and fifth-place selections.

Will anyone have a big enough lead to be declared the likely winner Tuesday night?

Unless all of the recent polling is way off — no.

When will we know the ranked-choice voting results?

The BOE has promised to run the first round of tabulations for ranked-choice voting on Tuesday, June 29.

That tally will provide preliminary results of the election’s outcome by computing the winner based on ballots cast during early voting and on primary day.

However, that calculation will not include many of the potentially 220,000 absentee ballots. Why? Officials will not begin to open the envelopes containing those until June 28 and the ballots have until June 29 to arrive at BOE offices for counting, provided they were postmarked by June 22.

The BOE says it expects to have a significant chunk of the absentee ballots counted by July 6 and will rerun the results that Tuesday to incorporate those votes in the tentative rank choice outcomes.

Officials say they will continue to count the absentee ballots and will recompute the rank choice outcomes every subsequent week until all the votes are counted.

Why does ranked-choice voting take so long?

The potentially month-long lag between Primary Day and getting a final outcome has everything to do with state election law and city Board of Elections operations — and not ranked-choice voting itself.

The system is entirely computerized, so once all of the ballots are scanned in, the ranking calculations can be completed in just minutes.

“Once all the data is received, the software will make the rounds go very quickly,” city BOE deputy executive director Dawn Sandow told the City Council in May.

The delays, she said, were the fault of “statutory requirements, that’s what it is.”

Are there Republican primaries, too?

Yes, there are, though there are significantly fewer races than in the Democratic Party.

For instance, in the GOP mayor’s race, former talk show host and Guardian Angels founder Curtis Sliwa is challenging Fernando Mateo, a restaurateur and former spokesman for an association of cabbies. There are also contests for the Queens and Staten Island borough presidencies.

However, much of the attention is focused on the Democratic primaries in New York because Democrats outnumber Republicans by roughly 8:1 and control virtually every facet of city government.

We’ll likely know who won the GOP mayoral nod Tuesday night because there are only two candidates in the race, so there’s no need for rank choice voting.