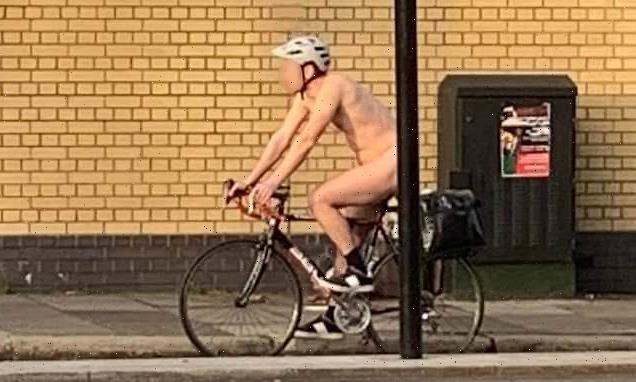 That’s got to be a bit chilly! NUDIST cycles down a central London street during rush hour wearing nothing but a helmet, socks and trainers

A man has been spotted cycling naked through London in broad daylight wearing nothing but a helmet, socks and trainers.

The rider was seen joining commuters on the capital’s roads at 7am on Tuesday morning on near King’s Cross in central London.

The man, who appears to be in his late 30s, seemed completely unfazed by passing traffic, or the chilly 6C temperatures.

Making sure to follow the Highway Code, he patiently waited for the lights to turn green while stopped in a cycle lane. 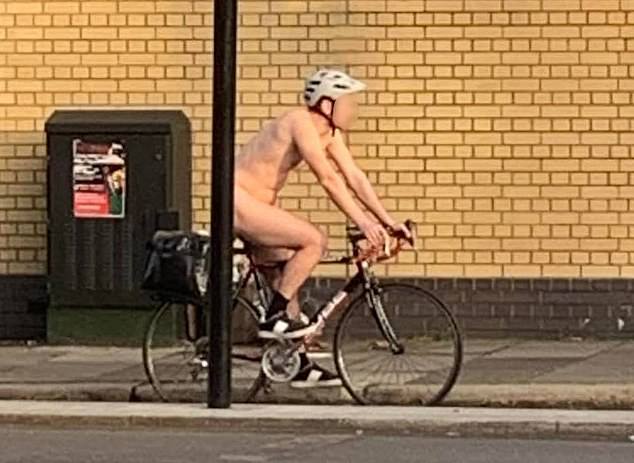 He chose only to wear a black pair of trainers, black socks and a white protective helmet for safety during his revealing early morning ride.

James Reynolds captured a photo of the cyclist before posting it on social media, writing: ‘I saw this geezer riding to work naked on his pushbike this morning.

James, a construction worker from Lincolnshire, said he ‘couldn’t believe his eyes’ as he stood at traffic lights to cross the road.

‘I was flabbergasted at first,’ said James, 33. ‘I walked up to the pedestrian crossing, looked to my right and had to look twice and thought, “am I seeing what I’m seeing?”

‘But this is London and I’ve worked in the city for 10 years and nothing really surprises me anymore.

‘So I thought “well fair play to him” and walked on… It’s only the human body and as long as he wasn’t trying to offend anyone I didn’t see a problem.

‘I did have to take a picture though because I wasn’t sure if people would believe me if I told them. 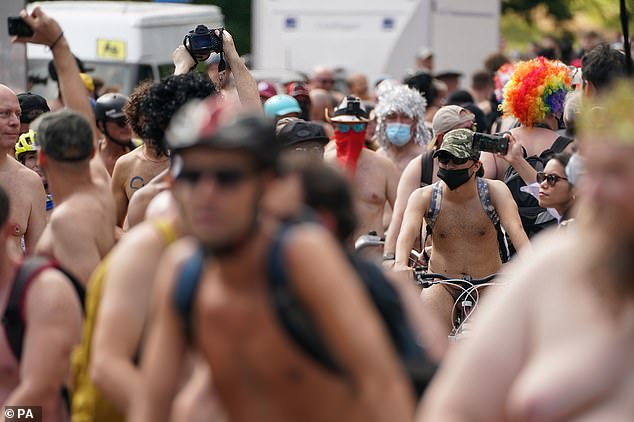 The man is a bit too early to be joined by other nude cyclists in the World Naked Bike Ride event in London, which is set to return on June 11. Pictured: Last year’s event

‘I made eye contact with the guy and he didn’t seem phased one bit. He was well groomed and looked pretty normal.

‘He had his helmet on so he was being safe at least.

‘To be honest, I hope he was doing it for a dare or because he’s happy doing it, perhaps a naturist or something, and that he wasn’t having some sort of mental health crisis.

‘But we can only speculate.’

The post has collected over 1,000 likes with hundreds of comments and shares from users who were left in stitches by the brazen biker.

The man is entitled to cycle naked, as the public nakedness is not actually illegal.

Under the Sexual Offences Act 2003, in England nudity is not illegal unless there is intent to cause alarm or distress to others.

It would appear however that the man is a bit too early to be joined by other nude cyclists in the World Naked Bike Ride event in London, which is set to return on June 11.