Last time clock was at two minutes to midnight was in 1953, when US and Soviet Union were testing hydrogen bombs. 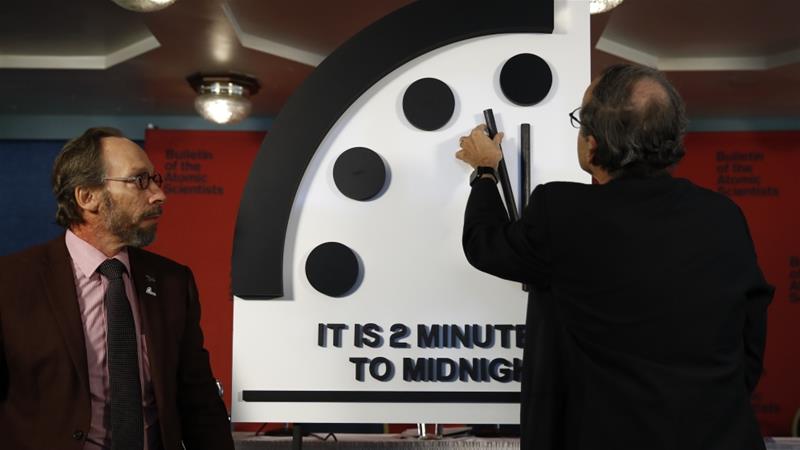 The symbolic Doomsday Clock, which represents how close humanity is to destroying the planet, is the nearest it has been to signalling the end of the world since 1953.

The clock was moved forward by 30 seconds on Thursday by the Bulletin of the Atomic Scientists because of mounting concern over nuclear war and climate change.

The last time the clock was at two minutes to midnight – where midnight represents global catastrophe – was during the Cold War years, when the United States and the Soviet Union were testing hydrogen bombs, 65 years ago.

2017 had proved to be a “perilous and chaotic” year, said Bulletin President Rachel Bronson.

“We saw reckless language in the nuclear realm heat up already dangerous situations and re-learned that minimising evidence-based assessments regarding climate and other global challenges does not lead to better public policies.

“Major nuclear actors are on the cusp of a new arms race, one that will be very expensive and will increase the likelihood of accidents and misperceptions. Across the globe, nuclear weapons are poised to become more rather than less usable because of nations’ investments in their nuclear arsenals,” Bronson said.

Richard Somerville, a board member at the Bulletin, told Al Jazeera he hopes re-setting the clock will raise awareness of the risks of nuclear warfare and climate change.

“One of our main motivations in even having the Doomsday Clock and going through the trouble of setting it every year is to motivate people to be concerned, to learn about these issues, and to make their views and concerns known to their governments,” Somerville told Al Jazeera.

I am saddened but not surprised that this year, the #DoomsdayClock has been moved to 2 minutes to midnight, the closest it has ever been set towards global midnight and the first time it has been at that time since 1953 #turnbackthedoomsdayclock

“US-Russian relations have deteriorated. There’s no ongoing high-level talks about nuclear arms control between the US and Russia – the two countries which between them have almost all of nuclear weapons in the world today.

“I think it’s this lack of strong international action that concerns us, and that’s very much true in the area of climate change as well,” he said.

The Doomsday Clock has indicated how close humanity is to self-destruction since 1947.