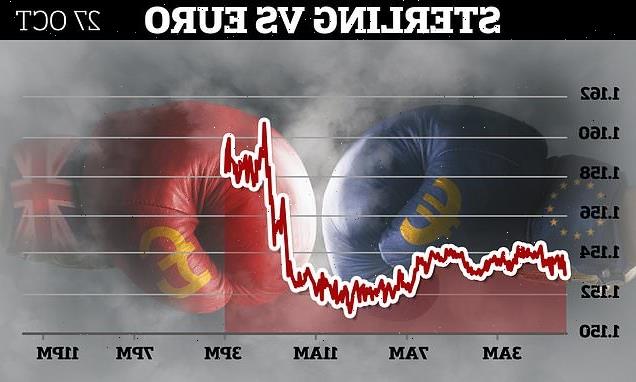 The Pound soars against the Euro: European currency falls in value after ECB raises interest rates and vows to keep printing money in a bid to tackle inflation with £1 now worth €1.16 – the highest since September

Sterling soared to its highest value against the Euro since September after the European Central Bank vowed to keep printing money until 2024.

While the pound has continued stabilising since former Prime Minister Liz Truss’s disastrous mini-budget, the Euro continued to slump on Thursday as the ECB desperately works to raise borrowing costs to stave off a recession.

The pound stood at 1.1594 against the Euro at 4.30pm – having rallied more than 0.5 per cent since trading opened this morning as investors continue to shy away from the bloc’s currency.

Thursday’s mark saw sterling reach its highest level against the Euro since September 6.

Meanwhile, the yield on gilts – government bonds – has fallen back following the resignation of Liz Truss meaning borrowing costs for the Government have dropped.

In the two days after Prime Minister Rishi Sunak took power with a promise to fix the mistakes of his predecessor and stabilise the economy, sterling rose around 3 per cent against the dollar to climb to an almost six-week high overnight.

‘While the market is relieved that Sunak and Hunt have taken the reins of the UK economy, the fundamental backdrop remains very sour and the headwinds facing the pound are still significant,’ Rabobank currency strategist Jane Foley said. 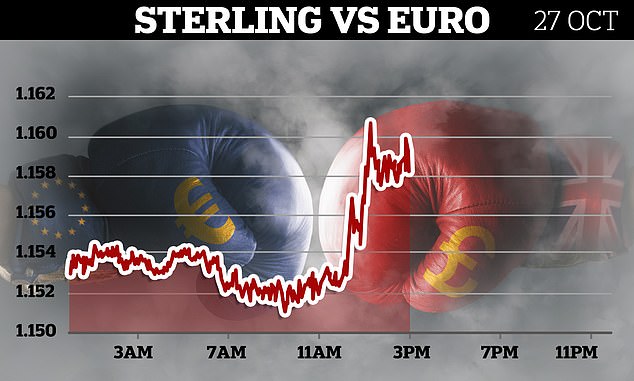 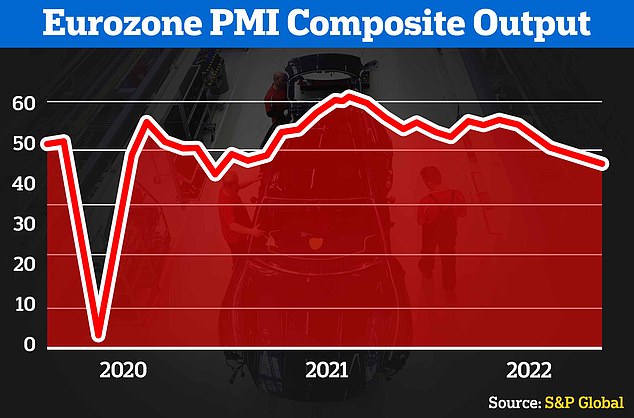 The S&P Global Flash Eurozone composite Purchasing Managers’ Index (PMI), seen as a good guide to overall economic health, fell to 47.1 this month, down from 48.1 in September, as soaring inflation and high energy prices hit Europe

Thursday saw the ECB’s third consecutive interest rate hike – taking rates to their highest level since January 2009 as they vowed to continue printing money until 2024.

Quantitative Easing is a money printing method by central banks to accompany interest rate cuts to kick start economic activity and spur demand when an economy is in recession or at least struggling.

With the bloc facing inflation of more than 10 percent, the ECB again sent interest rates soaring as they aggressively try to rein in rising prices.

In his first speech as Prime Minister on Tuesday, Mr Sunak vowed to fix the ‘mistakes’ of Ms Truss’s leadership as he braced the nation for ‘difficult decisions’ ahead.

Sterling gained more than a cent against the dollar within the space of an hour as several ministers who served under Ms Truss stepped down, including business secretary Jacob Rees-Mogg.

Meanwhile, the interest rate on a 20-year government bond stood at 3.6 per cent after topping 5 per cent following ex-chancellor Kwasi Kwarteng’s unfunded tax cuts. This effectively means it is now cheaper for the Government to borrow money.

Sterling had slumped to its lowest value in decades following then-Chancellor Kwasi Kwarteng’s explosive mini-budget that promised the biggest set of unfunded tax cuts in half a century.

The ECB today raised rates by an expected 75 basis points to 1.5pc overall – with further hikes over the coming year appearing all but certain as the Eurozone battles with the looming threat of recession.

He said: ‘The heightened political and economic uncertainty has caused business activity to fall at a rate not seen since the global financial crisis in 2009, if pandemic lockdown months are excluded.’

Economic output ‘looks certain to fall in the fourth quarter after a likely third quarter contraction, meaning the UK is in recession,’ he added.

The latest official data showed that economic output fell 0.3pc in the three months to August compared with the previous quarter. The services sector saw its first decline in activity since February 2021, when the UK was just readying to emerge from the final Covid lockdown.

John Glen, chief economist at the Chartered Institute of Procurement & Supply, said: ‘Concerns over rising energy and food bills affected consumer appetite for pubs and restaurants, and demand was scaled back.’ 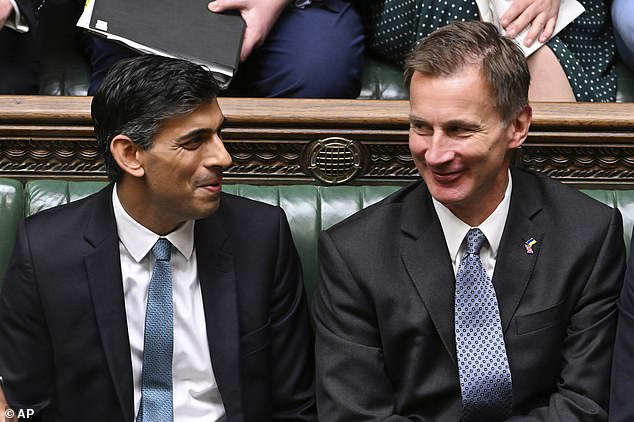 Rishi Sunak and Jeremy Hunt are said to be considering using falling gas prices and a ‘dullness dividend’ reaped from financial markets after the change in government to rein in their drastic plans.

But there was some sign that red-hot inflation was starting to ease, as the latest rise in operating expenses was the least marked for 13 months.

While the Bank of England may be relieved that cost pressures are beginning to lift, as it tries to wrestle down the rise in the cost of living, Williamson said it was unlikely officials would be able to take their foot off the interest rate hike pedal any time soon.

The Bank has been bumping up rates since December to encourage saving rather than spending and keep a lid on prices. Yet cost pressures were still stronger than at any time in the 20 years before the pandemic – and the service sector in particular was struggling with energy bill rises and leaps in staff wages.

Markets are pricing in a 0.75 percentage-point hike for the next monetary policy meeting on November 3, set to take rates to 3pc.

‘On top of the collapse in political stability, financial market stress and slump in confidence, these higher borrowing costs will add to speculation of a worryingly deep UK recession,’ Mr Williamson added.

The Chancellor yesterday announced that the medium term fiscal announcement would be delayed from Halloween to November 17 to allow time to rework the economic plan amid a £40 billion black hole in the nation’s finances.

Analysis has today shown that the two-week postponement cut the figure by up to £15 billion with the interest rate on government gilts and international gas prices both falling swiftly.

The fortnight delay will also allow the Office of Budget Responsibility to base its forecasts for UK finances on more recent economic conditions.

Meanwhile, gas prices have halved, crashing from £190 per megawatt hour last month to around £90 in international markets.

A spokesman for the OBR said: ‘Had our forecast been published on October 31, it would have been based on market determinants, including for gas prices and gilt yields, from the early to middle part of October.

‘Postponing the date to November 17 means that we will take a later window for these market prices.’