Our Notre-Dame de Paris burning! My Paris! Am heartbroken. Horrified to watch the huge blaze engulfing and devastating Notre-Dame Cathedral. The images are terrible, unbearable. The flames raging through the main spire and its roof. Both then collapsing. Intense emotion and powerlessness at seeing this awe-inspiringly beautiful 850-year-old cathedral ravaged by fire.

Flames and smoke rise as the spire on Notre Dame cathedral collapses.Credit:AP

It is not possible to think of Paris without thinking of Notre-Dame. It is geographically at the heart of Paris, as it is kilometre zero. It is loved by Parisians, by French people, indeed people all around the world. It has withstood many centuries and wars. Its bells rang out calling all Parisians to celebrate the end of the Second World War. It is not only the most important for the Catholic Church in France; it is also the heart of one of Europe's greatest and oldest cities. 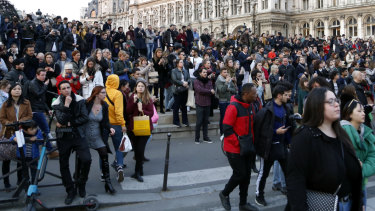 Parisians watched as flames and smoke rise from Notre-Dame cathedral.Credit:AP

In my case, it is the beautiful city where I was born, the city where I first grew up and where I later went to the Sorbonne.

I say "our" Notre-Dame because it punctuated my childhood as it does (did?) the Parisian landscape. As a young journalist newly arrived at the English service of Radio France Internationale, it was the first assignment I was commissioned to do entirely on my own – write, record and edit. The sound and light show in the summer. My first broadcast piece for RFI.

The speed. The intensity of the fire, the devastation as we approach Easter, hurt deeply. At this the most important time in the Catholic and Christian calendar.

People are weeping in the streets. I weep with them.

As I write, firefighters fear it may be impossible to save Notre-Dame Cathedral.

Two pieces of good news, however: no human life was lost and all the works of arts and artefacts are said to have been saved. The cathedral treasure is intact, including the Crown of Thorns and the holy sacraments.

The cause of the fire is not clear and there will be questions about the response by firefighters. Were they under-equipped? That will be for the investigation to determine. President Macron quite rightly cancelled his much-awaited TV address to the nation on Monday night, in which he was due to set out the "first concrete measures" his government was going to take after three months of debates that were held around the country – his response to try to allay Yellow Vest anger.

His tweet was measured: "Notre-Dame of Paris engulfed by flames. The emotion of the entire nation. Our thoughts go to all Catholics and to all French people. Like all our compatriots, I am sad this evening to see this part of us burning."

I, too, am sad to see this part of us burn. We must restore as much as we can and better treasure the cultural heritage we have.

Bénédicte Paviot is UK Correspondent for France 24 and President of the Foreign Press Association in London. Telegraph, UK