“This was not an idle threat,” Adams said at a news conference where he was joined by officials from the FBI, the Metropolitan Transportation Authority and other agencies involved in the arrests early Saturday of Christopher Brown, 21, and Matthew Mahrer, 22, on charges including criminal possession of a weapon. 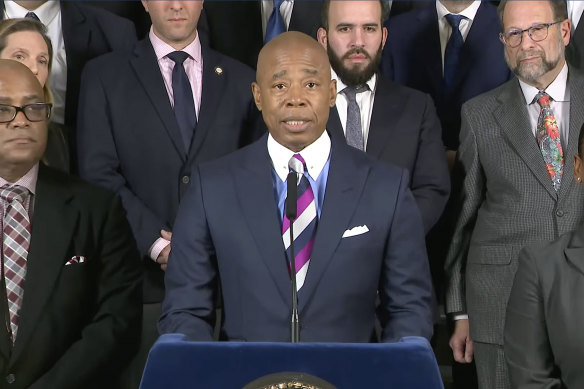 “This was a real threat,” he said.

According to the criminal complaint against him, Brown made a series of threats on Twitter including, on Thursday, “Gonna ask a Priest if I should become a husband or shoot up a synagogue and die,” and then on Friday, “This time I’m really gonna do it.”

Authorities linked the tweets to Brown, of Aquebogue, on Long Island, and identified Mahrer, of Manhattan, as an associate, said Michael Driscoll, head of the FBI’s New York office.

A description of Brown and Mahrer went out to law enforcers, and two MTA police officers spotted the two at Penn Station late Friday and arrested them, police said. 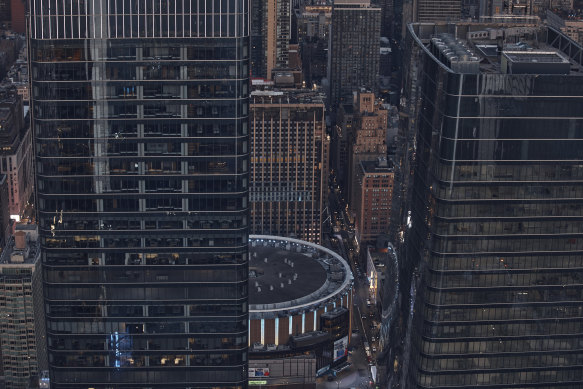 An aerial view of the Penn Station area in Manhattan.Credit:New York Times

Brown had a large military-style knife, a ski mask and a swastika arm patch when he was arrested, authorities said.

Brown, who was charged with making a terrorist threat in addition to the weapons charges, told police that he runs a white supremacist Twitter group and Mahrer is one of his followers, according to the complaint.

“I have Nazi paraphernalia at my house. I think it is really cool,” Brown told police, the complaint said.

Brown said he and Mahrer met at St. Patrick’s Cathedral before buying a gun because he “wanted to get the blessing,” according to the complaint.

Both men were arraigned in Manhattan criminal court over the weekend and are due back in court on Wednesday. Federal charges against them could be filed at a later time, Driscoll said.

Phone messages seeking comment were left with attorneys for Brown and Mahrer.

Adams, a Democrat and a former police officer, said threats against Jewish people or any other group must be taken seriously after attacks like the Buffalo supermarket shooting and Saturday’s shooting at an LGBTQ nightclub in Colorado Springs.

“America must defeat the rising threat of domestic terrorism,” Adams said. “It is real, it is here and we must have a formidable approach to it.”

The threats come as Twitter’s new owner Elon Musk has unrestricted some of the most polarising public figures on the social media platform, including former US president Donald Trump and performer Ye, who has been accused of anti-Semitism.

In a related move, French regulator Arcom said in a statement on Monday it had sent a letter to Twitter asking it to ensure it can meet its legal obligation to guarantee transparent information despite a series of drastic job cuts.

Arcom, the French regulatory authority for audiovisual and digital communication, said that following Twitter’s takeover by Musk, Twitter announced its decision to drastically reduce its workforce by firing half of its employees and terminating the contracts of several thousand contract workers.

“Arcom would like to express its deep concern about the direct consequences of such decisions on Twitter’s ability to maintain a safe environment for its users,” it said.