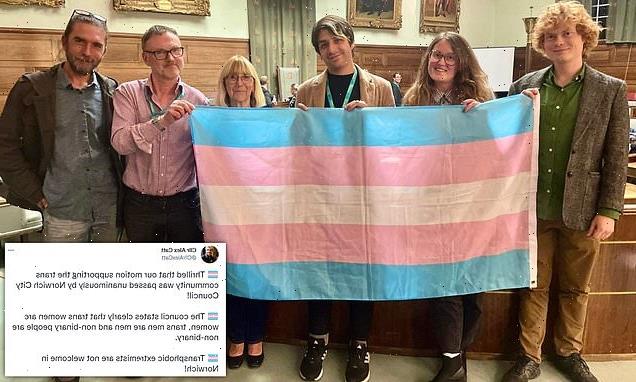 Norwich City Council was met with furious backlash from women’s rights activists after declaring ‘transphobic extremists’ are ‘not welcome’ in the city.

The council on Thursday unanimously passed a motion reaffirming gender identity for transgender and non-binary people.

Councillor Alex Catt, who is part of the Green Party, took to Twitter to tout the measure, saying he was ‘thrilled’ the trans community was being supported. He also declared that those who oppose trans rights are not welcome in Norwich.

Norwich Women’s Rights Group challenged the legality motion and demanded the council clarify how it will ‘ensure the safety, privacy and dignity of women and girls’ in wake of the inclusion policy.

The group also argued Cllr Catt’s tweet featured a ‘combative tone’ and that the council’s message surrounding ‘transphobia and homophobia’ was ‘concerning and undemocratic.’ 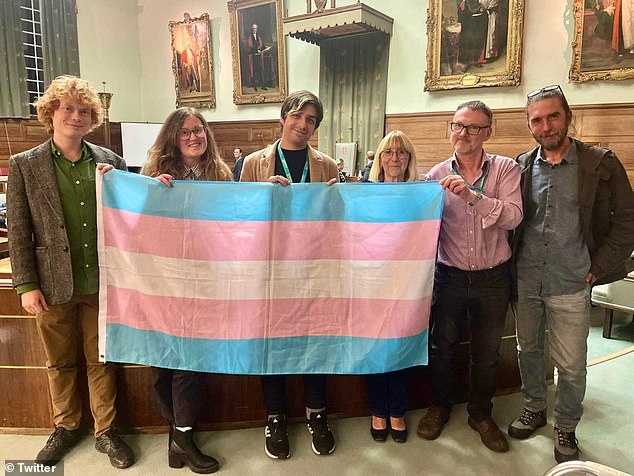 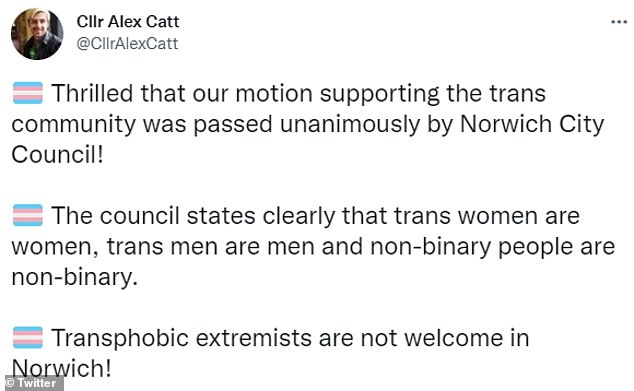 Cllr Catt announced the council’s passage of the trans inclusion motion on Thursday.

‘Thrilled that our motion supporting the trans community was passed unanimously by Norwich City Council!’ he tweeted.

‘The council states clearly that trans women are women, trans men are men and non-binary people are non-binary.’

The councillor added: ‘Transphobic extremists are not welcome in Norwich!’

The tweet prompted backlash from the women’s rights group, as well as Norwich residents, who allege the newly passed motion could put biological females at risk.

‘Norwich Women’s Rights Group challenge Norwich Councillors to clarify how they will ensure the safety, privacy and dignity of women and girls,’ the group said in a statement provided to MailOnline.

‘We remind the Council of their obligations under the Equality Act 2010 to respect all 9 protected characteristics, including sex, age, disability and belief.

Norwich Women’s Rights Group noted that it is ‘easy to spout mantras, feel righteous and gain adulation from loud activists,’ but argued the council needs to realise its ‘policy has profound consequences for women and girls’

‘The Council does not define trans or non-binary, which means self-ID. This is not the law. It is a proven risk factor to women and girls. If any man can call himself a woman, all single-sex spaces become mixed-sex.

‘It is not lawful to discriminate on the grounds of belief. We call upon the Council and unions to ensure that no employee will suffer discrimination if they do not share the council’s credo.

The group added: ‘The combative tone of Cllr Catt’s tweet and Council Leader Mike Stonard’s suggestion that any queries arise from “transphobia and homophobia” is concerning and undemocratic.’

The activist group further called out the council on Twitter, saying they wanted officials to answers queries about the implications of the new ruling.

Norwich Women’s Rights Group noted that it is ‘easy to spout mantras, feel righteous and gain adulation from loud activists,’ but argued the council needs to realise its ‘policy has profound consequences for women and girls.’

The group’s criticisms were further echoed online by Brits who argued the ‘mad’ Norwich City Council’s policy is ‘unlawful.’

‘This would be unlawful,’ Twitter user @historywoman wrote in response to the policy. ‘The 2010 Equality Act allows anyone to treat transwomen as men for specific purposes of the act.

The council was also slammed for allegedly failing to focus on issues that ‘improve the lives’ of Norwich residents.

‘Know what, Norwich City council, do the jobs you were elected to do (and are well paid for), serve every person in the area,’ wrote Caroline Hamilton.

‘Clean streets, clean drains, public ladies loos without blokes wandering in and out, things like that – did your electorate vote for this? Doubt it.’ 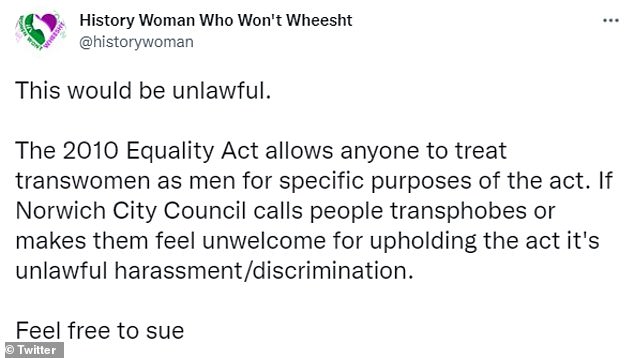 Twitter user @FinnersIsTired chimed in, saying: ‘Well, if Norwich City Council says so, I guess feminists, biologists, science in general and about 600 million years of evolution should all just go home.

‘Or they could try doing things to actually improve the lives of people in the city.’

Other social media users slammed the council for being composed of a ‘bunch of reality-denying lunatics.’

‘Norwich City Council have stated: men are women and women are men. Next week: gravity doesn’t exist and if you aren’t floating you’re a bigot,’ tweeted Pam Harma.

Breakfast Show presenter Julia Hartley-Brewer added: ‘Norwich City Council are mad as a box of frogs. Up is down. Black is white. Truth is lies. War is peace. Bonkers.’

Paul Enbery echoed the sentiment, concluding: ‘Norwich City Council should be taken into special measures. It is plainly being run by a bunch of reality-denying lunatics.’