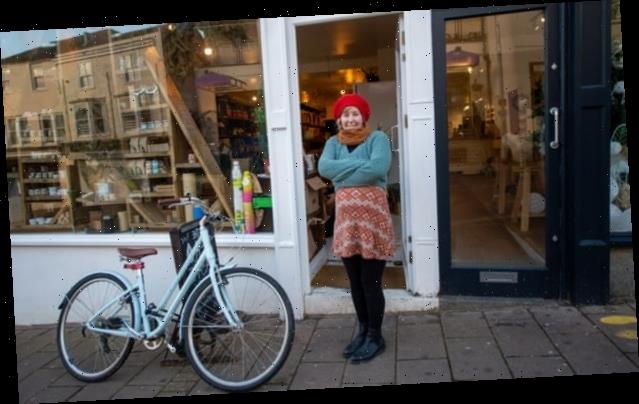 Sarah Blakesley, a business woman and mum, was having a difficult day. “It’s very hectic and very stressful,” she said. “I just want to get today over with, to be honest.”

The start of lockdown 3.0 was having an impact both on commercial and family life. “I run a cleaning company. Lots of clients are shutting down their offices. I may have to furlough workers.”

How to cope with the winter lockdown in the UK

Blakesley, from Exeter in Devon, also has a 17-year-old who will not be going to college for the foreseeable future. “We don’t know what’s happening with college so that’s another worry. I wish we didn’t have to go through this again. I’m concerned about people’s mental health.”

Across the city people were working through tricky professional and family issues.

Sue Jones was in one of the city parks with her son and daughter, both of primary school age. She had to take a day off from her job in a food processing plant to look after them. “I couldn’t get childcare for them in time so had to phone in and ask for the day off. I feel so worn down by the idea of another lockdown.”

The Covid rates for Exeter are by no means as bad as other parts of the country – there were just under 200 new cases per 100,000 people in the seven days up to 31 December.

But most people seemed resigned to the idea that a UK-wide effort is needed. “We’ve got to have a national lockdown. It’s got out of control,” said Alan Taylor, who manages a hardware store in the city centre. “The tiers clearly haven’t worked – people didn’t know what was going on. At least everyone knows the score now.” 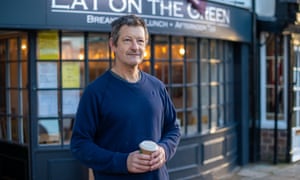 Ben Mangan, the owner of the Eat on the Green restaurant near the cathedral, said he was disappointed at the lockdown. “But we could see it coming and I agree with it. The situation is so dire, the government had no choice. I think we need to all be in it together. It’s fair that there’s one rule for everyone.”

Steph Flisher was sticking a handwritten sign to the window of her dog grooming business informing customers that she was closing. “Safety has to take priority. We’ve all got to come together and get this sorted. The NHS needs us to do this.”

Faye Jennings-Mosquera is allowed to keep her zero-waste food and cleaning products store open. “I think the lockdown needs to happen,” she said. Her partner was at home looking after their two young children. “If we have got two months let’s just do it, let’s all wear masks and be respectful to each other.”

Around the corner at the food bank, teams of volunteers were working hard to prepare food packages, fearing there would be an increase in people unable to afford the groceries they need.

Cllr Philip Bialyk, the leader of Exeter city council, said he “reluctantly” accepted the need for the lockdown. He said deliveries to vulnerable people would be stepped up again and more financial support funnelled to community groups helping people at risk.

“There’s nothing more important than defeating the virus,” he said. “That has to be our main aim. We have to protect loved ones and ourselves. Nobody is safe.”

There were some doubters. Stan Henderson, a lorry driver, said he thought the tier system should have been persevered with. “We were doing OK in the west country,” he said.

But Exeter has had its problems. Just before Christmas the Royal Devon & Exeter NHS foundation trust went to OPEL 4 status – the highest alert level – due to high levels of inpatients with Covid and a large number of staff absences. There are around 30 patients in its Nightingale hospital on the edge of the city.

David Strain, a senior clinical lecturer at the University of Exeter Medical School and the co-chair of the British Medical Association’s medical academic staff committee, backed tighter restrictions and warned there would be no quick return to normality.

“It is important to highlight that this vaccination programme will not allow the return to normal life in February, as the majority of adults on which the economy depends are not in the four priority groups. In four to six weeks’ time when the lockdown is reviewed, there is no guarantee that there will be a nationwide lifting of restrictions.”

Almost 250 miles north of Exeter in Longsight, Manchester, the mood was weary. Apart from three weeks in July, Greater Manchester has been in some sort of lockdown since March last year. 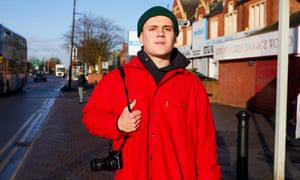 Eliot Riley felt the latest lockdown was “too little too late”. He was hoping to start a teaching job this week at a primary school assisting special educational needs (SEN) pupils, but after the government’s announcement of tougher restrictions, the school said they did not need him.

“I feel like I can’t plan for anything now. I can’t save, and I can’t look forward to anything. Me and my girlfriend had the intention to buy a flat, but that doesn’t seem possible at all,” he said.

“We are both in our early 20s, and I feel the pandemic is robbing us of our life opportunities. This should be the most freeing time for us, instead I just feel very restricted.” 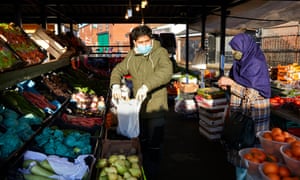 Saki Hussain, who works at Longsight market, remained optimistic. “There is a lot of difficulty, especially with our children now staying at home. But I hope one day, with God’s help, we will win against this disease.”

Jack Weaver, who owns a trophy and engraving shop, said: “You can’t blame Boris. He hasn’t done a good job as far as I am concerned, but I don’t think any of the leaders have. This virus is new and nobody knows how to deal with it. I’m just hoping these vaccines will work and they get them out as soon as possible.”