Premier Daniel Andrews has slapped down comments from Victorian Ombudsman Deborah Glass that the government's underfunding of the watchdog could be perceived as an attempt to undermine the agency's probing of government corruption.

The Premier said Ms Glass' comments, reported in The Age on Wednesday, had "no basis in fact whatsoever" and argued her "rhetoric" was divorced from reality. The Ombudsman, responsible for investigating public sector wrongdoing, said a lack of funding could inhibit her office from carrying out its core functions. 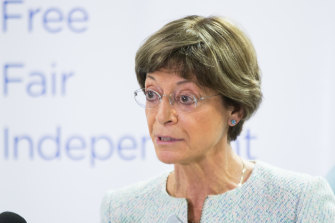 The Ombudsman is investigating alleged branch stacking by Victorian Labor MPs and former minister Adem Somyurek and is probing the Flemington public housing tower lockdown. The office is also investigating whether the administration of state government pandemic relief payments was systemically flawed.

Ms Glass said she "sincerely hope[d] this [was] not a deliberate attempt to undermine my office, but it certainly could look like it," adding the appearance of withholding money from the agency was "very poor."

Responding to the comments, Mr Andrews said "those claims, that rhetoric, that commentary, has no basis in fact whatsoever."

"When I know comments to be wrong, particularly when people are speaking about my motives, I think I am perfectly entitled to be able to correct that record," he said. 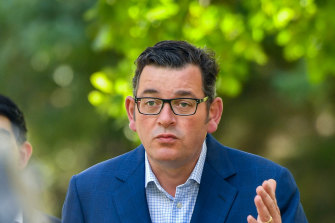 "If for the sake of politeness … you'd like me to let stand comments I don't believe have any basis in fact, that is not the way I've operated for the last six years.

"Whether that is polite or otherwise, that's the nature of the business. These are facts. I put them forward and I don’t resile from them, not an inch. Not true, not factual, not accurate."

The Ombudsman received a funding increase in last week's state budget. The government expended $16.2 million last year and increased its outlay to $19 million for the coming year.

However, Ms Glass said the $19 million in effect amounted to a funding cut because the office spent close to $22 million last year, more than $5 million over-budget, meaning this year's funding was around $2 million less than was required last year.

Ms Glass said she received $6 million, or about one-third, less funding than she requested for 2020-21 and argued the shortfall would hamper her ability to launch investigations and conduct community education campaigns to encourage whistle-blowing on public sector corruption.

Ms Glass launched a joint investigation in June with Victoria's Independent Broad-based Anti-corruption Commission into allegations Labor MPs were engaging in branch stacking. The actions of sitting Labor MPs are being examined after the matter was referred to the Ombudsman by Parliament. IBAC has also complained of critical underfunding.

Ms Glass said the government was "well aware" an additional one-off payment would be required to fund the inquiry into Labor branch stacking, prompted by a series of stories by The Age and 60 Minutes.

The Premier said there was no risk the government could be perceived to be muzzling a body that is investigating his government's actions, saying he would "leave perceptions to others" and focus on "reality".

Mr Andrews said it was common for government bodies to not receive as much funding as they requested.

"The way budgets work is, very few, if any, full funding is provided. That's the nature of budgets, you have to make difficult decisions," he said.

"I think everybody who bids for the budget would say their circumstances were unique, that they were important, they were valued and they needed to be funded."

"[Ms Glass’ comments] should chill Victorians … It's clear the money is insufficient," he said.

"Daniel Andrews' refusal, point blank, to accept what the Ombudsman is saying is a sign of his arrogance."