‘What a self-centred bunch they are’: Nicola Sturgeon blasts ‘vicious’ Tory civil war that has plunged Britain into ‘chaos and crisis’ and says: ‘they all need to go, not just the PM’

Nicola Sturgeon has given her views on the challenge to Theresa May’s leadership, commenting: ‘They all need to go, not just the PM.’

The Scottish First Minister is at war with Westminster over Brexit, which she insists Scotland didn’t vote for.

She seized upon the confidence vote in Theresa May forced this morning, claiming the British government has ‘ceased to function’.

Ms Sturgeon tweeted: ‘Today is a stark reminder that the UK is facing chaos and crisis entirely because of a vicious civil war within the Tory party. What a self-centred bunch they are. They all need to go, not just the PM.

‘While Westminster crumbles further into chaos, with a UK government that has ceased to function, @scotgov will set out our budget for the year ahead.’

But her followers online accused of her hypocrisy, insisting she was trying to break up the UK. One twitter user replied: ‘You’re part of the chaos.’ 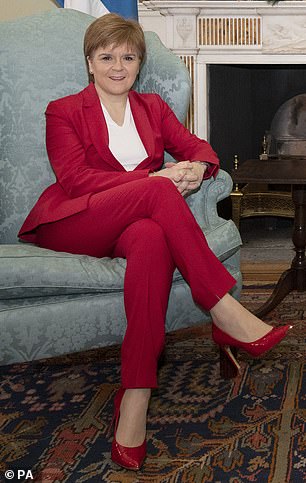 Critics said the SNP leader was ‘stirring things up’

Nick Tilt replied: ‘Classic pot & kettle. All you want is Independence for Scotland by any means possible & to hell with the Union. Good luck to you all if you ever get it as EU austerity will be far, far worse than anything Westminster can impose.’

Euan Davie asked her: ‘Why? Because they are trying to deliver the Brexit people voted for? This Nicola is actually how democracy is meant to work. People vote in a referendum and then the result is respected.’

Yesterday, the SNP leader joined together with the Liberal Democrats, the Greens and the Welsh nationalists Plaid Cyrmu to write to Jeremy Corbyn demanding he call a no confidence vote on Mrs May’s government.

Ms Sturgeon declared that if this tactic did not succeed in forcing a general election, then she wanted Labour to support a second Brexit referendum.