NHS worker, 31, claims she was heckled in the street after ‘botched’ fillers left her with lumpy lips before the salon branded her a ‘bitter liar’ when she complained

An NHS worker claims ‘botched’ lip fillers left her being heckled in the street – only to be branded a ‘bitter liar’ when she complained to the salon.

Stacie Craig blasted a salon in Belfast as ‘disgraceful’ in the online review, claiming the £120 treatment left her with swollen, lumpy and uneven lips.

However, the 31-year-old was stunned when the salon appeared to respond on Facebook claiming Ms Craig ‘didn’t like her look’ and ‘made up this nonsense’ in the review. 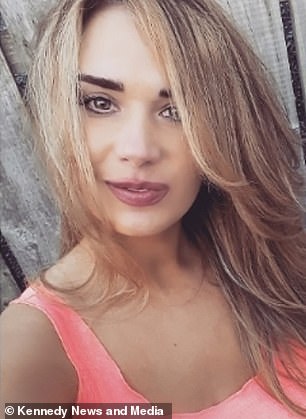 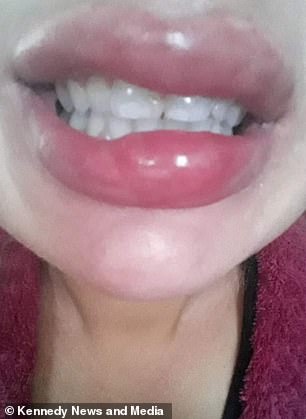 Stacie Craig (left) blasted a salon in Belfast as ‘disgraceful’ in the online review, claiming the treatment left her with swollen, lumpy and uneven lips

Another commenter even accused Ms Craig of Photoshopping the images she shared of her grossly swollen lips.

The stroke rehab assistant hit back at the aesthetic nurse and demanded she ‘own up’ to her mistakes after her lips ballooned to ‘triple their size’.

Ms Craig claimed friends and people in the street said she looked like a ‘monster’ after getting 1ml of filler last month and despite begging the nurse to dissolve it claims she was forced to go elsewhere to fix them.

The disappointed customer, from Belfast, said: ‘My lips were triple the size they should be and were plastic looking.

‘Naturally you have little lines on your lips, but all of that was erased because they were so swollen.

‘I felt there was too much filler deposited in certain areas, it felt like they were going to burst.’

After the treatment, friends began asking Ms Craig ‘what have you done to your lips?’ she said.

‘Some friends and some people in the street were saying I looked like a monster straight after the treatment. It looked horrendous, I felt like a monster.

‘I tried to hide my lips when I went out and about and wore a baseball cap so as not to draw attention to my face.

‘I don’t like offending people so writing a bad review is a really big step for me.’

After weeks of messaging the clinic after the September 26th procedure, Ms Craig posted the review to the company Facebook page on October 15.

Her review read: ‘I would like a refund please.

‘Would not recommend. Lips were left looking botched, symmetrically uneven and had a huge lump of filler pocketed in bottom lip (even 2 weeks later post swelling) that I had to get dissolved (elsewhere).’

Replying to the review, the salon wrote: ‘Such a disappointment when a very rare unhappy client feels it necessary to leave a bad review.

‘This says so much more about the person leaving the review than the actual practitioner.

‘This client had treatment to a high standard and just because she didn’t like her look made up this nonsense, then tried to get a refund which my medical director and I advised wouldn’t be happening.. a bitter review is left.. well this shall be deleted by Facebook.. X’

Ms Craig hit back by posting pictures of her lips after the procedure and wrote: ‘Interesting how this woman has now deleted all the evidence I uploaded.. Well here it is again.

‘How dare u say I posted that review just because I didn’t like my look. None of this was made up nonsense!!

‘Anyone with a pair of eyes can see my look was wrong and botched. Take some ownership of the job you did.

‘Says a lot about the person YOU are when you can’t own up to your mistakes! And that is genuinely the first negative feedback I’ve ever left on a page. I felt u deserved it. 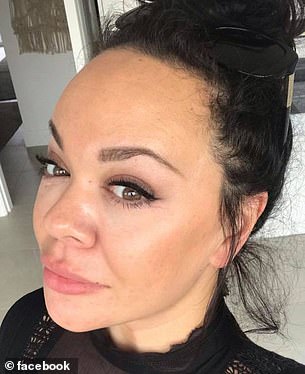 ‘If u do that to more people prepare to hear the same reactions. You are a disgrace. You won’t even say who you’ve been trained by????’

‘Interesting how this woman has now deleted all the evidence I uploaded. Well here it is again….

‘None of my review was made up nonsense. I’m sorry that you are so unprofessional and feel the need to degrade your clients instead of owning up to the mess of your work on my lips.’

Ms Craig got the pout-plumping procedure last month after having it done five times before with another practitioner with no problems.

Taking advantage of the £120 Facebook offer, Ms Craig booked an 11.30am appointment at the nurse’s home.

‘I’ve had it done five times previously and had no problems whatsoever,’ she said.

‘It didn’t feel any different to previous times but I remember looking into the mirror and thinking it looked very plastic and fake – it was a very thick-looking filler compared to what I’m used to.

‘I instantly thought the right side looked bigger than the left and I could see that there was a heavy lump at the bottom – like it hadn’t been deposited properly.

‘I left thinking it might just be swelling and that it would settle down, but even hours later they still didn’t look right.’

Ms Craig said she followed the nurse’s advice and took ibuprofen and antihistamines but when her lips didn’t settle down overnight messaged her for reassurance and begged her to remove the filler with dissolver.

‘I was worried about going to work and wanted them dissolved because they were weird looking,’ she said.

‘However the nurse said she couldn’t for at least two weeks because there was a risk, but I knew this wasn’t the case as I’ve heard of lots of people having them dissolved.

‘I felt like they were going to burst. She tried to reassure me that it was normal and to just sweat it out.’ 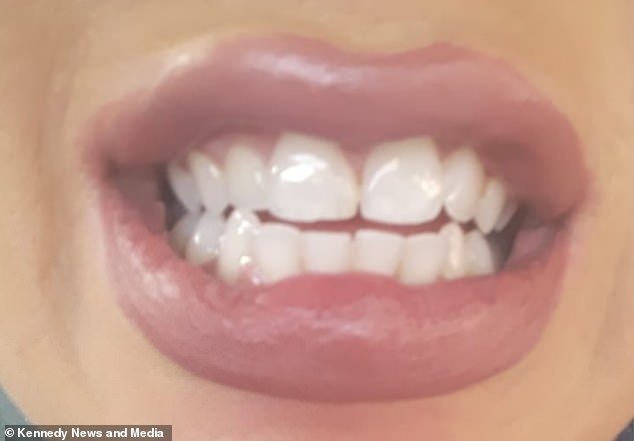 Ms Craig said she felt compelled to write the review after weeks of messages back and forth that didn’t resolve the issue.

‘I didn’t post my review until weeks later because I was still in full contact with her and constantly asking for a refund politely,’ she said.

‘When I mentioned getting a refund via a small claims court she sent me a legal-looking letter with a summary of what we discussed and saying I wasn’t entitled to a refund.

‘Her reply back to my review where it mentioned ‘this says so much more about the person leaving the review than the actual practitioner’ made out I was trying to cause trouble. It was really offensive and degrading.

‘Someone else commented that my photos looked Photoshopped – people are calling me a liar for no reason.

‘I would have been happy if she’d seen me the day of my concerns instead of me having to go to someone else.’

Ms Craig said the experience hadn’t put her off getting the procedure done again, but wouldn’t return to the salon.

‘It hasn’t put me off having lip fillers in future because previous experiences have been fine, it’s just put me off that particular person,’ she said.

‘I will only go to people I know and trust now.’

The salon and the nurse were contacted for comment but did not respond.

How YOU can make the most of a tiny bedroom: Try these tricks interior designers swear by – including playing...

Donald Trump’s defense will end TODAY after trying to put the Bidens and Obama on trial, claiming Rudy Giuliani is...