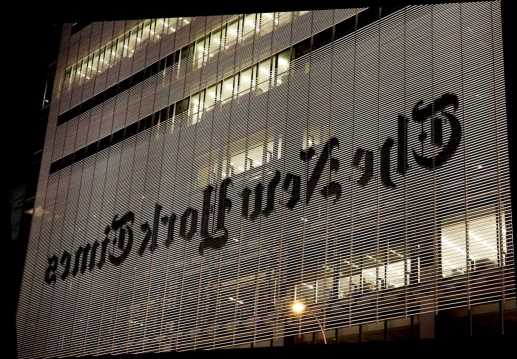 Like Tom Brady, NYC's wealthiest will leave the city and flourish elsewhere

Scared the rug will be pulled again, some top NYC restaurants aren't rushing to reopen

Picking on The New York Times these days is almost too easy, as the Gray Lady routinely renounces or corrects false articles and podcasts and fires staffers who aren’t woke enough for its Twitter masthead.

The Times should next cancel its daily “Coronavirus Tracker,” which posts infection rates and related data from across the nation.

It claims, and has for weeks, that there’s an “extremely high risk level” and an “extraordinarily severe outbreak” of the bug in Gotham. The Times says that it relies for its Big Apple numbers “primarily on reports from the state,” as well as from “health districts or county governments.”

This week, the paper cited an 8 percent test-positivity rate in the five boroughs, based on a 14-day average. The problem: The state data on which the Times says it mainly relies this week cited a seven-day average in the city of 4.39 percent and falling — the lowest rate since Nov. 28. In Manhattan, the most densely populated borough, the seven-day average was a mere 2.59 percent.

The tracker acknowledges that city infections, deaths and hospitalizations have decreased in recent weeks. But the levels to which the Times says they’ve fallen are still wildly overinflated. While there are fudge factors in any source of COVID-19 data, the Times’ claims seem bonkers — because they are.

It’s tricky to compare the Times’ curious findings with those of other American cities, for the simple reason that its tracker doesn’t include positivity-rate data for other cities. It does so only for states and counties, a fudge factor that obscures how out-of-the-box its Gotham data are.

According to their own official figures, most major US cities have positivity rates much higher than New York City’s. It’s 5.88 percent in Miami and Philadelphia; 9.44 percent in Palm Beach; 15.1 percent in Houston; 16 percent in Kansas City. In Los Angeles County, it’s 6.7 percent.

The Times’ overblown New York warnings must be viewed in context of the Gray Lady’s wider lock-down-the-world agenda. The paper rarely reports unqualified hopeful news about taming the virus, whether in The Bronx, Europe or Africa. When it does, the good news is shaded with warnings about mutant strains, rare instances of people who fall ill after being inoculated or the supposed resistance of millions to getting the shots.

A story on Feb. 16 about severe inflammatory damage the virus may cause in young people accurately termed the condition “rare.” Near-nonexistent is more like it. The story cited 2,060 cases in 48 states. Those represent an infinitesimal share of the nation’s 27.7 million reported cases: or less than eight one-1,000ths of 1 percent. Yet the story ran on page one and was trumpeted online under the headline “COVID-Linked Syndrome in Children Is Growing and Cases Are More Severe.”

The Times’ sensationalist approach often inflames other outlets — as it did when the tale appeared on local newscasts hours later without a hint of context.

The Times needs to make the plague seem even worse than its horrific reality to bolster its case for more lockdowns and restrictions, especially in New York City, where the paper has editorialized (not only on its editorial page but in tendentious news stories) against restaurant reopenings at a scant 25 percent indoor capacity.

A column by restaurant critic Pete Wells this week stated, “Some public-health experts believe that now, even outdoor dining in New York City is unsafe while the local risk . . . remains very high.”

Yes, some restrictions are necessary. But lockdowns remain fashionable mainly among those who favor government control over private enterprise, even as infection and death rates are plunging and vaccines promise to curb the virus for good. Lockdowns give vast power to elected officials who can forbid reopenings in any realm — schools, restaurants, sports, houses of worship — unless they’re on the politicians’ terms, whether or not they have anything to do with public safety.

“Governors are easing restrictions at exactly the wrong time,” a Times editorial was headlined last week. Fabricating an “extraordinarily severe” virus outbreak is exactly what our struggling city doesn’t need.