The exhibition includes black and white scenes of the Vietnam war, The Troubles and the recent conflict in Syria. 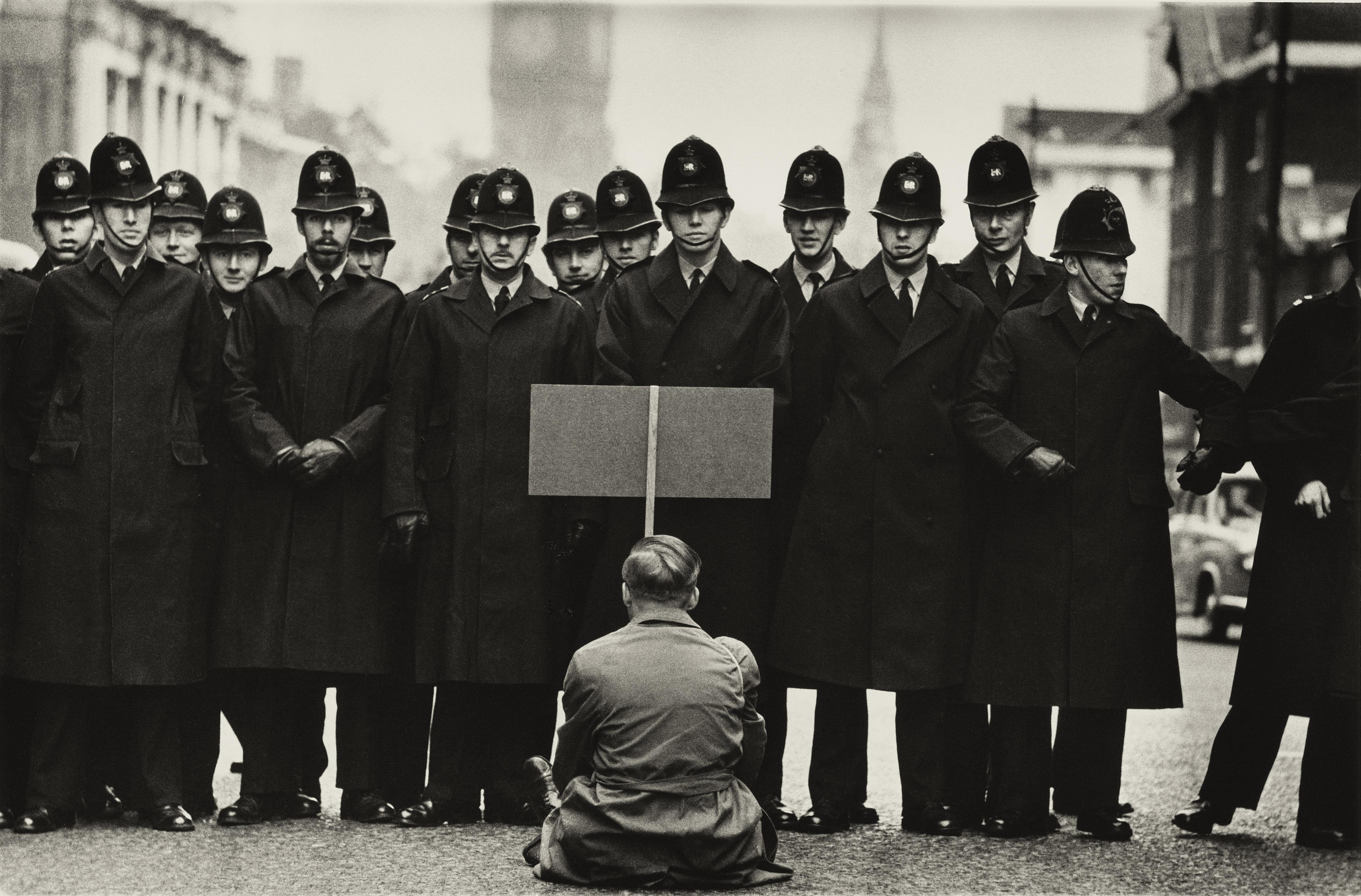 As well as capturing the horror of war-torn countries, the iconic photographer focuses on the trials and tribulations of what is happening on our doorsteps.

Two young boys posed in front of brick wall spray-painted with "No Nazis in Bradford."

The photographer risked his own life to capture the breathtaking images, sheltering from bullets as he took the photographs.

In contrast to the bleak scenes of poverty in London he spent time shooting the rolling hills and glorious landscapes of his hometown of Somerset. 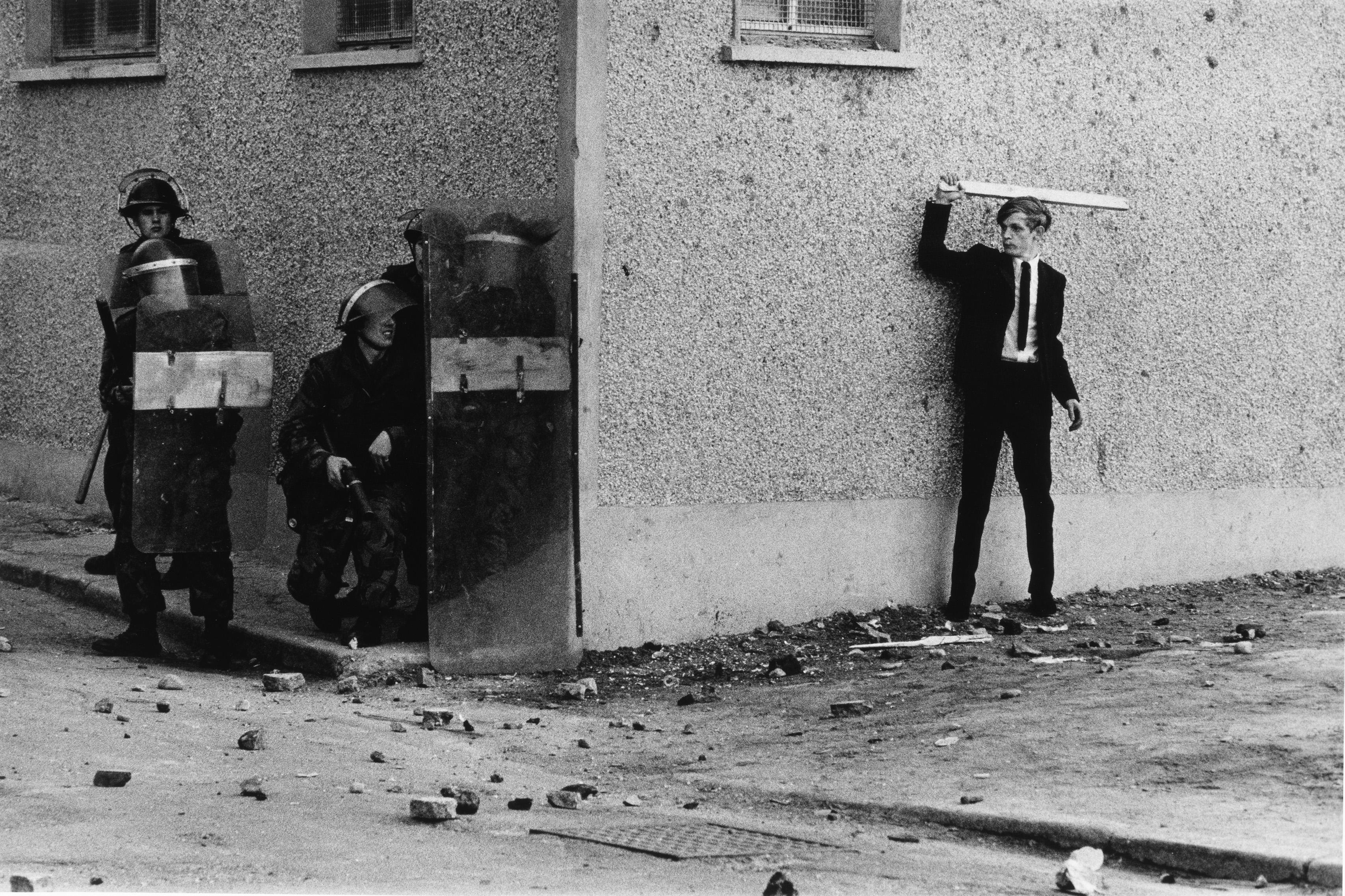 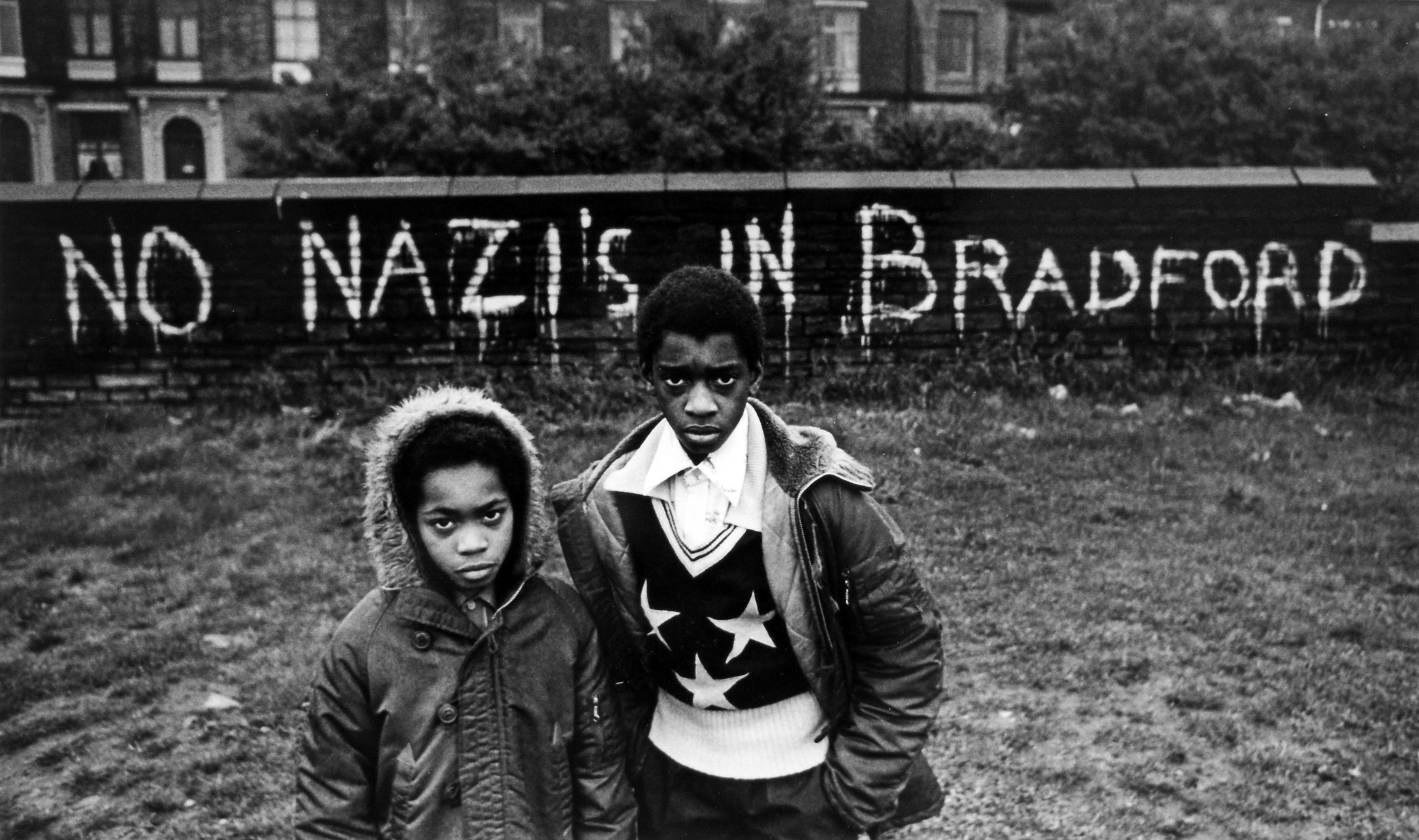 One of the photos on display features a homeless Irishman in Spitalfields, London in 1970.

The whites of his eyes are striking against his dull and dirty skin tone – of which half is hidden behind a wispy white beard.

His hair so filthy that it is beginning to clump together and form natural dreadlocks.

In one shot, a lone protestor sat down with his sign in front of a dozen police officers in Trafalgar Square in 1962. 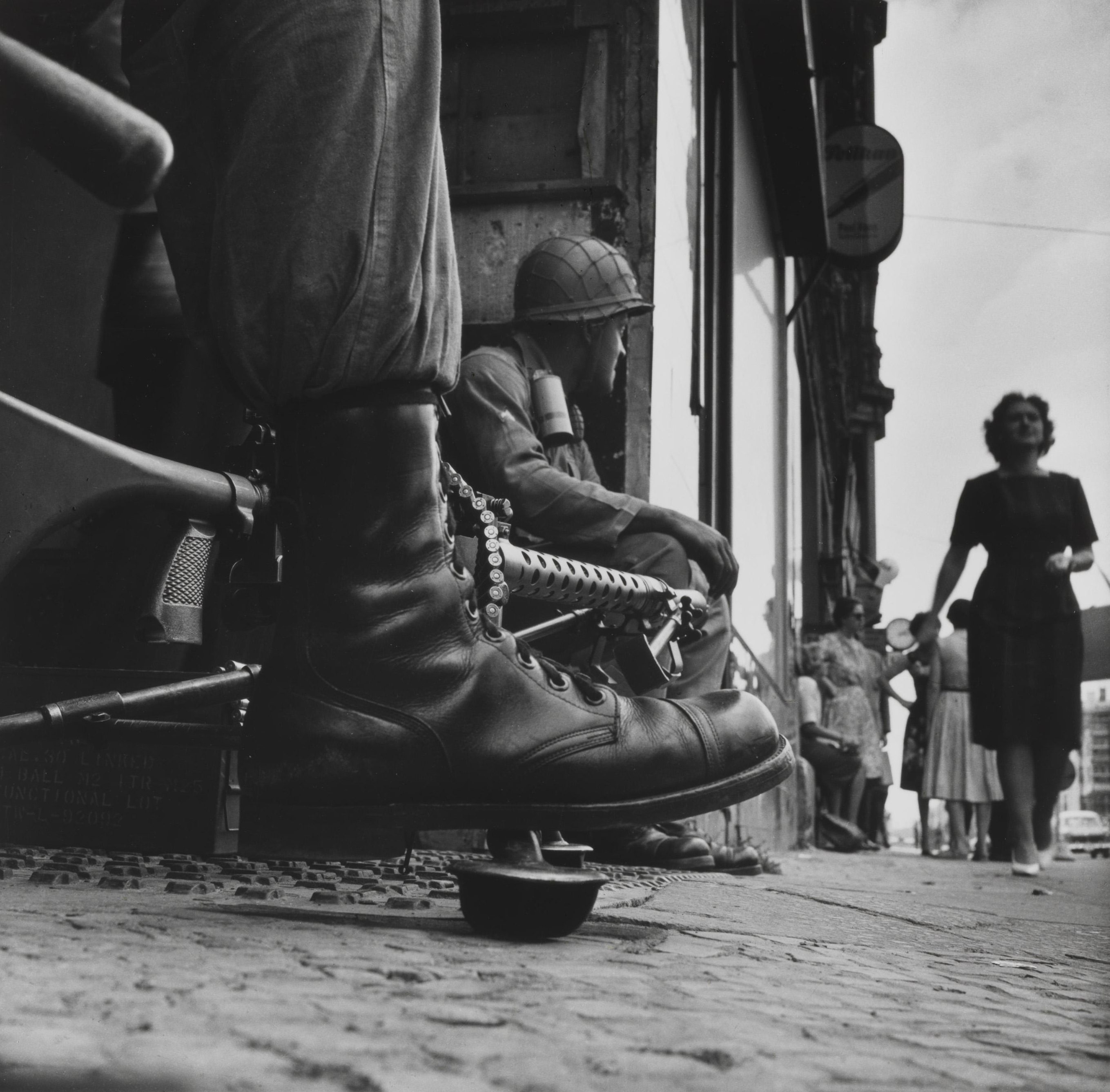 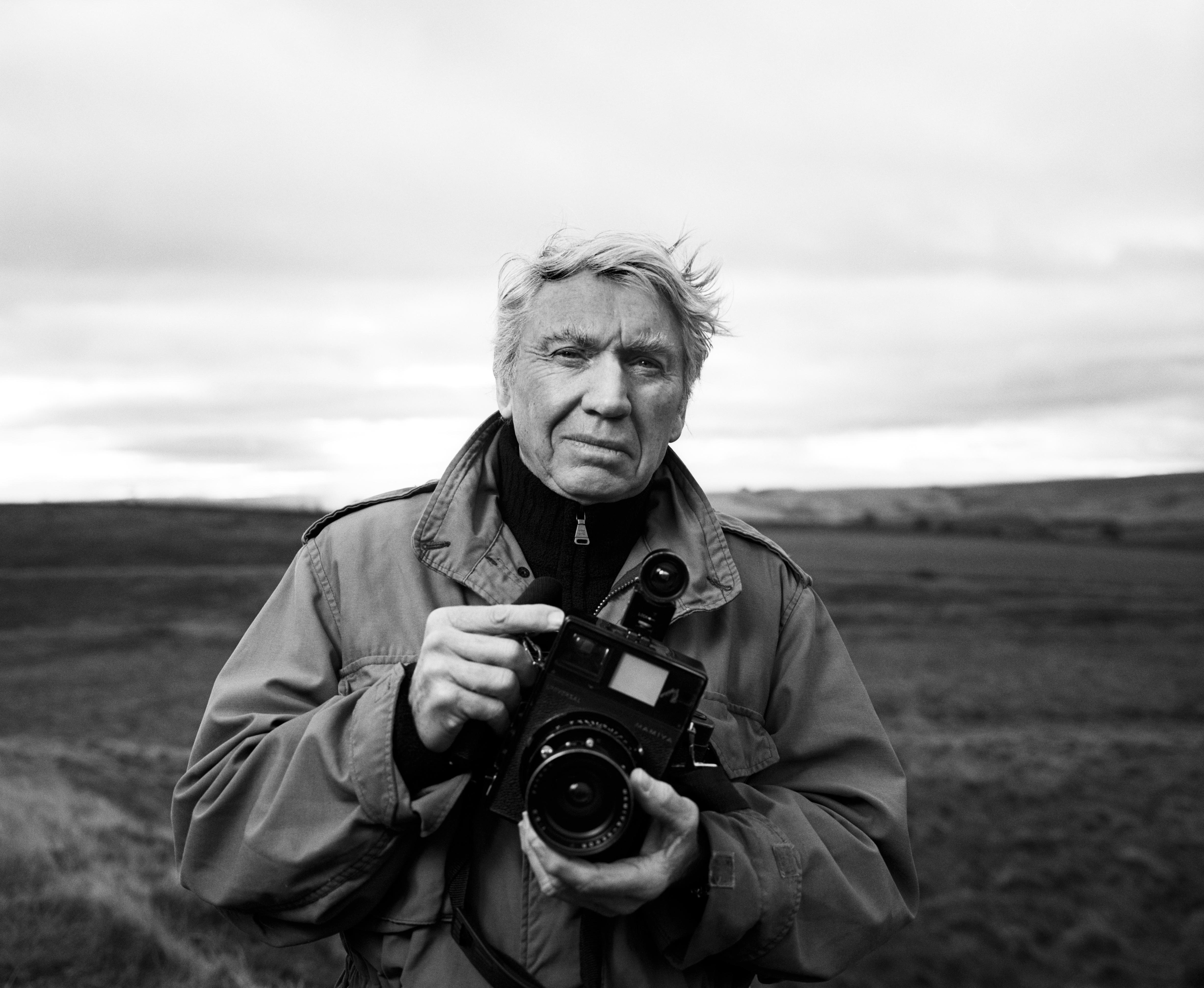 Sir Don McCullin was born in 1935 and grew up in a deprived area in North London as it was bombed by Hitler's Nazis during World War II.

He was the first photojournalist to be awarded a CBE and worked for 50 years in some of the world's notorious war zones.

McCullin has worked in Africa, Asia and the Middle East but his career began after he photographed a London gang named The Guv'nors.

He presented the gang shots to the picture editor at The Observer in 1959, aged 23, earning his first commission.

In 1961 he won the British Press Award for his essay on the construction of the Berlin Wall.

His first taste of war came in Cyprus, 1964, where he covered the armed eruption of ethnic and nationalistic tension, winning a World Press Photo Award for his efforts.

Over 250 photographs, all printed by McCullin himself in his own darkroom will go on display at the Tate from Feburary next year.