The man charged with murdering his mother, Pyrhia Sarusi, and aunt, Australian academic Professor Lily Pereg, is on a hunger strike in an Argentinian prison.

Sources in Mendoza say that Nicolas Gilad Pereg is refusing to eat while he is on remand on charges of homicide and aggravated homicide for the deaths of his mother and aunt. 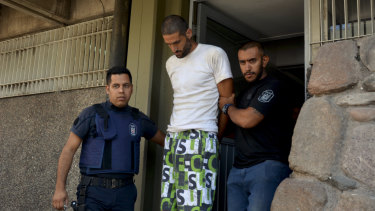 Gilad Pereg, the son of one of two missing sisters found dead in Mendoza, Argentina, is arrested.Credit:AP

Mr Pereg was arrested over the weekend in the South American city, two weeks after the sisters disappeared without a trace.

Investigators looking into their disappearances allegedly found DNA evidence on a t-shirt and a bag of cement connecting Mr Gilad to the murder of his mother and her sister.

On a second search of the property, forensic police uncovered the bodies of the two women buried in shallow graves on the edge of Mr Gilad's property. 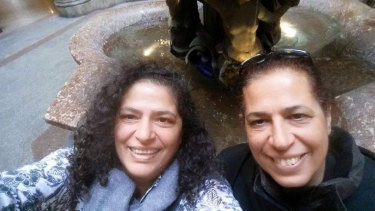 Mr Gilad is now in the city's Almafuerte Penitentiary, which in 2016 was denounced by the local judiciary for violating basic human rights.

Prosecutor Claudia Rios said that Mr Pereg threatened self harm if he was arrested and not allowed home to feed his cats.

Local media have reported that the home that Mr Pereg lived in was squalid, with dead dogs and cats found inside the premises.

He is facing the prospect of life imprisonment if convicted of the two homicides.

A court date has not yet been set, because the investigation into the sisters' death continues.

Contrary to reports, sources say that autopsy results show that the bodies of the two women were mutilated after they were killed, not before.

The sisters' bodies will be repatriated to Israel, where they were born and where Ms Sarusi lived up until her death.

On Tuesday, Mendoza's attorney-general said that “problems of a family nature” had led to the alleged "double crime".

There has been an outpouring of grief from the scientific community in the wake of the deaths.

"Lily was fascinated by living things, from the birds and kangaroos in her backyard at Invergowrie, to the tiny coral polyps and bacteria that we worked on together.

"Her curiosity and urge to investigate was tempered by her kind and gentle nature, and a desire to do no unnecessary harm to any living creature, no matter how small or simple it was. This same kindness and generosity was extended to the people around her," former PhD student Scott Goodwin wrote on Facebook.

The European Geosciences Union also paid tribute to Professor Pereg, calling her a devoted member of the collective.

"Lily was an excellent scientist, working with enthusiasm, passion, integrity and with a deep understanding of soil microbiology. Besides her devotion to the Soil System Sciences Division, where she was acting as president, we will recall her friendly, kind and honest nature," EGU SSS Science Officer Claudio Zaccone said.