A Chinese boy has been saved after dangling off an anti-theft metal frame outside a six-storey window.

The six-year-old had fallen out of the flat while being left unattended at home, according to state media.

A neighbour climbed across the building’s façade with his bare hands to rescue the child. He then supported the boy’s body with his shoulder for about an hour without safety harnesses. 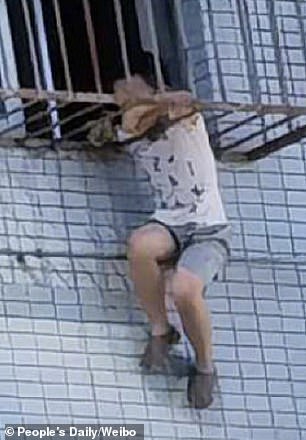 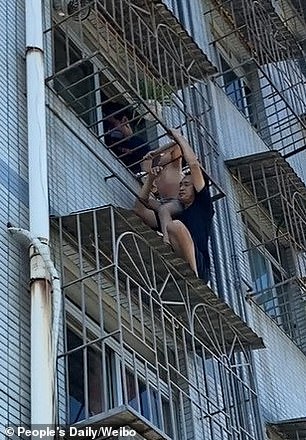 The Chinese boy gets stuck in an anti-theft metal frame outside a six-storey window while being left at home alone (left). A neighbour comes to his rescue by holding him up (right)

Firefighters eventually broke into the boy’s home and pulled him into safety.

The boy was spotted swinging in midair dangerously at a residential compound last Friday in the city of Xiamen in south-eastern China’s Fujian province, according to a social media post from People’s Daily.

The unnamed child allegedly fell through the gap after climbing onto the window ledge to play. His parents had reportedly gone out to buy groceries, leaving the child at home by himself. 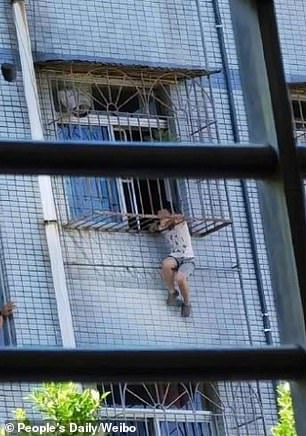 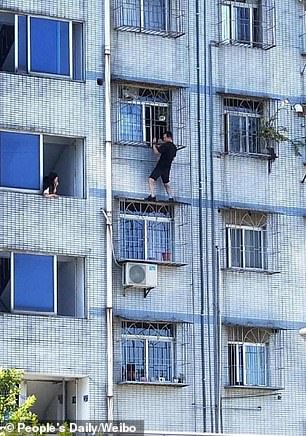 According to reports, the boy fell through the gap after climbing onto the window ledge to play. His parents had reportedly gone out to buy groceries, leaving the child at home alone 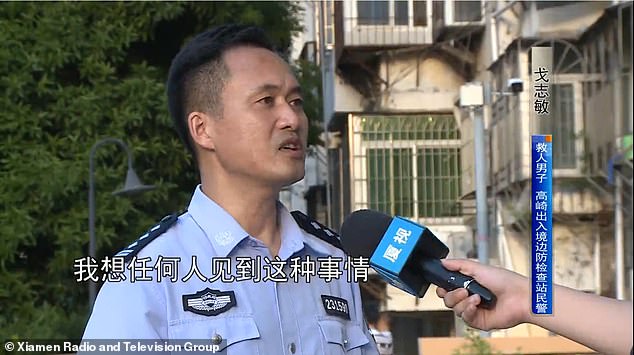 ‘I think anybody would have come forward bravely under such circumstances, let alone a police officer like me,’ the saviour, a 48-year-old retired soldier, told a local TV reporter

The saviour, 48-year-old Ge Zhimin, lives one level above the boy and his family.

On the day, he heard people shouting outside before spotting the child crying and struggling in agony.

The man, a police officer and retired soldier, rushed out of his home and headed towards the five-storey landing.

From there, he climbed out to the building’s exterior wall without any protective equipment, and reached the boy, reported Retired Soldiers Magazine.

Mr Ge told the child not to be afraid while asking other neighbours and his family members to call the police.

He stood on a metal awning to prevent the child from falling.

He initially held up the boy, who weighs around 66 pounds, with his right arm. But the man’s limb soon went numb, so he decided to support the boy with his shoulder. 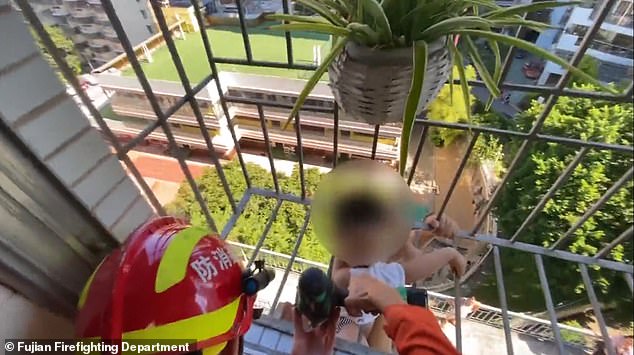 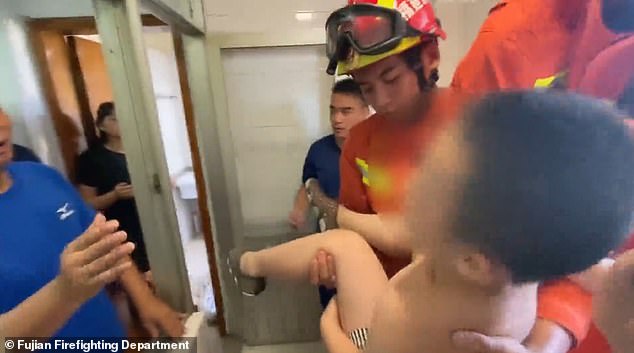 Firefighters arrived around 40 minutes later and broke into the boy’s home.

The officers spent another 20 minutes or so removing a bar from the frame. They lifted the boy back into the flat through the widened gap.

‘If the onlooker hadn’t held up the child, [the boy] could have ended up being stuck by the neck and suffocating,’ Gong Haijun, a supervisor at the Xiamen Fire Brigade, told Xiamen Radio and Television Station.

‘I think anybody would have come forward bravely under such circumstances, let alone a police officer like me,’ he told the station.

It is understood the boy was unhurt in the ordeal.