Indonesians are in the midst of a fierce electoral contest with potentially enormous consequences.President Joko Widodo is a former furniture salesman and local mayor who grew up in a poor family in central Java. He is facing off against Prabowo Subianto, a millionaire businessman, former military general and son-in-law of dictator Suharto. Prabowo's military service was controversial in East Timor, West Papua and during the anti-Suharto riots in Jakarta in 1998.

They are involved in a re-match of Indonesia's most recent national poll in 2014. 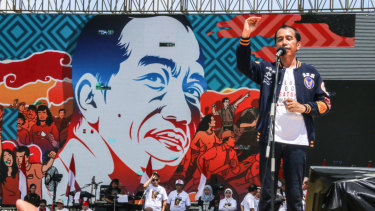 Joko Widodo greeted his supporters while attending the Jogja Unite Indonesian Alumni Declaration at the Kridosono Stadium in March.Credit:Alamy

Joko, known as Jokowi, is the favourite but Prabowo has  strong support too, and has already flagged mass street protests and a constitutional court challenge if he loses the poll – in part, because of what he claims are massive irregularities on the electoral roll. (At the last election, he refused to concede defeat for two weeks despite early voting indicating a clear win for Joko.)

Twenty-one years after the downfall of the dictator Suharto, Indonesia has grown into a fully-fledged democracy – a transition that has largely been successful.

But the country is still wracked by problems old and new, including endemic corruption, inadequate infrastructure and insufficient environmental protections, a huge gulf between the rich few and the poor multitudes and the economy growing at 5 per cent, which is strong but not quite enough to lift large numbers of people out of poverty. 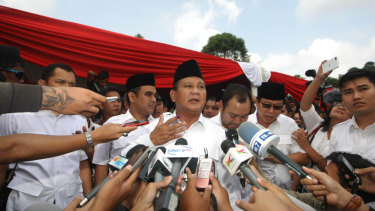 Islam, too, is playing an increasing role in defining political identity and intolerance is on the rise in a nation that has, for decades, prided itself on its commitment to "unity in diversity". Indonesia's government has been largely silent about the introduction of sharia law in Brunei – sharia law is already in place in the conservative, formerly restive province of Aceh – and one of the reasons why some voters are disappointed in Joko is that the president has not, as he had promised to do, championed human rights in his first term in office.

The 2019 poll will help decide what path Indonesia takes over the next five years and beyond.

Why should Australians care?

Lots of reasons. Indonesia is one of our nearest neighbours. It is a key ally in the war on extremism, Islamic terrorism, drug smuggling and people smuggling. It is arguably the leading nation in the ASEAN grouping. Though imperfect, it's a thriving democracy in a region in which human rights and liberal values are in retreat. As Indonesia develops economically – and this is especially so after the signing of a free trade deal with Australia this year  – the economic opportunities presented by a market of 260 million people on our doorstep are staggering.

What exactly are Indonesians voting for?

Both their president and parliament – and the votes are being held on the same date for the first time in the country's history. April 17 is the big day, with polls opening at 7am and closing at 1pm. Voting is not compulsory but election day has been declared a national holiday in a bid to maximise turnout. 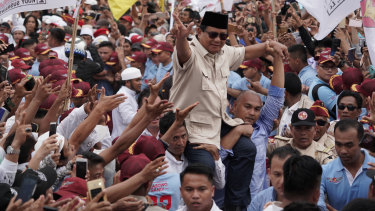 Prabowo greets supporters at a campaign rally in March. Credit:Bloomberg

About 193 million Indonesians are eligible, including 80 million millennials. Members of the military and police don't vote, which is meant to ensure their neutrality, given Indonesia’s history of military-led authoritarian rule, says the Lowy Institute. The mode of voting, using a nail to punch a hole in the ballot paper, is also aimed at making manipulation harder. Votes are counted in public at each of the 800,000 polling booths  – there are more than 6 million election workers.

There are also more than 20,000 local and national seats up for grabs (as well as the presidency) and more than 245,000 candidates running, according to this handy Lowy Institute infographic.  For the national House of Representatives, 575 seats are in play.

What do the presidential candidates stand for?

Joko "Jokowi" Widodo, 57,a former governor of Jakarta, is the incumbent and candidate for the PDI-P (the Indonesian Democratic Party of Struggle) and a coalition of other parties while his opponent, strongman Prabowo Subianto, 67,  leads a coalition of parties including his own Gerindra (Greater Indonesia). 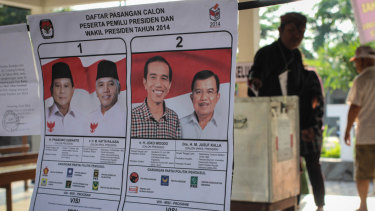 Indonesian people cast their ballot for the Indonesia Presidential elections at a polling station on July 9, 2014.Credit:Alamy

Both make much of their committment to Pancasila, Indonesia's state ideology, which can be summed up as belief in one God, humanity, the unity of Indonesia, democracy and social justice.

Jokowi, as he is widely known, has promised to keep up his huge infrastructure building program, which has seen thousands of kilometres of new highways opened as well as rail, an underground metro rail line in Jakarta, new airports and seaports. He also wants to improve the country's education system, which is chronically under-funded and over-crowded.

Prabowo has promised to crack down on corruption, ensure that more of the money earned from Indonesia's natural resources stays in the country, reduce electricity prices, tackle stunting of children caused by malnourishment, creating more jobs – and to make Indonesia great again (yes, really).

Both men are appealing to conservative Muslim voters for support, though Prabowo more so than Jokowi. 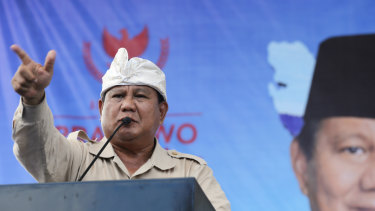 How does each candidate see relations with the region?

Both men stress they want good relations with neighbouring countries. In the most recent presidential debate, Prabowo was sharply critical of the military budget, which he said was inadequate to Indonesia's needs – a point that Jokowi disagreed with, arguing infrastructure investment was more urgent. 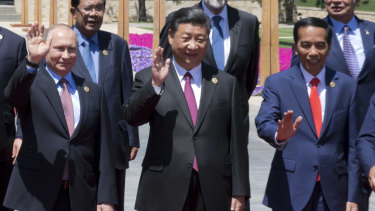 Vladimir Putin, Xi Jinping and Jokowi at the Belt Road Forum in 2017.Credit:AP

Where do they stand on China?

Both men are, broadly speaking, friendly with China if not also a little wary of the giant northern neighbour and trading partner. Although it has been slow to get on board, Joko's administration recently offered China the chance to invest in 28 projects worth $US127.5 billion as part of its region-wide Belt and Road Initiative. Up until now, Indonesia has held back from this huge initiative in a way that nearby neighbours such as Malaysia, for example, has not. Prabowo, for his part, has sugested he could review some BRI projects if elected and has also played the nationalism card in terms of local jobs, asking why Chinese workers have been brought in when Indonesians could do the job.

Where do they stand on relations with Australia?

Tthe Coalition's decision to dump Malcolm Turnbull and switch to Scott Morrison annoyed Jokowi and directly damaged Australian-Indonesia relations. The relationship between the nations seems to be a permanent roller-coaster ride: think of the execution of two members of the Bali Nine, the interception of asylum-seeker boats, Australia attempting to listen in on former president Susilo Bambang Yudhoyono's phone, and the suspension of the live cattle trade.

The warmth between Jokowi and Turnbull was genuine and it helped ground the relationship; Turnbull's ousting, poorly explained, was a genuine setback. Morrison's subsequent decision to consider moving Australia's Israeli embassy effectively poured petrol on an already inflamed situation. The rights of the Palestinian people to have their own homeland unites Indonesians like few other issues, and the Morrison announcement of a possible embassy move infuriated people of all political persuasions in Indonesia as it was seen as direct blow to Palestinian aspirations. 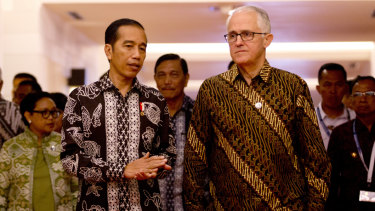 Jokowi and then prime minister Malcolm Turnbull in 2018. Credit:AP

On the positive side, after umpteen delays, the free trade deal between Australia and Indonesia was finally signed this year, though not before Morrison backed away from his embassy plan. Prabowo, for all his nationalist stylings, handled the embassy issue in an orthodox fashion – essentially, he said the location of Australia's embassy was a matter for Australia.

Are there any wildcards here?

Several. Polls can be fickle and misleading in Indonesia. Voting is not compulsory but turnout is generally strong – it hovers between the 70 and 80 per cent mark – and people are generally quite engaged in the contest. This time around, a campaign urging people to "golput" – that is, to not vote in protest at the lack of quality candidates – is under way. This could hurt both candidates, but more so Jokowi – he rode to victory on a wave of popular sentiment last time around, as the first candidate for president not from the political or military elite. The shine has gone off the man some called Indonesia's Obama and if he can't get out the vote, the result will be closer than expected. Mistakes can also happen in campaigns, and knock a candidate with momentum off course.

So who's likely to win?

Jokowi enjoys big leads that stretch to double digits in some polls – though Indonesian polls are not always reliable, and Jokowi had a big lead last time. Prabowo's camp has also recently released polling that it claims shows it will win on April 17.

When will we know?

Quick counts of the poll results will give a clear picture of who has won the presidential election by the end of the night. The Election Commission hopes to have the complete, official count done within five days.

What will be the fallout for Australia?

Ultimately, victory for either Prabowo or Jokowi will not be "good" or "bad" for Australia. It's far more complex than that. What matters, in this election, is the manner of the victory – and what happens afterwards.

If one or other candidate relies too heavily on the conservative, Islamist elements within their coalition to secure the win, this will exacerbate and accelerate the trend away from Indonesia being a tolerant, pluralistic society. Prabowo, in particular – though he is not a particularly observant Muslim himself – could find himself indebted to the conservative forces that helped elect him, and 'owe' them legislative favours.

However, if one or other candidate secures a sizeable victory, it is to be hoped that he will push back against the illberal forces that are in the ascendancy in Indonesia at present.

Our explainers bring you up to date with the issues and people in the news. If you'd like an issue explained – including in the lead-up to our own federal election or on events happening around the world – drop our explainer editor a line at explainers@smh.com.au or explainers@theage.com.au