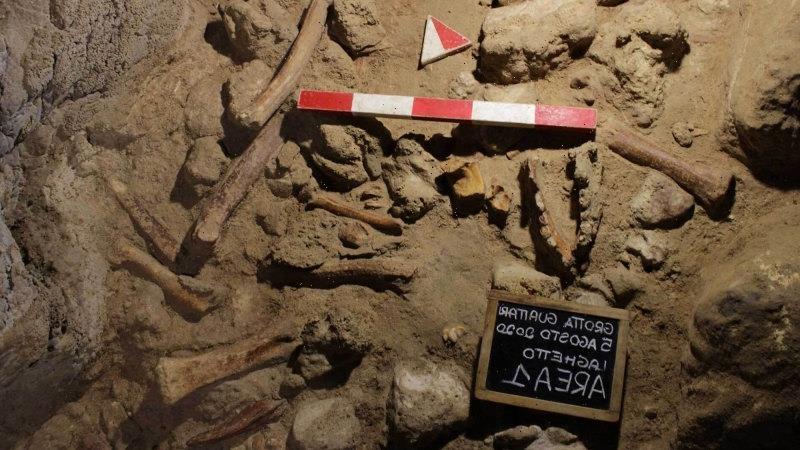 Rome: The discovery of a prehistoric human skull in a cave in Italy has disproved macabre theories that Neanderthals indulged in ritual cannibalism – instead pointing to the prospect that they were eaten by giant hyenas.

The skull was one of thousands of fossilised bones and bone fragments found in the large cave near the village of San Felice Circeo, on the Tyrrhenian coast about half-way between Rome and Naples.

The skull has a hole at its base, leading archaeologists to suggest that it was the work of hyenas, gnawing at the bone to get at the brains inside.

They say they cannot be sure whether the hyenas tracked and killed the Neanderthals, dragging them into the cave, or whether they were scavenging on people who had already died inside the cave of some other cause. 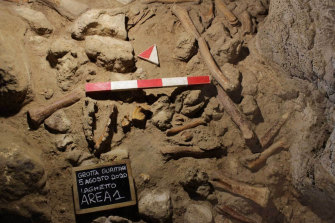 The fossilised bones were found in the Guattari Cave in San Felice Circeo, between Rome and Naples.Credit:Italian Culture Ministry

Back in 1939, a similar Neanderthal skull was found with a hole punched in it. At the time, palaeontologists speculated that the wound had been made by other Neanderthals, suggesting that it was evidence of ritual cannibalism.

That thesis has now been dismissed by the latest discoveries in the cave, with the finger of blame pointed clearly at roving packs of prehistoric cave hyenas, bone-crunching carnivores which were bigger and stronger than their modern counterparts, weighing more than 90 kilograms.

“It could be that hyenas opened up the hole [in the cranium] and then fed on the insides, or it could be that the injury happened by chance,” said Mario Rubini, the local director of anthropology. 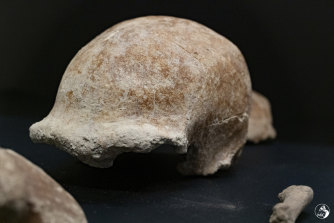 A fossilised skull found in the cave on the coast south of Rome.Credit:Italian Culture Ministry

It was not just Neanderthals that the hyenas were feeding on. Experts said many of the bones belonging to elephants, rhinos, giant deer, cave bears, wild horses and aurochs “show clear signs of gnawing.”

Hyenas would have “dragged their prey to their dens, using the cave as a food cache,” experts said.

The discovery, made by archaeologists from the region of Lazio and from the University of Tor Vergata in Rome, confirms the cave “as one of the most important sites in the world for the history of Neanderthals,” Italy’s culture ministry said in a statement.

Dario Franceschini, the culture minister, hailed it as “an extraordinary discovery which will excite interest in the whole world”.

The remains of nine Neanderthals were found, eight of which were dated to 50,000-68,000 years ago, while the oldest was dated to around 100,000 years ago. One was a female while the rest were males. 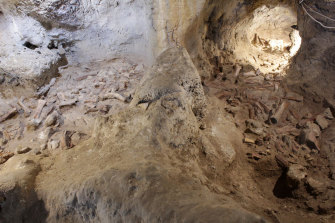 The fossil discoveries, in a cave near Rome, were hailed as ‘extraordinary’ by Italy’s culture minister.Credit:Italian Culture Ministry

The Guattari Cave unyielded an extraordinary hoard of fossilised bones, not just of Neanderthals but of the hyenas that were eating them, as well as rhinoceroses, elephants, aurochs – giant cattle that were driven to extinction a few hundred years ago – and Megaloceros, a species of giant deer sometimes as the Irish elk.

Francesco Di Mario, the head of the dig, said: “They are all adult individuals, except for one who may have been in his early teens.”

He said the fact that the remains of nine Neanderthals had been found, as well as two others in 1939, suggested that the species’ population would have been quite large in the area. 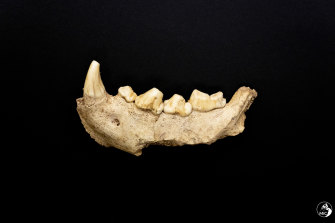 Among the finds from the cave was this fossilised jaw.Credit:Italian Culture Ministry

Neanderthals, the closest ancient relatives of humans, flourished for about 250,000 years but died out about 40,000 years ago.

It is unclear what killed them off, with theories ranging from an inability to adapt to climate change to competition from Homo sapiens.

The cave was discovered in February 1939 – it had been sealed by an ancient landslide, preserving evidence of the world as it was 50,000 years ago.

The presence of so many fossils “makes the cave an exceptional data bank” for life in prehistoric times, the culture ministry said.

This latest dig began in October 2019 and explored a part of the cave known as the “laghetto” or lake which floods in winter.

Recent research has indicated that far from being the hulking, heavy-browed brutes of popular imagination, Neanderthals were sophisticated and intelligent.

There is new evidence to suggest that they dabbled in cave painting, wore ornaments such as eagle claws and used tools made from bone to make clothing from animal skins.

The discovery last month of a piece of 50,000-year-old string in a cave in France also helped confound the idea that Neanderthals were cognitively inferior to Homo sapiens.

It is now generally accepted that Neanderthals were able to use and control fire and that they buried their dead in graves.