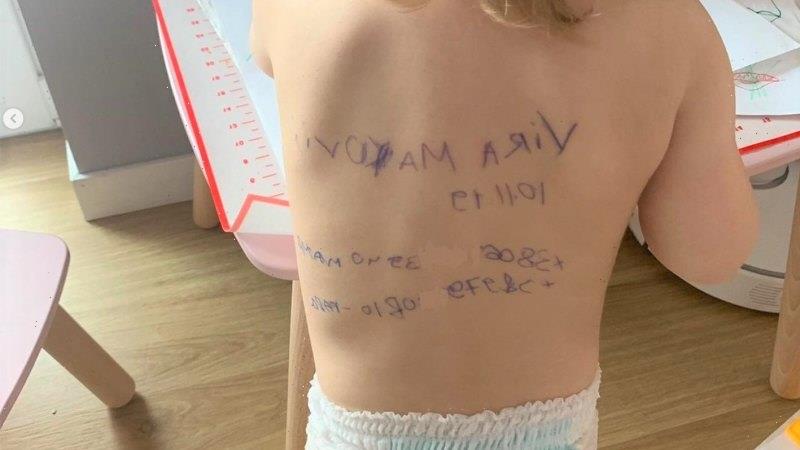 The mother’s hands were shaking when she started writing on her two-year-old’s body. They trembled so much that she couldn’t write correctly on her first try, even though the information was second nature: her daughter’s name, Vira, along with her birthdate and their family phone numbers.

“I thought that if my husband and I died, Vira could find who she is,” the mother, Aleksandra Makoviy, recalled.

For Vira, standing in a nappy in their house in Kyiv, the writing on her back was a game. She didn’t know that the bombing had begun.

Makoviy’s desperate attempt to prepare her daughter for the possibility of being orphaned as the family attempted to escape the Ukrainian capital during the Russian invasion has become a wrenching symbol of the anguish of a nation of parents.

A photo of Vira’s back that Makoviy shared on Instagram has been seen hundreds of thousands of times, after it was amplified by Ukrainian journalists and government officials. Messages of support poured in from people all over the world — many Ukrainian parents said they had taken similar action, and others turned the image into art honouring the country’s innocent on social media.

President Volodymyr Zelensky made a direct reference to efforts like Makoviy’s in a speech to the Spanish Parliament last week.

“Just imagine this: mothers in Ukraine write on the backs of their young children,” he said, adding that Russia was destroying “any basis of normal life”. 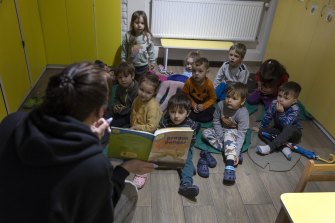 Julia Palovskaya reads to children during an air raid drill in a preschool’s bomb shelter in Lviv, Ukraine,Credit:Getty Images

The photo’s wide reach has led some people, particularly on Twitter, to accuse Makoviy of staging the moment. But she said she shared the photo because she wanted her small audience at the time to feel the “madness” Ukrainian parents were enduring.

The start of Russia’s invasion on February 24 left Makoviy in shock. She described going about the family’s daily routine in a dreamlike state, and recalled trying to play with Vira with the sound of bombs in the distance.

But Makoviy, a 33-year-old painter who was born and raised in Kyiv, was also aware that the man-made island they lived on along the Dnipro River had no underground shelter, she said. Visions of the horrors that Russian forces unleashed on the Syrian city of Aleppo flashed in her mind.

The family packed their car and drove out of the capital at night. 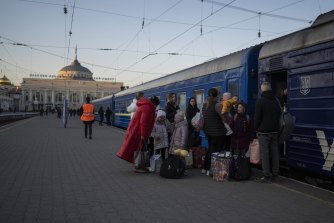 People embark on a train in Odesa. More than 4 million people have left Ukraine during the war.Credit:AP

Before they left, Makoviy scrawled Vira’s information on her back. Vira’s age and inability to understand the situation were a blessing, Makoviy said. The child inherited a love of art — she liked to draw on her own body — and had no idea of the gravity of what her mother inscribed on her.

Still, Makoviy was brought to tears on the drive west by her daughter’s repeated pleas to go home and to see her grandmother, who had given her the teddy bear they brought along and didn’t escape Ukraine until later.

Makoviy, who could not sleep or keep food down until they crossed the border into Moldova, did not want to lie. “We can’t go home now,” she told her daughter.

The family eventually arrived in a village in the south of France, where they have found refuge. Speaking by phone, Makoviy said she thought that if the worst had happened, Vira might at least be able to look back at her mother’s Instagram, full of everyday moments from their life before the war, and see that she had been surrounded with love.

After their journey, Vira has physical reminders of that love as well — several volunteers on their route gifted her teddy bears. Along with the bear from her grandmother, who is travelling from Poland to reunite with her, she has amassed a small collection.