A dog which was cruelly abandoned outside an animal centre appears to have been lost in translation – as the pooch only understands German.

The American bulldog named Hector was found tied to the gates of an RSPCA centre  in Leeds with cigarette burns on his body on August 1.

CCTV footage showed a black Mercedes with foreign number plates pulling up outside the centre.

The driver is seen getting out and going to the rear of the car to get the dog before tying him up.

Unfortunately, as the mutt wasn’t microchipped there is no way for the RSPCA officers to track down the owner, but staff are hoping they may have uncovered a big clue. 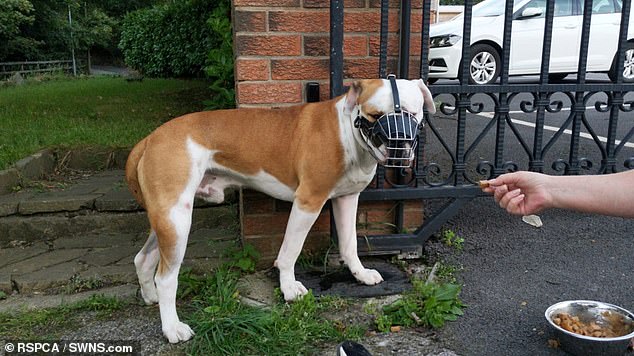 An American bulldog named Hector was found tied to the gates of an RSPCA centre with cigarette burns on his body on August 1 (pictured). He was left by a mystery man driving a Mercedes with foreign number plates

Animal Care Manager Lucynda Hodgson said: ‘He really shut down after what must have been a terrifying ordeal for him but after a few days of getting used to the staff he is doing a lot better and seems much happier.

‘Initially he wasn’t responding to any English words so – given the foreign plates on the car – we tried some other options and it emerged he was actually very well trained, in German.

‘He’s a quick learner and even after just a few days is already picking up English.’

Once Hector calmed down, staff at the RSPCA Leeds, Wakefield & District Branch Animal Centre were able to remove his muzzle and get a look at him.

Hector is described as a tan and white un-neutered male. He was in good body condition, with what looked to be freshly cut nails.

But he had some burns on his body which are thought to be from cigarettes, one of which looks fairly recent.

Lucynda Hodgson said: ‘We had to call for an inspector to come and help as the dog was being rather aggressive and although he was wearing a pretty hefty muzzle the staff were struggling to get near him. 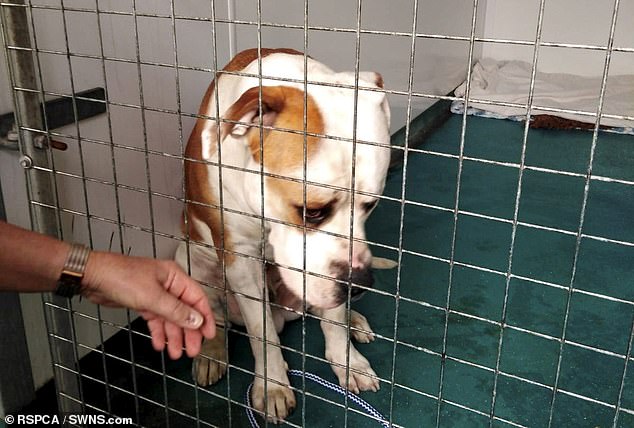 Carers at the RSPCA in Leeds said that initially, Hector didn’t understand English, but they had more luck when they tried speaking German to him. He is already ‘picking up English’ they said

‘It took two of our animal care assistants and the officer to free him and get him up to our kennels.’

Anyone with any information about who Hector belongs is being urged to call the RSPCA inspector appeal line on 0300 123 8018 and ask to leave a message for inspector Emily Stodart, who is investigating what happened.

Emily said: ‘Poor Hector was very distressed when he was found.

‘We would like to find out how Hector came to have these injuries and who abandoned him in this way. If you can help us to locate his owner please call me.’

Katherine Heigl was one of the original cast members of the popular television series Grey’s Anatomy. She stayed with the medical-based drama until...