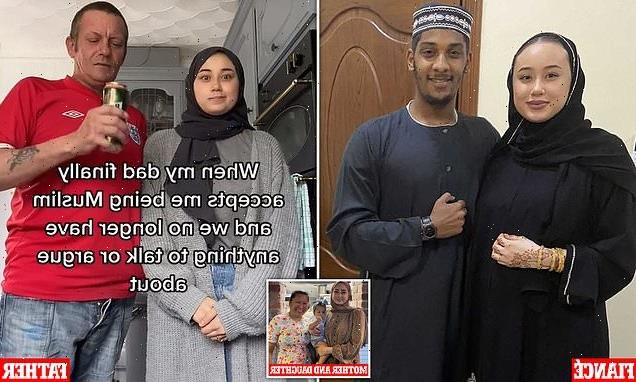 Muslim daughter, 19, and her beer and bacon-loving father, 52, who fell out when she converted to Islam have now amassed 50,000 TikTok followers by poking fun at their relationship

A beer-swilling father who fell out with his teenage daughter when she converted to Islam now pokes fun at their unusual relationship on TikTok – to show ‘people can change their views at any age’.

Leena Brookes, from Sheffield, South Yorks, became a Muslim when she was just 13 despite having gone to a Church of England primary school and clashed with him and her Thai mother as a result.

Father Stuart Brookes was adamantly against his daughter’s decision and didn’t speak to her for several years, fearing she had been brainwashed into the decision after reading about ISIS and grooming gangs in the news.

However the demolition worker, 52, soon learned that changing her religion hadn’t changed Leena and after getting to know her husband-to-be Jamal Eldeen Saeed’s family too, he accepted her decision.

Leena, 19, now has a much closer relationship with him and the duo make amusing videos poking fun at their differences to share on to their near-50,000 TikTok followers, racking up millions of views.

Clips feature Stuart enjoying his ‘morning bacon’ or ‘afternoon beer’ while Leena wears her headscarf or even both stood in awkward silence as they note they now have nothing to argue about anymore.

Stuart even says he has learned lots himself from his daughter’s religion and he hopes that sharing the videos shows others that you are never too old to change your views.

Leena said: ‘It’s something we laugh at now – hence the TikToks. People look at my dad and think he looks like a stereotypical English guy. 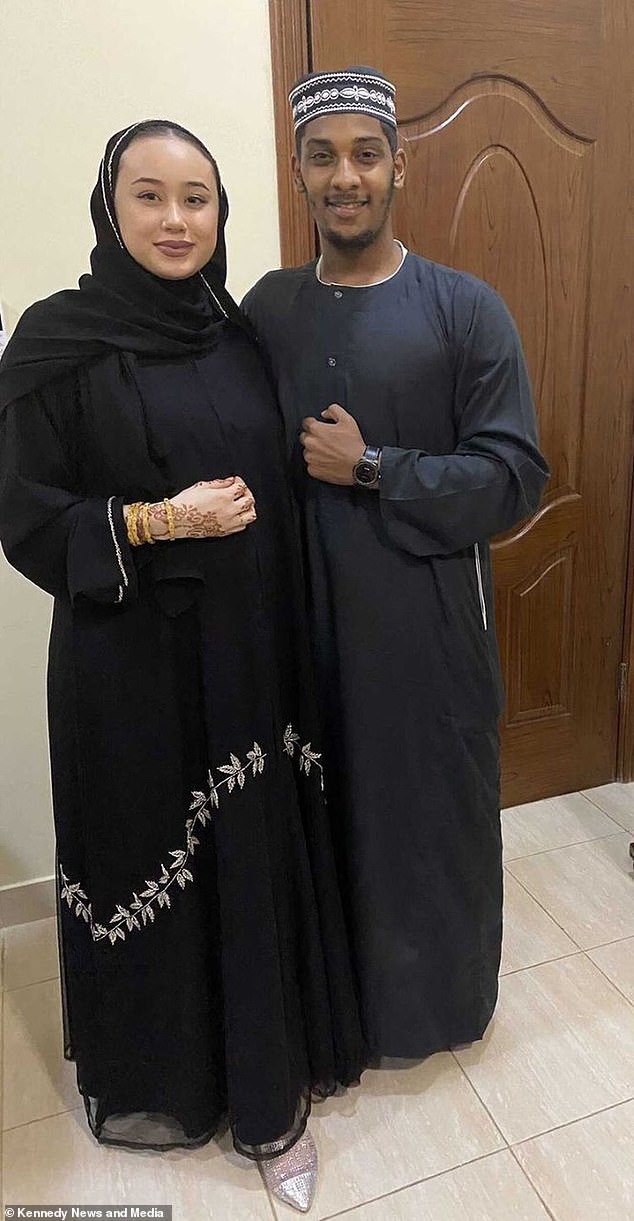 Leena Brookes, 19, with her husband Jamal Eldeen Saeed, 21, are both Muslim believers 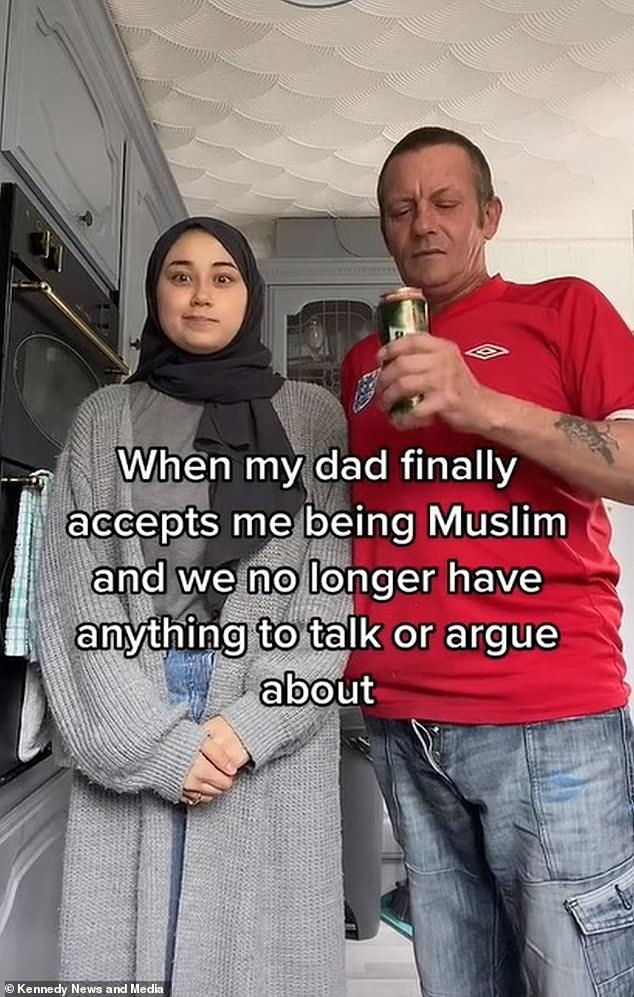 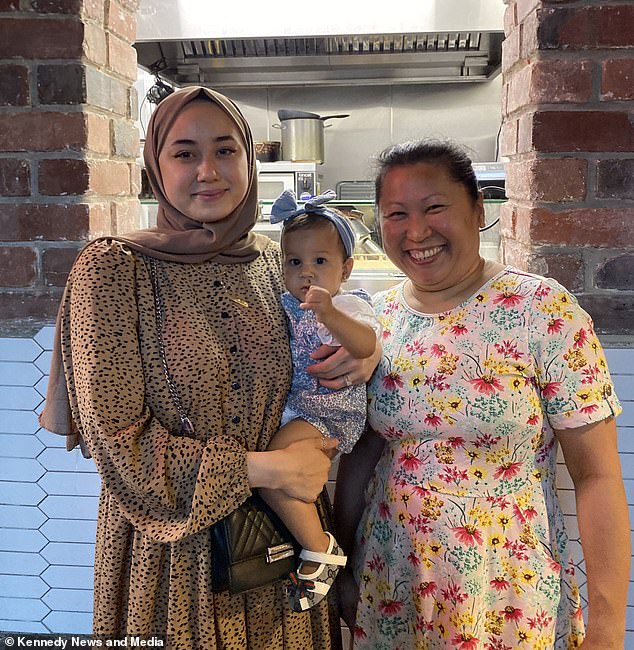 ‘I always joke with my family about our weird situation and that carried over onto TikTok. From that, I noticed a lot of converts to Islam reaching out to me.

‘So I figured I would post some funny stuff with my dad to show other people that things can get better.

‘A lot of people who reach out to me have very similar family situations, and I remember when I was going through it, it felt like it’d be that way forever.

‘I wanted to show them that these family relationships can get better.

‘On TikTok, I do get some troll comments. Not so much about Islam, it’s mainly about my dad.

‘They’ll say I’m trying to brainwash my dad into being a Muslim, that I don’t agree with him being white, all sorts of weird stuff.

‘I don’t think twice about it, but my dad can sit there reading the comments for hours. I always tell him that he shouldn’t pay any notice.’

Leena’s father Stuart has come to see that Leena’s newfound faith has been a good thing for her and believes he has learned from her being a Muslim. 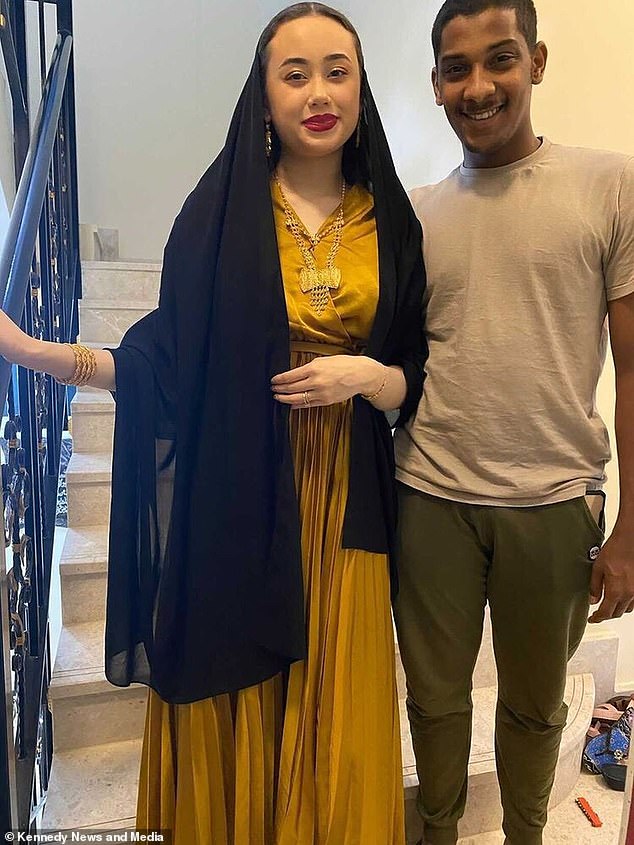 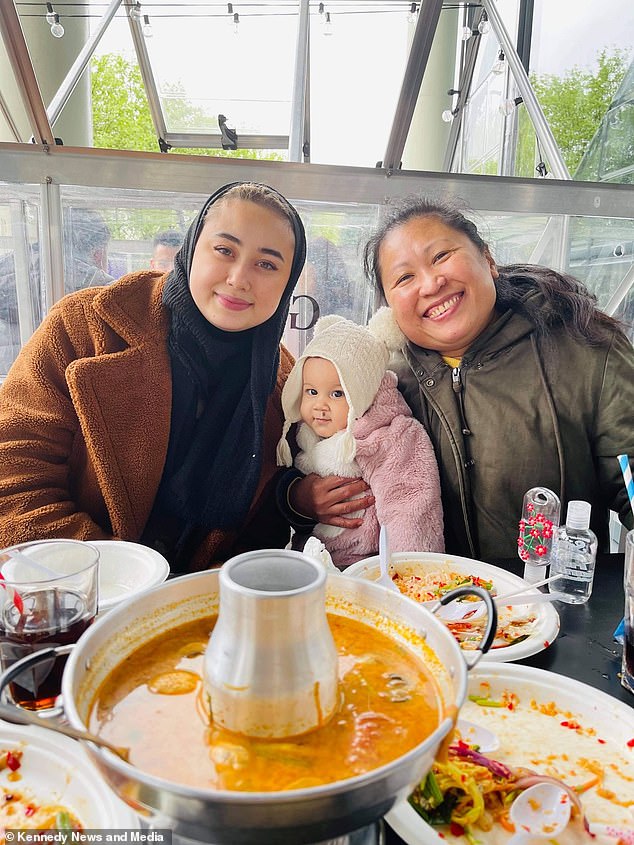 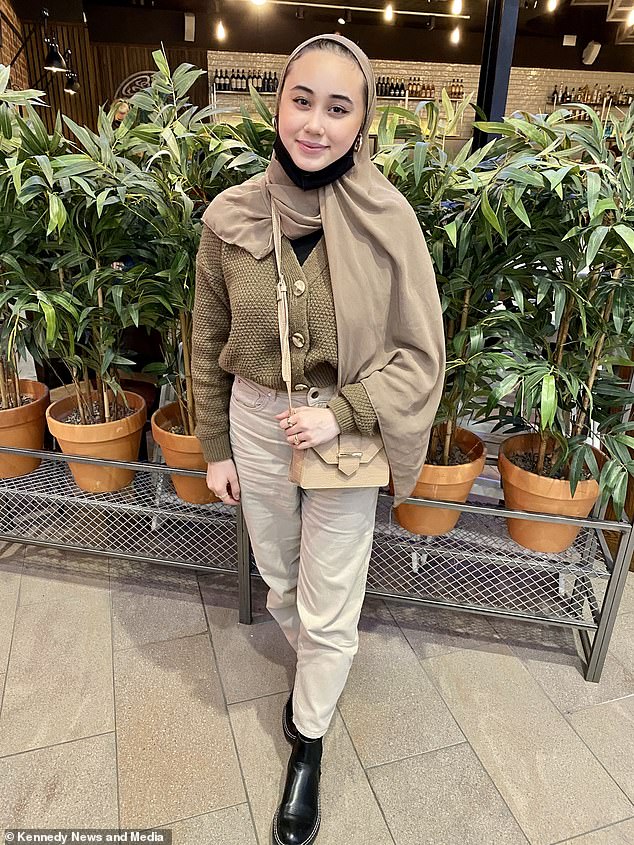 Leena Brookes, from Sheffield, South Yorkshire, became a Muslim when she was just 13

Stuart said: ‘I am very proud of my daughter as I think she could be doing much worse things at her age; she is an amazing mum and I feel this religion has taught not only her but me a lot.

‘It has been a blessing in disguise and has brought me my beautiful granddaughter and an amazing relationship with my daughter.

‘In the beginning a lot of her TikToks were posted without me knowing. However, it has shown others how even at my age people can change their views.’

For Leena, who was raised by an English dad and a Thai mum, converting to Islam wasn’t something that she had anticipated would happen to her.

Leena said: ‘When I was younger, I went to a predominantly white Church of England school.

‘Because my mum’s Thai and my dad’s English, I got quite a bit of bullying growing up for not being full English.

‘But my area was full of Muslims. My best friend growing up was Muslim, so going to school always made me feel out of place.

‘By the time I got to secondary school, I was in a multicultural environment. Islam really started to intrigue me, as all of my friends were Muslim.

‘That led to me asking questions about why they couldn’t eat pork, why they prayed five times a day, and my friends explained it to me.

‘As more and more of the religion was explained to me, I fell in love with it.

‘It was a gradual process. I was studying it for about two years before I actually converted.

‘My mum said that when I’d always come asking her if she believes in God, so she wasn’t too surprised when I became Muslim.

‘Up until my conversion, my mum knew I was learning about Islam, fasting and visiting mosques.

‘I was doing everything a Muslim clearly does. But as soon as I told her I wanted to change my religion, she wasn’t happy about it.

‘She wasn’t happy because there was a lot in the news at the time about girls joining ISIS or grooming gangs, so all of this was in her mind.

‘She just couldn’t grasp why I, as a young girl, would become Muslim when it’s viewed as really restrictive.

‘For the longest time, me and my dad didn’t speak very much. Even when my mum came around to accepting it, she said to me ‘Don’t tell your dad’.

‘My dad found out about a year later, when I was 14, when he offered me a sip of alcohol. When I said no, he questioned why.

‘He was saying ‘Why not? When I was your age, I was drinking at the park with my friends’. I accidentally said, ‘Muslims don’t do that’ and nearly outed myself.

‘Then afterwards, my family would see me on social media wearing my headscarf and tell my dad. It’s at that point he put it all together.

‘His first initial reaction was that he didn’t want to speak to me ever again. He thought I was being brainwashed.

‘It took him a really long time for him to come around. When I was 17 going on 18, he started speaking to me.

‘In those years in between, I’d be sending gifts along with my brother when he went to visit. I think I’d demonstrated that being Muslim hadn’t changed me from being his daughter.

‘He wasn’t accepting, he was tolerating it. Then, when I decided I wanted to get married, he had to make a decision about whether he was going to allow me to get married.

‘My dad got to know my husband’s family too and realised that Muslims aren’t how he initially perceived though.’