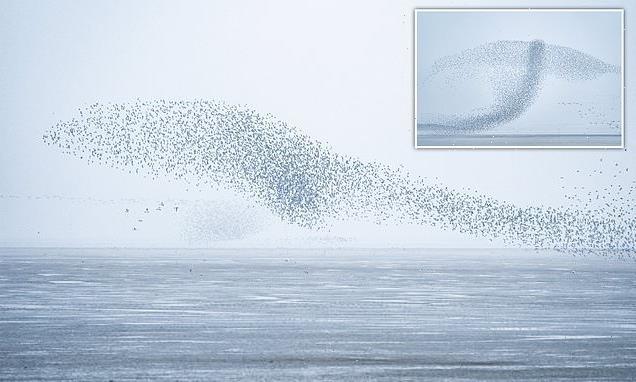 Is it a bird…or a whale? Murmuration of waders dazzles autumn walkers as they form the shape of a whale fin over misty beach

This is the amazing moment a ‘murmuration’ of waders dazzled beachgoers on a misty autumn morning as they formed the shape which some have described as a giant bird shape but others has said resembled a whale’s fin.

Thousands of knots created the uncanny shape as they played games of charades in the sky.

Spectators were dazzled as the acrobatic animals flocked from their mudflat nests to avoid the approaching high tide in Snettisham, Norfolk.

Among the spectators was photographer Brad Damms, 37, who captured the stunning performance on camera. 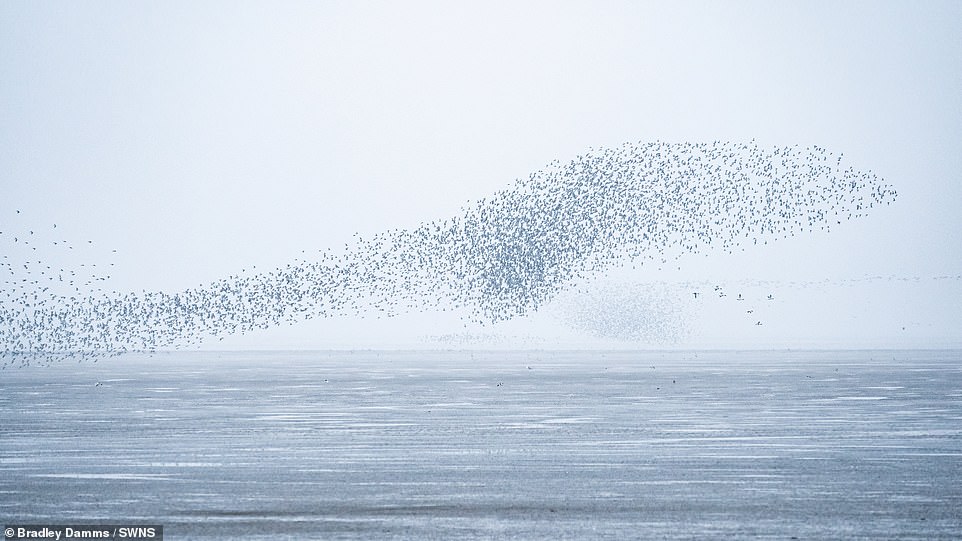 In the eyecatching scenes, the knots formed many shapes including one that resembled a jumping whale coming out of the sea 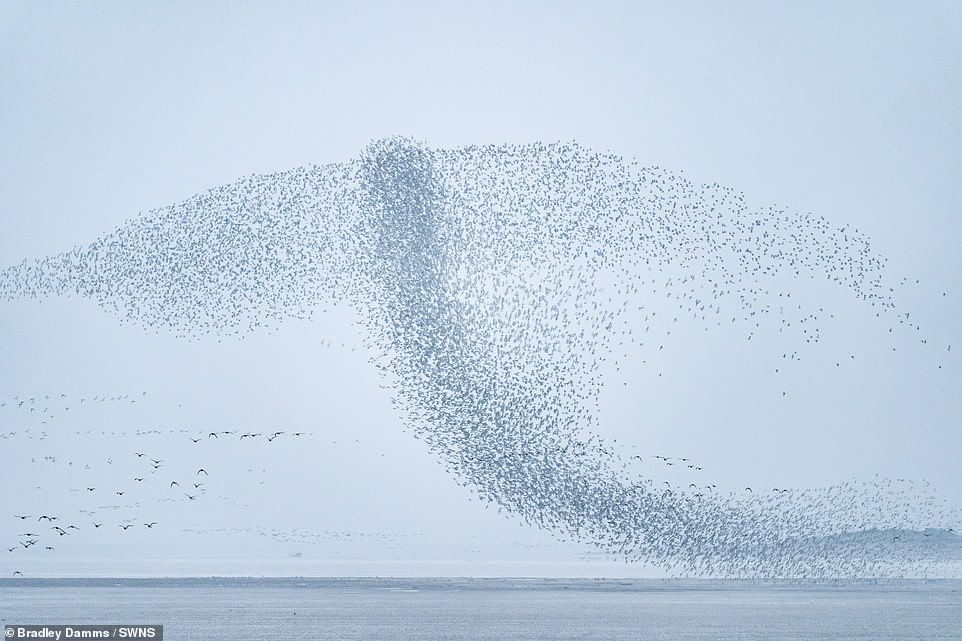 The flock also did their best impression of a larger bird swooping through the air as part of their murmuration in Snettisham, Norfolk 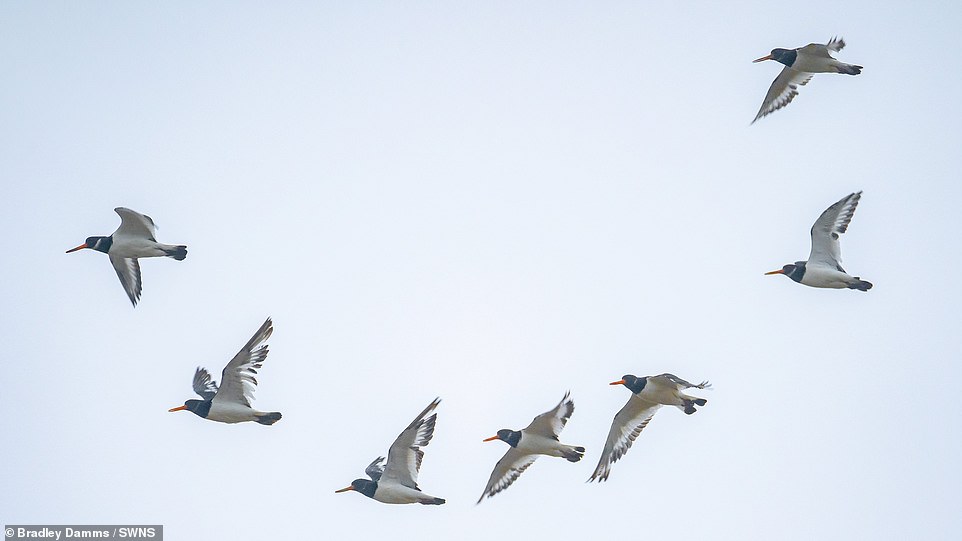 The small birds mimic each other which creates a ripple effect among the flock and keeps them together in one large shape. 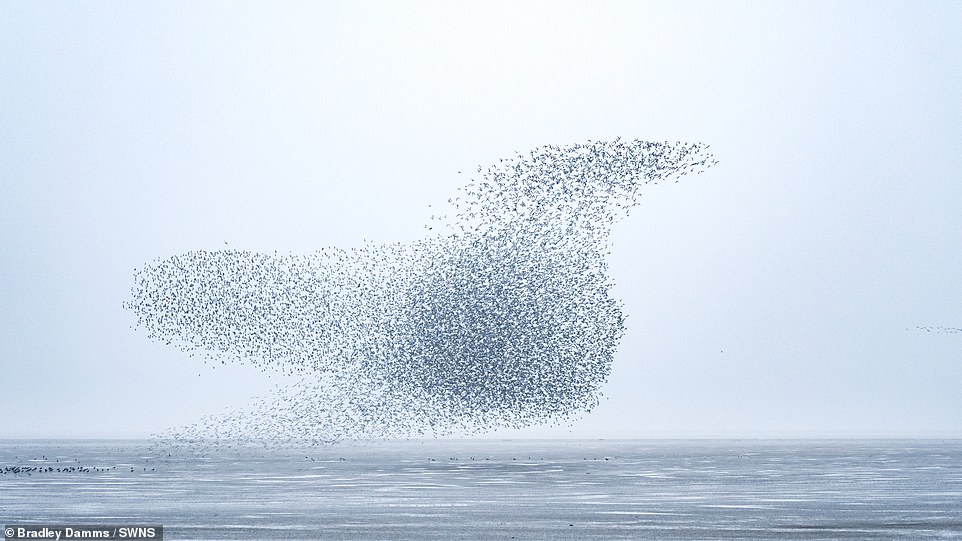 ‘The great thing is that everyone sees something different.’

Brad, from Holt, Norfolk, said: ‘The knots nest and feed on the mudflats of the beach. Eventually, the water comes up and they to take to the air.

‘When they take off in one big go it sounds like a steam train going past.

‘They put on a little show and then fly in and land.’

The knot is a short-legged, stocky wading bird which forms huge flocks in winter after in the UK from their Arctic breeding grounds.

Knots commonly visit estuaries along UK coasts between August and May.

The wading birds are classified as Near Threatened on the International Union for Conservation of Nature database of endangered species. 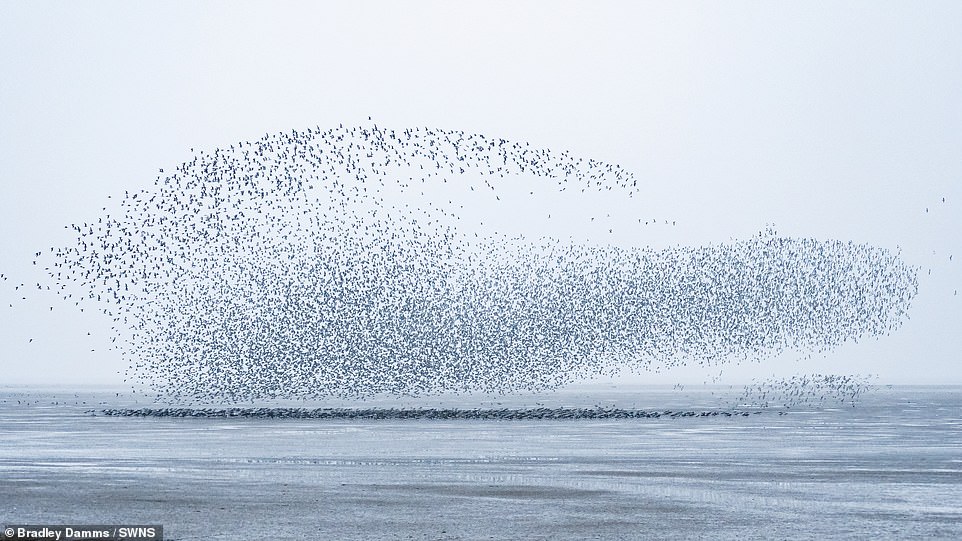 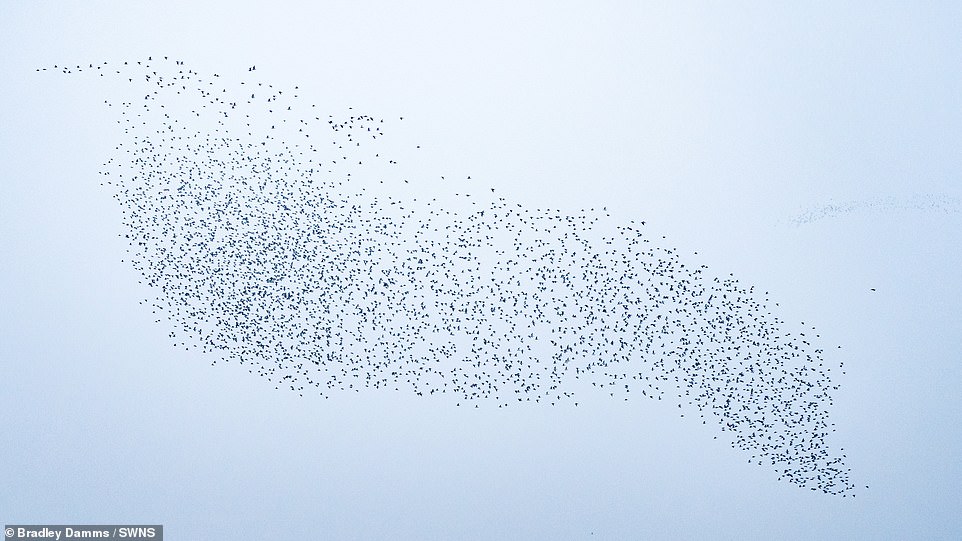 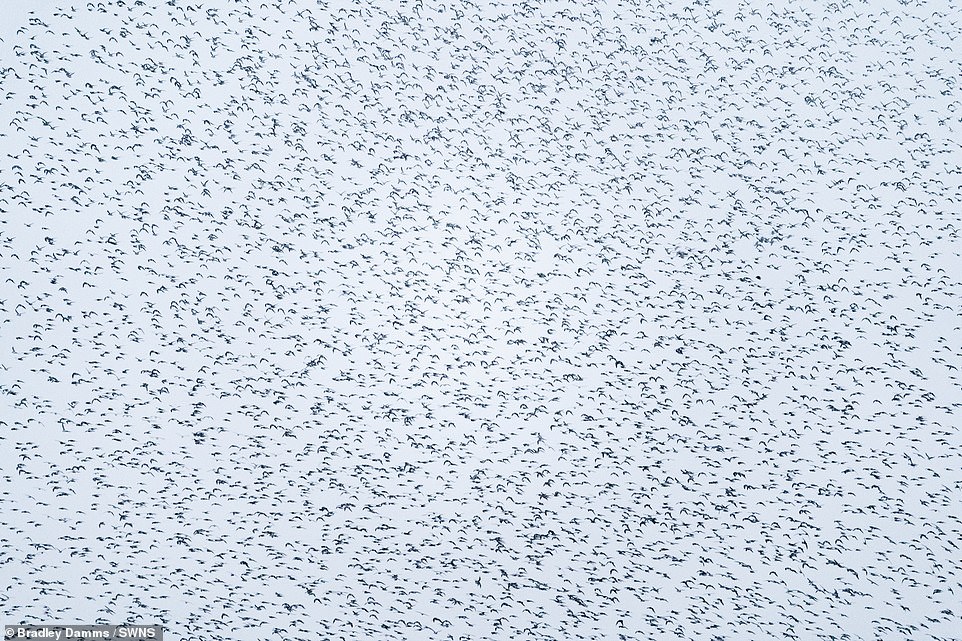 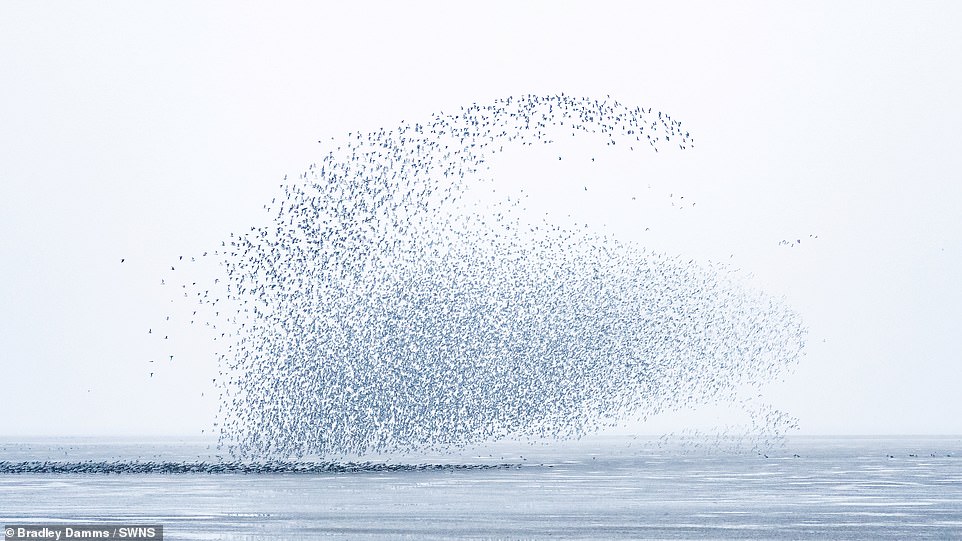 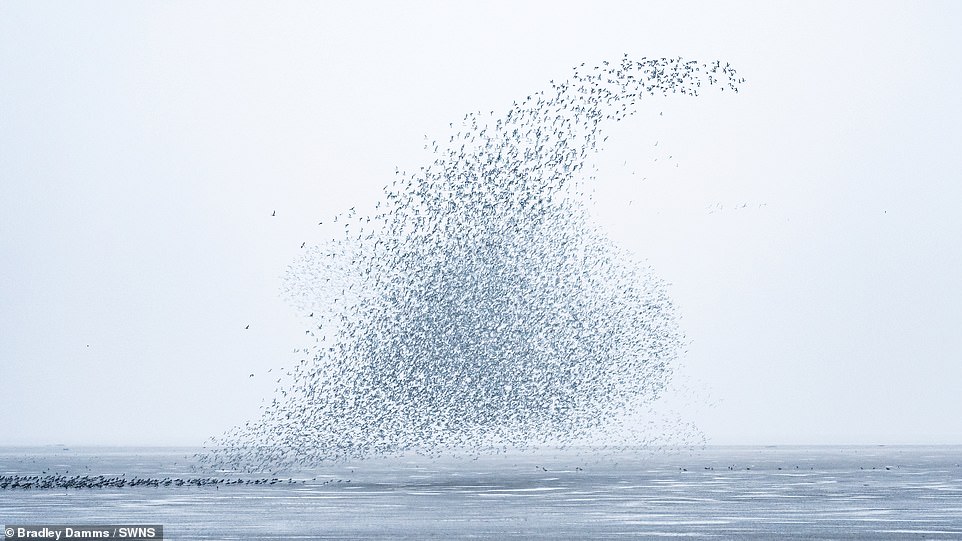 THE MYSTERY OF MURMURATIONS

Mumurations are little understood by ornithologists but it has been suggest that it may be a survival technique in order to scare predators.

The birds mimic each other which creates a ripple effect among the flock and keeps them together in one large shape.

In 2014, a research team from Warwick discovered that it is the areas of light and dark in the flocks that allows starlings to fly so close together.

The pattern of light and dark, formed as the birds attempt to achieve the necessary density, is what provides vital information to individual birds within the flock.

From a distance they appear black, but close-up they are very glossy with a sheen of purples and greens. 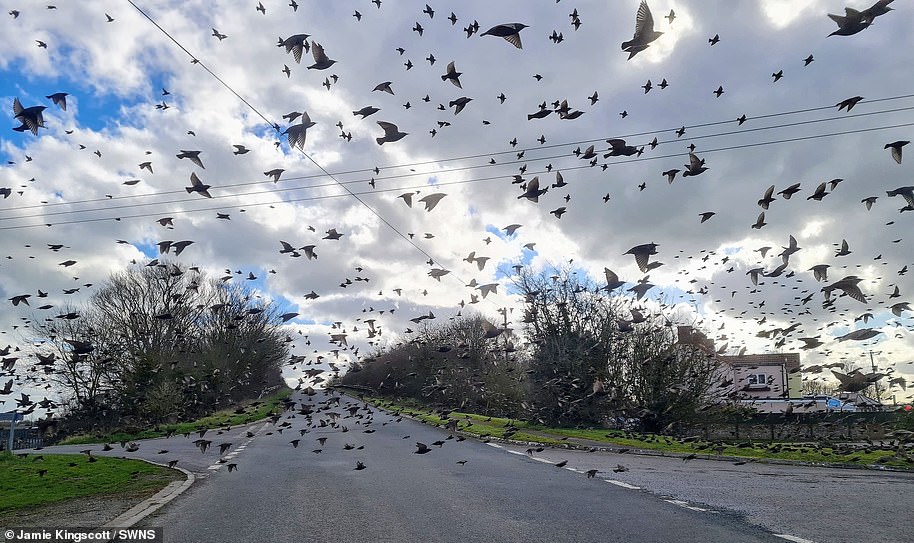