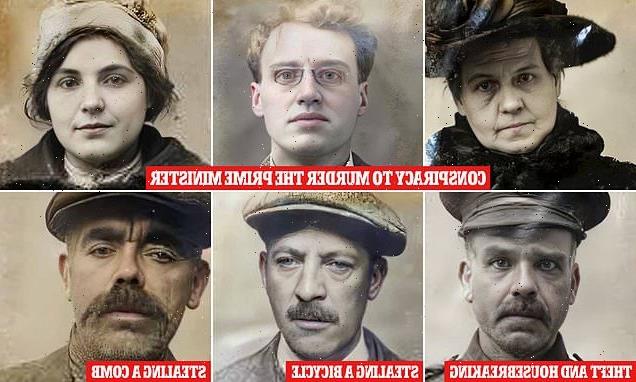 From plot to kill PM David Lloyd George to stealing a comb: Fascinating mugshots of Victorian criminals are found inside ancient police ledger that was rescued from a skip

An album featuring a collection of haunting criminal mugshots from the Victorian era and beyond is set to fetch thousands at auction after being rescued from a skip.

The Peaky Blinders-style images were discovered inside a police ledger dating from between 1890 to 1920.

The document mentions Alice Wheeldon, a woman convicted of plotting to kill the then British Prime Minister David Lloyd George more than a century ago.

Overall, there are 500 pages and every one features a grainy mug shot and details of crimes ranging from theft, burglary, shoplifting and assault.

Lesser offences include petty theft such as stealing a comb, bad language or even being an ‘incorrigible rogue’.

The fascinating document of ‘serious importance’ was rescued from a skip by a former police officer working in Derby over 40 years ago.

His son is now selling the book via Hansons Auctioneers where it is expected to fetch between £2,000-£3,000 on October 19. 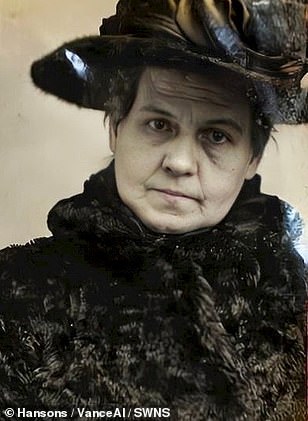 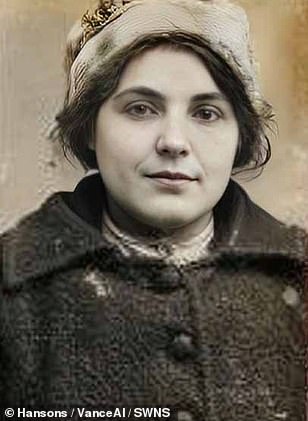 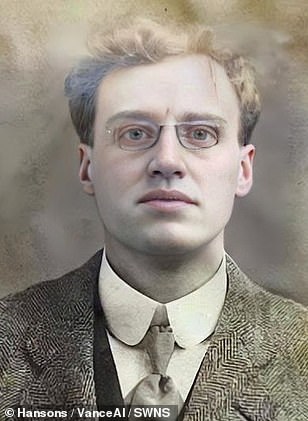 A police ledger dating from between 1890 to 1920 that features a collection of haunting criminal mugshots from the Victorian era and beyond is set to fetch thousands at auction after being rescued from a skip. Above: Alice Wheeldon, her daughter Winnie, and son-in-law Alfred Mason, who were all convicted in 1917 of conspiring to murder the then Prime Minister David Lloyd George. The mugshots are enhanced versions of those that appear in the original ledger files

The crooks include many from Derby but also men and women from all over the country – including Southampton, Hull, Birmingham, Leicester and Nottinghamshire. 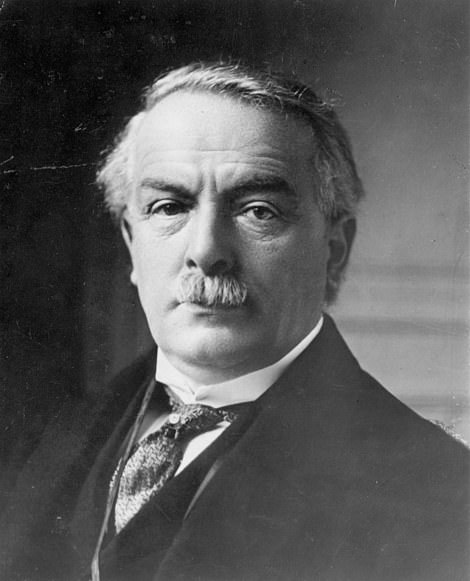 David Lloyd George was Prime Minister from 1916 until 1922

The ledger’s most notables pages relate to the Wheeldon family – who were charged and convicted with conspiracy to murder Lloyd George.

Alice Wheeldon, her daughter Winnie and son-in-law Alfred Mason were all believed to have been wrongfully convicted of the plot in March 1917.

Lloyd George was then just three months into a six-year stint as Prime Minister that came to an end in 1922.

The seller, a 53-year-old engineer from Staffordshire who has lived in Derby for 47 years, said: ‘The book was rescued by my father, a police officer at the time, when he was working for Derby Borough Police more than 40 years ago.

‘The station was clearing out some garages and store rooms at an old police station on St Mary’s Gate in Derby. My father rescued it from being thrown into the skip.

‘He thought it was too interesting to end up in landfill. Unfortunately, my dad is no longer with us, so I can’t ask him for more details.

‘He passed it to me 30 years ago. It’s been sitting in a cupboard ever since and rarely sees the light of day.

‘I looked at it in more detail 10 years ago and noticed the Wheeldon family.

‘In Derby Alice Weeldon is now viewed as a hero for her anti-war and suffragette stance and wrongful conviction. 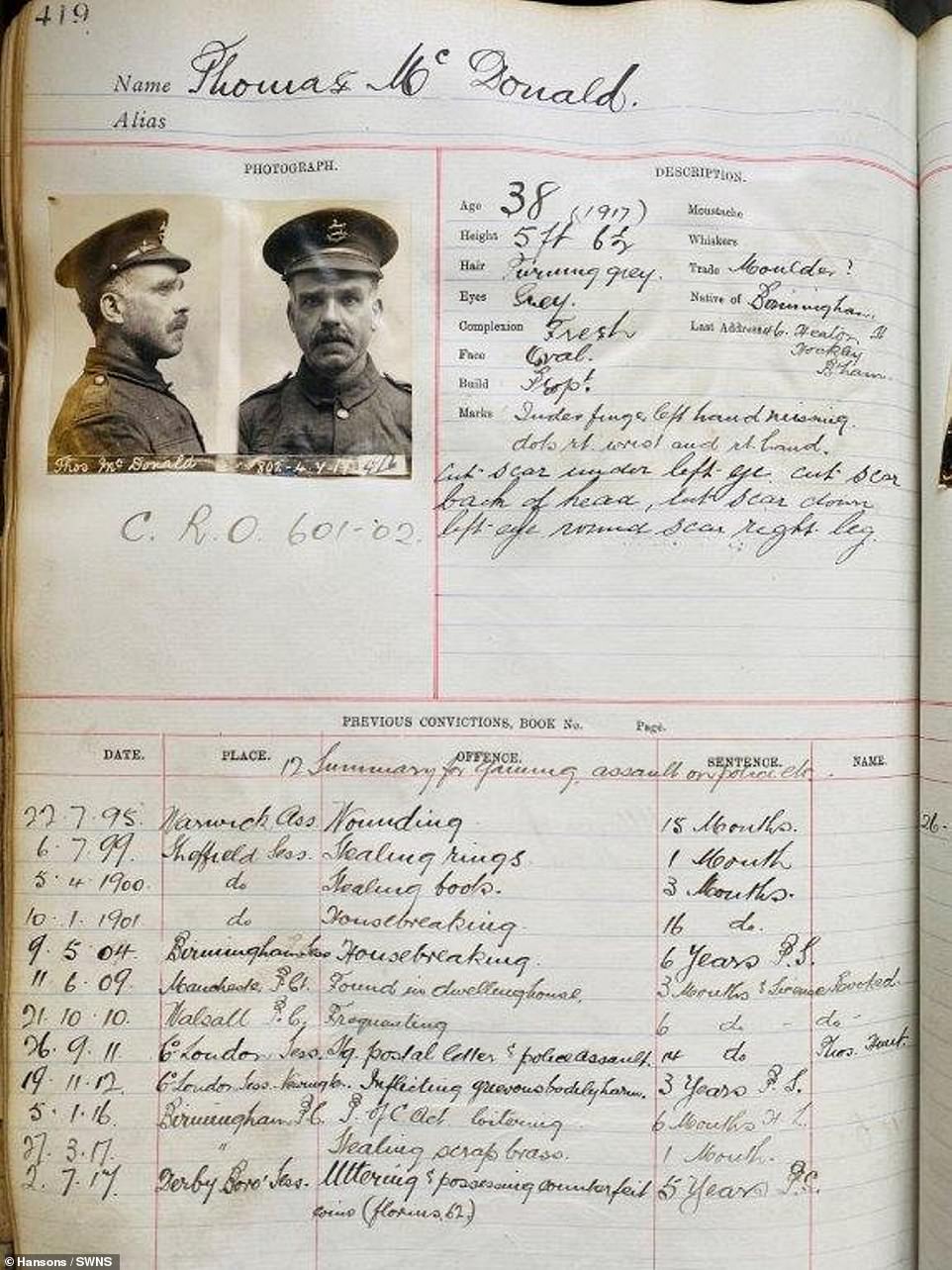 The crooks include many from Derby but also men and women from all over the country – including Southampton, Hull, Birmingham, Leicester and Nottinghamshire. Above: Thomas Donald of Birmingham arrested for theft and housebreaking 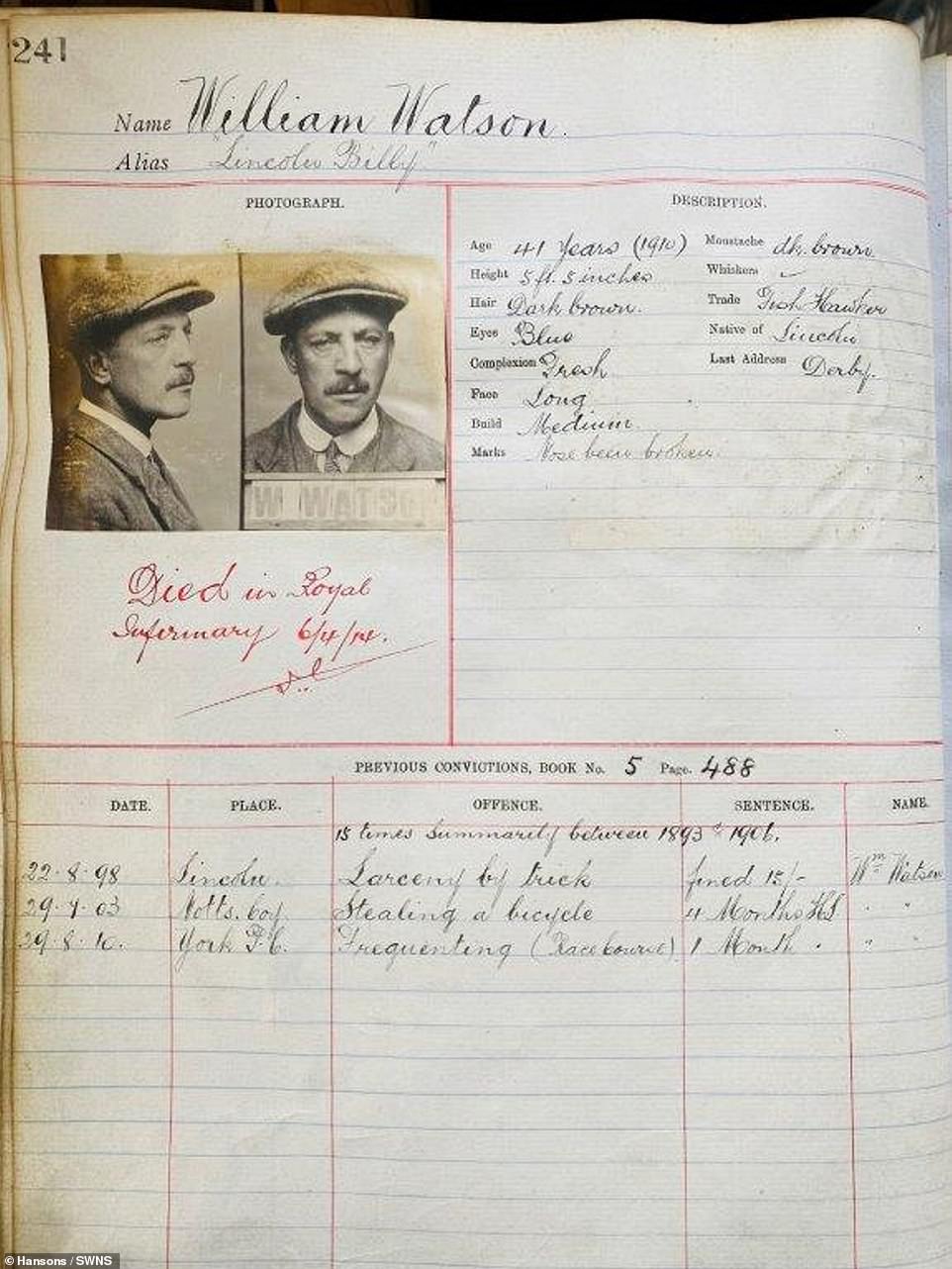 William Watson of Derby who stole a bicycle and was also found guilty of ‘larceny’, which means theft. The ledger’s seller said it was rescued by his police officer father, who prevented it being thrown in a skip during a clear out more than 40 years ago 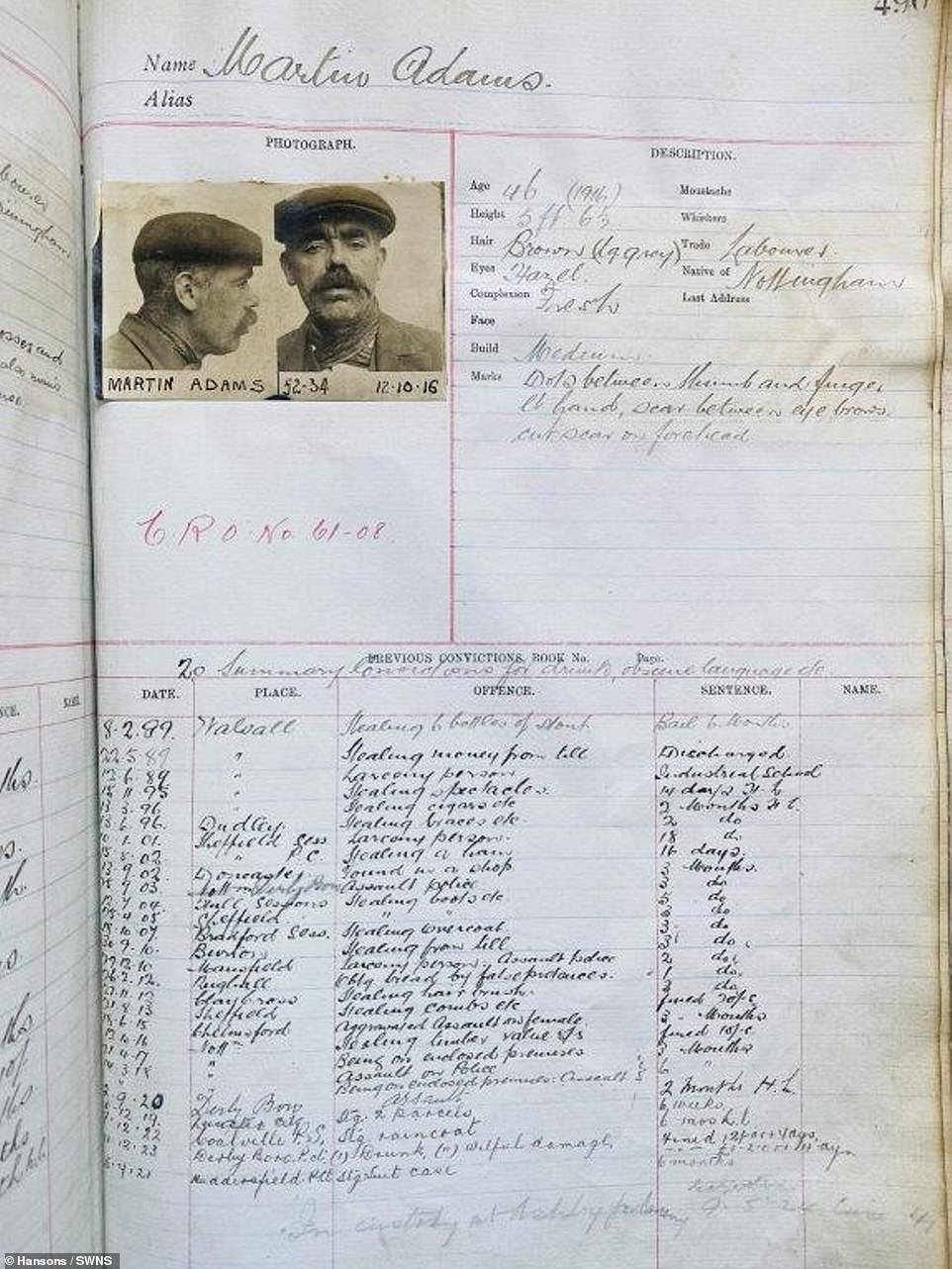 Martin Adams, of Nottingham, was arrested for a litany of offences, including the theft of a comb. The ledger is being sold by via Hansons Auctioneers where it is expected to fetch between £2,000-£3,000 on October 19.

‘She’s been honoured with a Blue Plaque and a star in the city’s Walk of Fame.

‘After decades in a cupboard, I’ve decided it’s time someone else had the opportunity to research this important historical record.

‘As well as the Wheeldon family, there are nearly 500 other people with a story to tell.’

Alice, who died in 1919, was a supporter of women’s suffrage and an anti-war campaigner.

In the black and white mug shots of the Wheeldons, she is described as 51 years old, pale with dark brown hair.

Underneath in red ink a note dated December 30, 1917 states ‘Discharged’. Added on February 21, 1919 is ‘Died’. Weakened by her ordeal, Alice lost her life to influenza during the infamous Spanish Flu pandemic.

It is believed she was targeted for her political beliefs and as recently as 2019 efforts were made to have all convictions quashed because ‘the defendants’ right to a fair trial was sacrificed in the name of political interests’.

Some evidence may have been fabricated on behalf of a government keen to disgrace the anti-war movement.

It was known the Wheeldons were sheltering young men on the run from conscription during the First World War.

In December 1916 ‘Alex Gordon’, an undercover agent, arrived at the Wheeldon home claiming to be a conscientious objector. Alice took him in.

He told her work camps for conscientious objectors were guarded by dogs. A package containing two vials of curare and two of strychnine was sent to her. 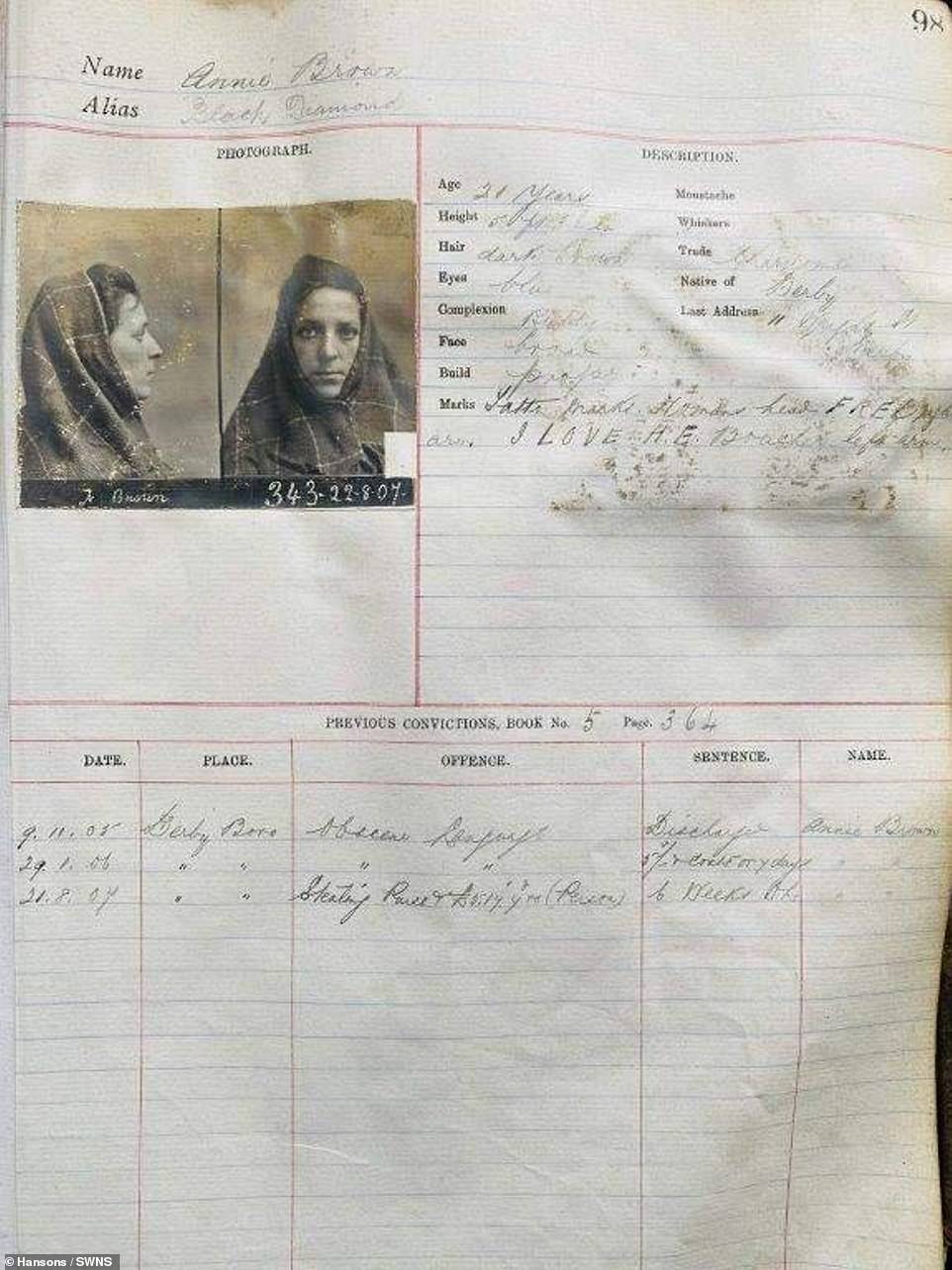 Annie Brown of Derby, who used the alias Black Diamond, was arrested and sentenced for using obscene language and stealing 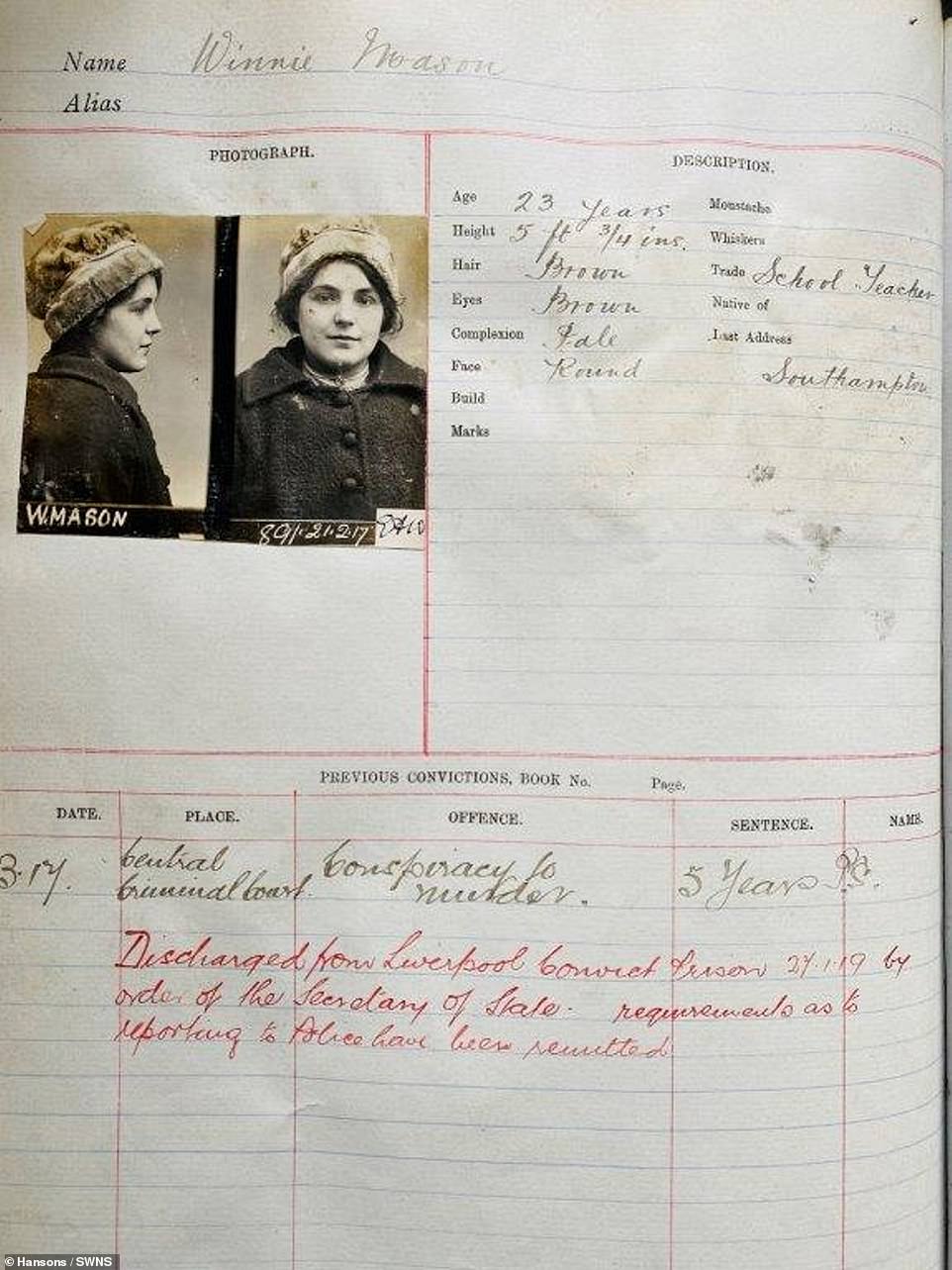 Winnie Mason was sentenced to five years in prison for her alleged role in a conspiracy to murder Lloyd George. She was released in 1919, after the war had ended 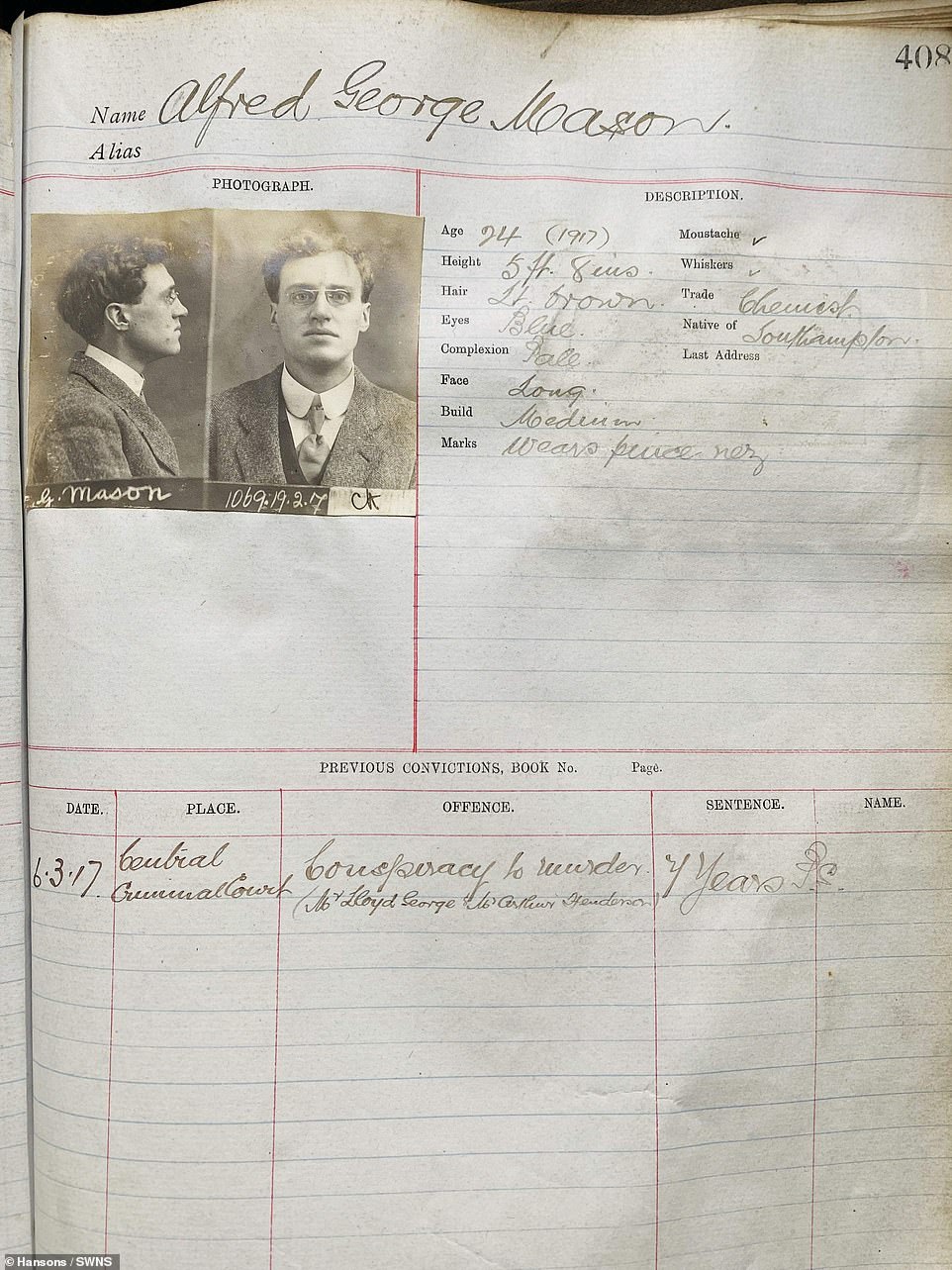 Alfred George Mason, the husband of Winnifred, was sentenced to seven years in prison for his role in the murder plot

The package was intercepted and it was claimed they were intended to kill guard dogs at a work camp.

This claim formed the basis of the case against the family.

After being convicted, Alice went on hunger strike and was released early due to ill-health later in 1917. Her daughter was also released in 1919, after the war had ended.

Surviving relatives had led a campaign to have the case reopened but earlier this year a bid to officially clear their name failed.

The Criminal Cases Review Commission (CCRC) said in June while their arguments had merit, the case was too old to justify the expense.

‘However, nothing prepared me for that first look inside when he brought it along to Hansons’ Staffordshire saleroom, Bishton Hall.

‘I was amazed how many individuals were featured in the book, and I was struck by the range of offences.

‘I’m sure many people will say it reminds them of TV’s Peaky Blinders, and I guess some criminals do have the appearance of a baddie in a Laurel and Hardy film, but most seem pitifully trapped by their circumstances.

‘The overwhelming feeling for me is quite tragic, with petty thefts being committed by desperate people living in poverty.

‘There is a sense of societal division between the majority of criminals dressed in cloth caps, stealing food and clothing, and the occasional gentleman wearing a bowler hat charged with embezzlement.

‘Many of the women have previous convictions for prostitution, and many of the men have been charged for living on the earnings of prostitution. In some instances, a husband and wife have each been convicted for causing their children to beg.

‘A few of the men are dressed in army uniforms, and many individuals are described as having naval tattoos. Identifying marks are described, and most have physical scars. I just get a sense of some very difficult lives in this book.*

‘Some convictions seem shockingly petty, such as*’stealing a tin of pine apple’, ‘stealing a bag of soot’, ‘stealing growing apples’, and some are bizarrely vague, like ‘incorrigible rogue’.

‘This makes it all-the-more surprising to stumble upon a conviction for conspiracy to murder a prime minister.

‘Alice Wheeldon is a famous name, and it’s quite surreal to see the original ‘mug shots’ of her and her family members.

‘For me, this makes the book of serious importance. I’m grateful the vendor’s father rescued this valuable primary resource for historians.

‘Of course, it’s hard to predict what the collectable, monetary value will be for something like this, but it feels important enough for me to guide at £2,000-3,000.’