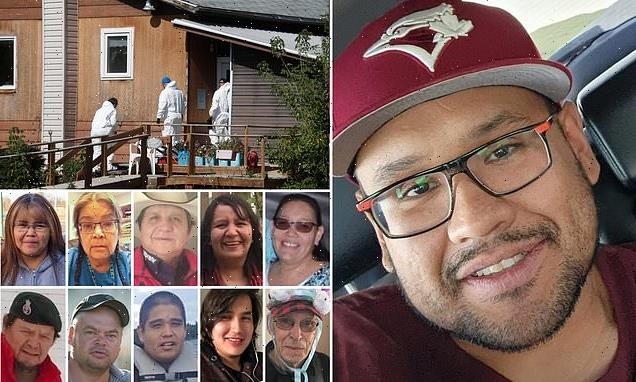 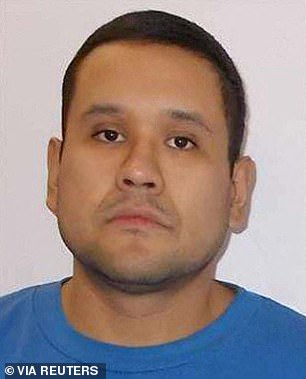 Myles Sanderson was arrested on Wednesday near Rosthern, RCMP said

The second man wanted in a grisly stabbing spree on an indigenous reservation in Canada has been taken into custody after a four-day manhunt.

Myles Sanderson, who was the target of a massive manhunt across the Saskatchewan province, was apprehended on Wednesday afternoon near Rosthern, according to the Royal Canadian Mounted Police.

‘There is no longer a risk to public safety relating to this investigation. Updates to come,’ an RCMP spokesperson said in a statement.

Sanderson, 30, had been the only remaining suspect at large in the Sunday massacre left 10 dead and 18 injured on the James Smith Cree Nation reservation.

Sanderson’s brother Damien – his alleged accomplice in the massacre – was found dead Monday, of injuries cops say were likely not self-inflicted.

The RCMP said they were looking into whether Damien may have been killed by his brother.

‘It is an investigative avenue that we are following up on, but we can’t say that definitively at this point’ an RCMP spokesperson said.

All ten victims of the grisly stabbing spree on an indigenous reservation in Canada have been identified. 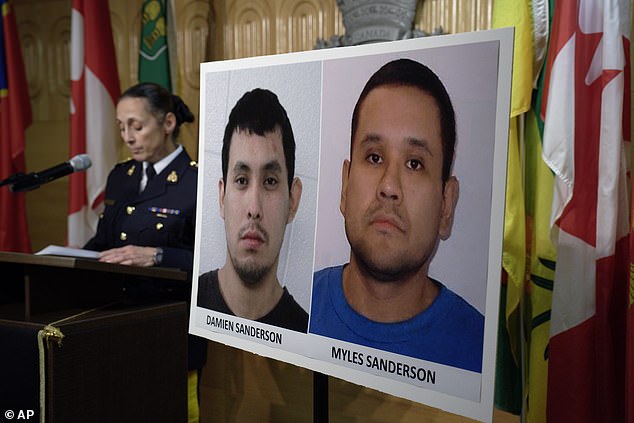 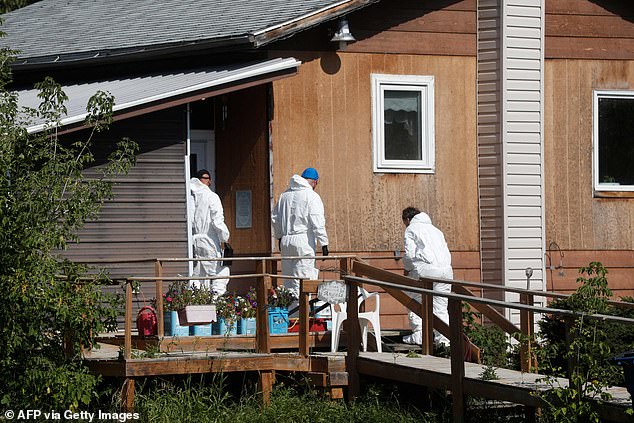 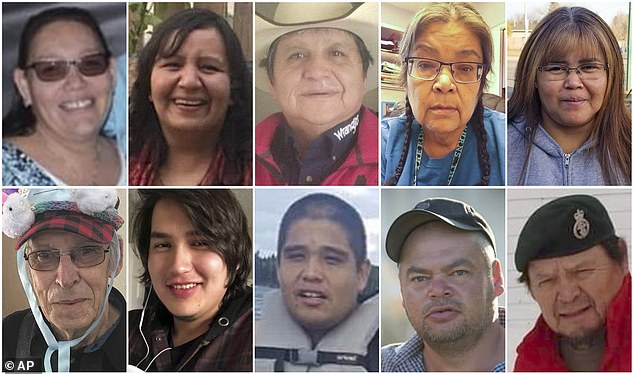 The attacks were among the deadliest in Canada’s modern history – and some of the victims appeared to have been targeted, while others were apparently random.

A mother of two, a 77-year-old widower, a first responder and a 14-year-old boy were the initial victims identified.

The siblings – who were described as armed and dangerous – are the chief suspects in attacks on 29 people in 13 different locations on the James Smith Cree Nation on Sunday afternoon.

Myles Sanderson has been wanted since May when he stopped going to court mandated visits with his parole officer.

He disappeared while out on parole on a five year sentence for assault, robbery, mischief and making threats, according to Regina police chief, Evan Bray.

He was charged with three counts of murder in the first degree, one count of attempted murder and one count of breaking and entering. 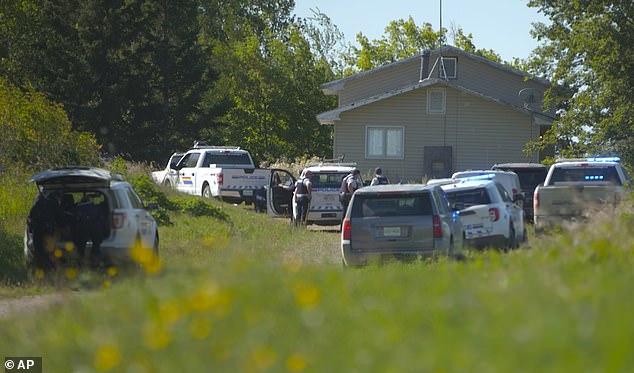 Canadian law enforcement personnel surrounded a residence on the James Smith Cree First Nation reservation in Saskatchewan, Canada on Tuesday as they searched for the suspects 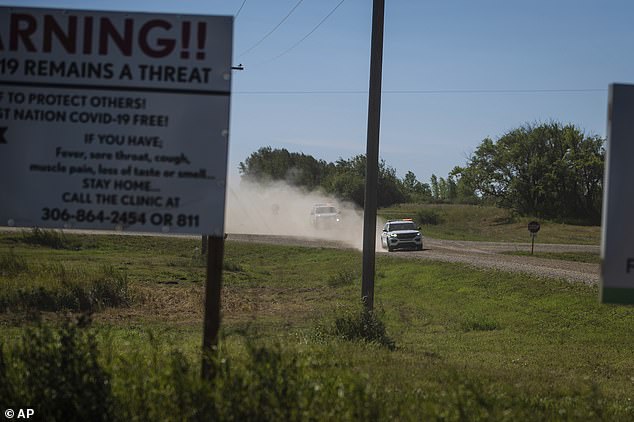 Cops raced up a road and closed in on a house on the James Smith Cree Nation in Saskatchewan province in central Canada, where Myles Sanderson, 30, and his brother are suspected of carrying out the rampage that also injured 19 on Sunday 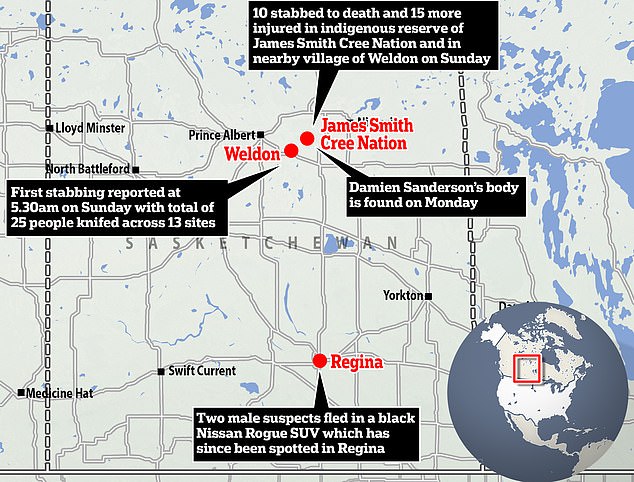 Damien Sanderson was previously charged with one count of murder in the first degree, one count of attempted murder and one count of breaking and entering. But police confirmed that he’s now been found dead.

‘We know. We are confident that someone out there knows the whereabouts of these two and has information that would be valuable to the police,’ said Bray. ‘I urge you to get in touch with your local police service.’

The brothers fled in a black Nissan Rogue SUV which was later spotted 200 miles south of the indigenous reserve.

‘This is my brothers’ vehicle that they took when they entered our home this morning in James Smith Cree Nation,’ a woman posted on Facebook, according to SkyNews Canada.

‘We (can’t) care less about the vehicle but let these monsters be caught.’ 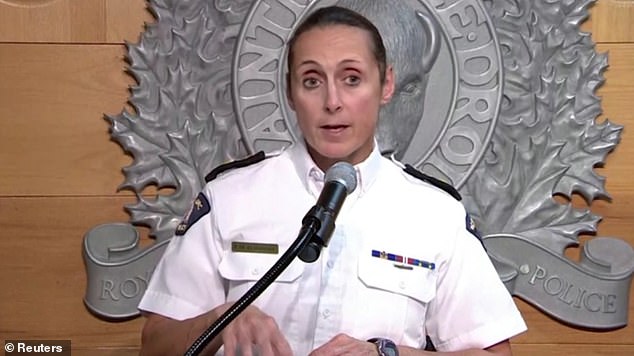 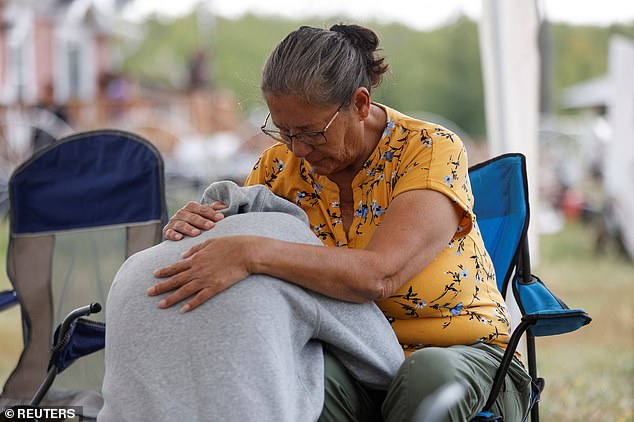 Annie Sanderson, who was close with one of the stabbing victims, Gloria Lydia Burns, 62, comforts her granddaughter 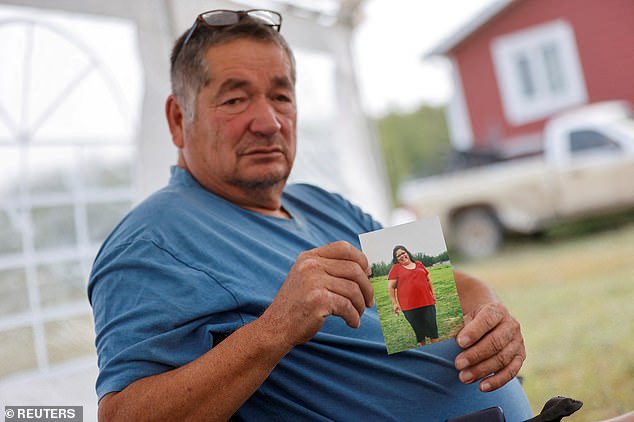 Darryl Burns holds a photo of his sister, Gloria Lydia Burns, 62, who was stabbed to death in Weldon, Saskatchewan during the Sunday killing spree 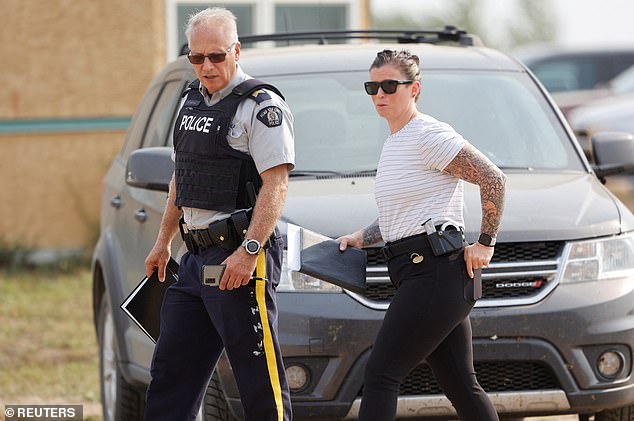 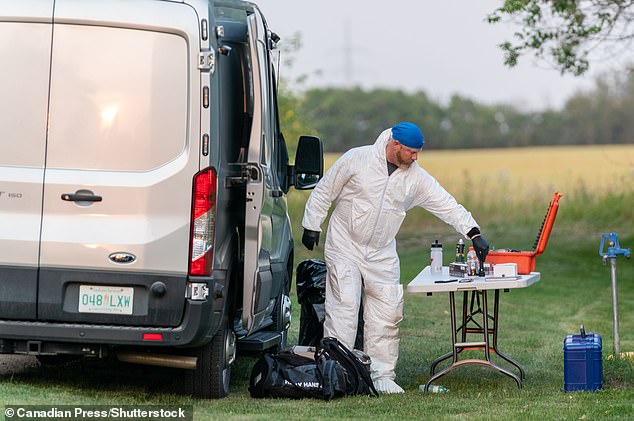 Forensic investigators analyze the evidence at the crime scene after 10 people were fatally stabbed in Weldon, Saskatchewan

The brothers are believed to have stabbed the victims across 13 sites in the indigenous reserve and in the nearby village of Weldon, northeast of the city of Saskatoon.

A police alert and search expanded from Saskatchewan to include neighboring Manitoba and Alberta provinces – a vast region half the size of Europe.

The chief of the Federation of Sovereign Indigenous Nations suggested the stabbings could be drug-related, as it emerged that Myles was listed as ‘unlawfully at large’ by police in May.

The devastated community named Lana Head, the mother of two daughters, as one of the victims of the attack and said she died alongside her partner, who has not been identified.

Wes Petterson, a 77-year-old widower, was the second victim to be named by locals.

Following the frenzied stabbing, the armed suspects reportedly fled the scene in the Nissan which was since spotted in Regina, a city about 208 miles south of the communities where the stabbings occurred, police said. 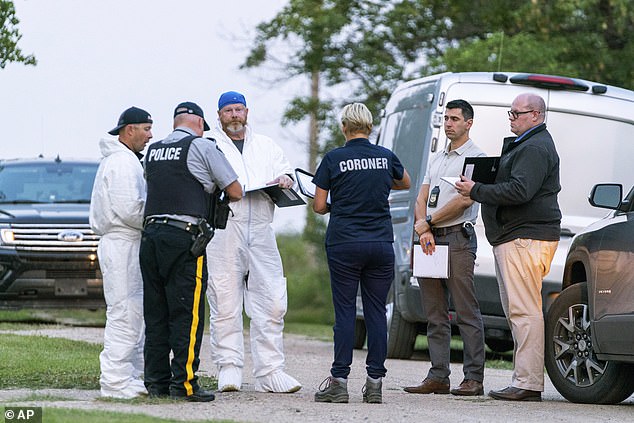 Investigators – including police, forensics, and coroners – gather in front of the scene of a stabbing in Weldon, Saskatchewan 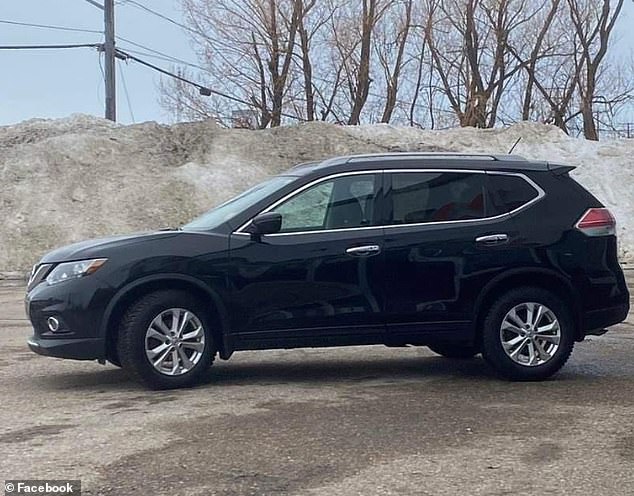 The armed suspects reportedly fled the scene in a black Nissan Rogue SUV (pictured) was spotted in Regina, a city about 208 miles south of the communities where the stabbings occurred, police said

The first stabbings were reported at 5.40am in James Smith Cree Nation, a sparsely populated indigenous community with a population of about 3,400 people largely engaged in farming, hunting and fishing.

Weldon is a village of some 200 people.

The elected leaders of the three communities that make up the James Smith Cree Nation, including the Chakastaypasin Band and the Peter Chapman Band, declared a local state of emergency and opened up two emergency operations centers.

September 4, 5.40am: Police receive report of a stabbing in James Smith Cree Nation

7.57am: Police reveal names and pictures of two suspects

3.45pm: Police announce 10 have been killed and 15 injured across 13 locations

September 6: Police converge with guns drawn on a home in the reservation after reports Myles was seen in the area. Authorities also issued a shelter-in-place order to surrounding community

Chief Bobby Cameron of the Federation of Sovereign Indigenous Nations, a group which represents 74 First Nations in the state of Saskatchewan, suggested the stabbings were drug-related.

‘This is the destruction we face when harmful illegal drugs invade our communities, and we demand all authorities to take direction from the Chiefs and Councils and their membership to create safer and healthier communities for our people,’ Cameron said.

The former partner of Lana Head, who was killed in the attack, also suggested the attack was linked to drugs and alcohol.

Burns earlier paid tribute to his ex-partner, writing on Facebook: ‘You will be missed dearly Lana. Thank you for beautiful daughters and granddaughters.’

A friend also paid tribute to Head, writing on Facebook: ‘I love you and say prayers for your children, grandchildren, your family. I am going to miss your sweet hello’s and messages. I will forever cherish your sweet demeanor and caring ways.’

Ruby Works said the second named victim, Wes Petterson, was like an uncle to her.

‘I collapsed and hit the ground. I’ve known him since I was just a little girl,’ she said, describing the moment she heard the news.

She said he loved his cats, was proud of his homemade Saskatoon berry jam and frequently helped out his neighbors.

‘He didn’t do anything. He didn’t deserve this. He was a good, kind hearted man,’ said Works.

Weldon resident Robert Rush described Petterson as a gentle, widowed man in his 70s. ‘He wouldn’t hurt a fly,’ he said.

Rush said Petterson’s adult grandson was in the basement at the time of the stabbing and phoned police.

Chakastaypasin Chief Calvin Sanderson – who is not related to the suspects – said everyone’s been affected by the tragic events.

‘They were our relatives, friends,’ Sanderson said of the victims. ‘It’s pretty horrific.’

Indigenous people account for less than five per cent of Canada’s population of about 38 million and suffer from higher levels of poverty, unemployment and a lower life expectancy than other Canadians.