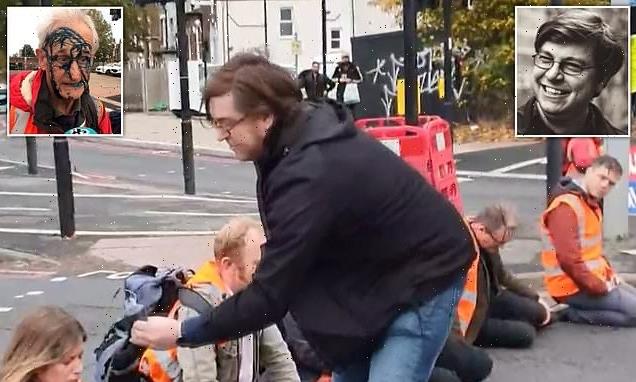 EXCLUSIVE: Motorist, 38, who threw ink over Insulate Britain protestors is music promoter from Essex who ‘lost his temper’ when mob ‘refused to let an ambulance through’

An angry motorist who threw ink over Insulate Britain protestors is a music promoter from Essex who was frustrated because he believed the eco mob were refusing to move for an ambulance stuck in the jam, Mail Online can reveal.

Andrew Dutton was filmed calmly walking along the line of the protestors sat in the middle of the road and spraying them with ink as they blocked traffic yesterday.

The 38-year-old from Harlow, Essex, who works with bands and arranges concerts, later told friends he lost his temper after asking the protestors to move from the A40 in North Acton, West London, to allow an emergency vehicle through – only for them to refuse and stay put.

Mr Dutton reached for the ink pot after 17 protestors sat across the A40 – one of the main routes into London – on what was the protest group’s latest demo during morning rush hour on Wednesday.

Other protestors caused traffic chaos on the M25 at Dartford, Kent, where 38 people were arrested.

Friends have hailed Mr Dutton a ‘hero’ for taking a stand against the eco mob as they caused yet more mayhem on London’s roads – despite court injunctions banning them from staging the sit-down protests.

Andrew Dutton (pictured), 38, was filmed calmly walking along the line of the protestors sat in the middle of the road and spraying them with ink as they blocked traffic yesterday

Mr Dutton, from Harlow, Essex walked along a line of sitting protesters and squirted them in the face with a bottle of on the A40 in west London

Andrew refused to comment when contacted by Mail Online, but a friend said he had been frustrated over the protestors point blank refusal to move and allow an ambulance pass.

The friend said: ‘Andrew told me he had asked those sitting down to move out of the way so that an ambulance could get through. He thought it was incredibly selfish.

‘They just sat there and did nothing so he warned them he would spray them with ink, and he did just that.

‘Many of his friends think he was brave to stand up to them. It takes courage to do that in front of the cameras who are filming everything.

‘He’s just a straight-up guy who was trying to get to work and got caught up with the protest.

‘There has been a lot of positive comments on social media but others have said he was in the wrong.

‘All his friends are fully supportive and feel it is about time someone stood up to this lot.’

Among those who ended up being doused with blue ink was a retired GP who gave his name as Christian.

He later said: ‘It wasn’t painful, it didn’t hurt – it was unpleasant, but just sad, the whole thing’s sad, it’s sad that we have to do this.

‘I hate doing it, I’m a retired doctor, I’ve spent my whole life trying to help people, and I’m reduced to having to do this because the Government won’t address the problem adequately, basically. Terribly worried.’

Retired doctor Christian, 77, is an Insulate Britain protester who had ink thrown at him by angry drivers on the A40 on Wednesday

Christian (pictured) later said: ‘It wasn’t painful, it didn’t hurt – it was unpleasant, but just sad, the whole thing’s sad, it’s sad that we have to do this.’

The demonstrations lasted about two hours – having both began at about 8am with the familiar sight of the protestors wearing high vis jackets and clutching a banner.

The protesters have brought chaos to motorways and A roads in the capital since mid-September with 146 people taking part in the campaign and 739 arrests made so far – but not one person yet been charged.

The activists were effectively banned from all major roads in England on Monday after a landmark High Court ruling.

The protestors are effectively banned from holding a protest on 4,300 miles of motorways and A roads across the country

But despite the threat of prison and unlimited fines the protestors have vowed to continue with their sit-down demos.

Activists warned that the disruption will continue, with a spokesman for the group adding: ‘Insulate Britain will return to the roads at the earliest opportunity to continue our campaign of nonviolent civil resistance until Boris Johnson gets on with the job of protecting the people of this country.

‘Insulate Britain has a duty to continue our campaign and we will not be bystanders whilst the Government condemns this country to death.’