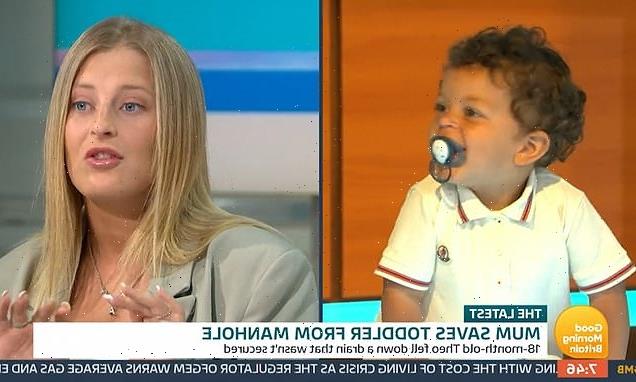 ‘He was screaming my name’: Mother relives horrific moment when her 18-month-old son plunged through manhole cover into sewer as she rushed to save him

The mother of a tiny toddler who plunged 5ft down a sewage drain has today revealed she thought he was ‘gonna be dead’ before she jumped down and found him ‘absolutely screaming my name’.

Little Theo Prior fell through a drain cover as it flipped over then closed on top of him on Sunday afternoon while he was walking to his father’s house with his mother Amy Blyth.

CCTV from a nearby house showed the moment quick-thinking personal trainer Miss Blyth jumped into the drain to rescue the 18-month-old tot and quickly plucked him from a river of human waste in Tenterden, Kent.

‘I couldn’t even hear him, I didn’t even know if my baby was gonna be there, if he was gonna be dead because the hole was so tiny, I just literally jumped into the hole,’ Theo’s mother said.

‘He was at the bottom standing in sewage up to his knees, he was screaming my name, absolutely screaming my name, and I just jumped in cause there was these concrete steps, I managed to get my foot on one but the hole was so tight I couldn’t bend my body forward to actually grab him.’ 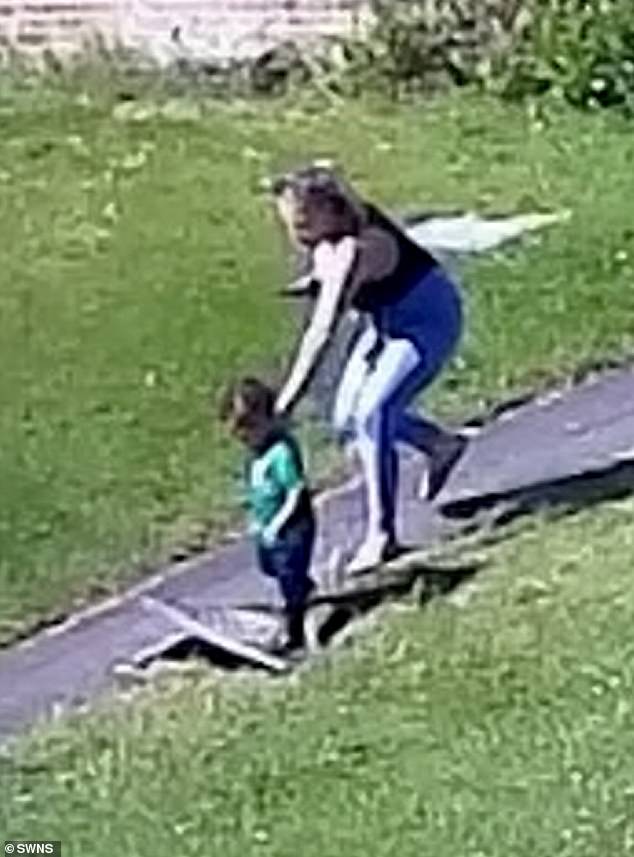 CCTV of Amy Blyth and her son Theo, who plunged through a drain in Ashford, Kent 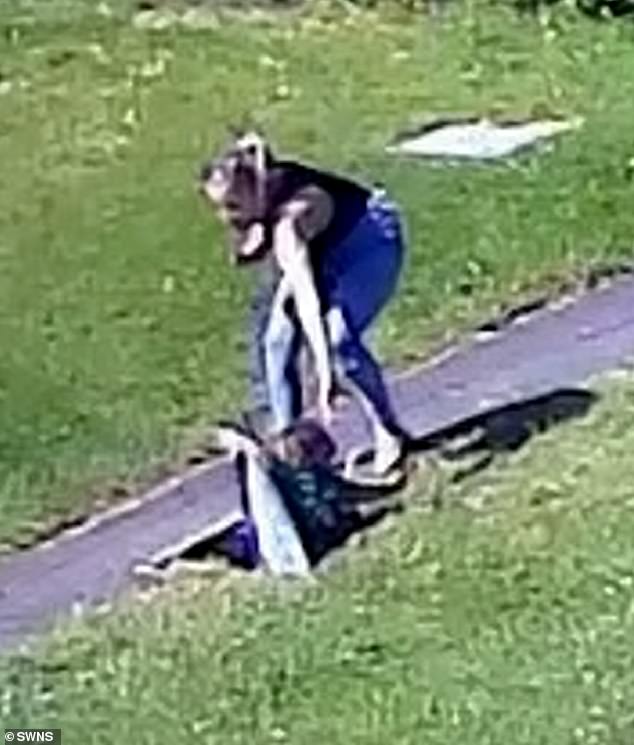 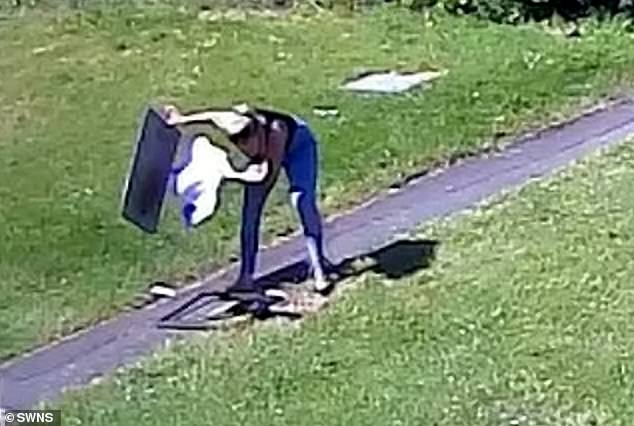 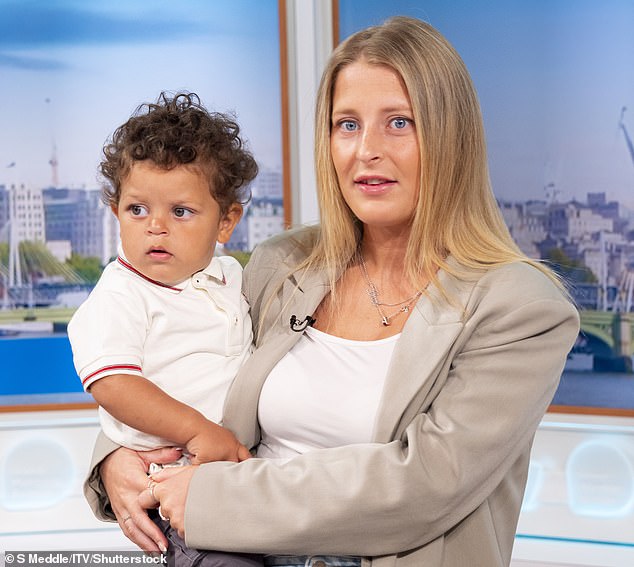 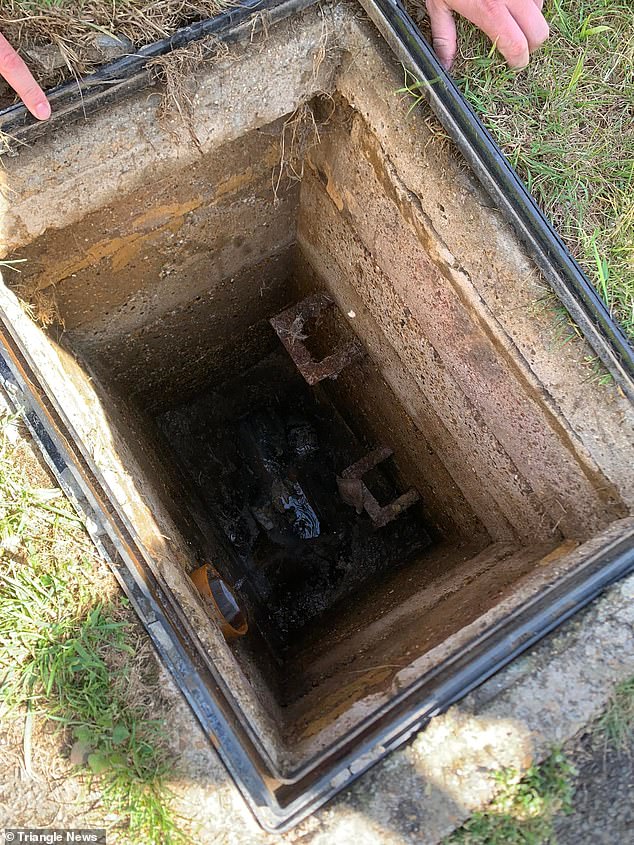 The loose drain cover (pictured) that little Theo fell through

She added: ‘So we was walking through the area to his dad’s house, was walking out from my mum’s house to the car and I was walking along thew path and Theo was holding my hand at the start.

GMB host Richard Madeley responded: ‘Thank god it wasn’t raining! If you’d been in a storm, he would have been swept away.’

The terrified mother rushed the little boy – who is said to have swallowed some sewer water – to Ashford’s William Harvey Hospital, where medics diagnosed him with mild concussion, but x-rays revealed he miraculously got away without a broken bone.

Theo is now home and doing well, but Miss Blyth complained to Southern Water and said she ‘needs answers’ as she believes the drain cover has been faulty for some time. 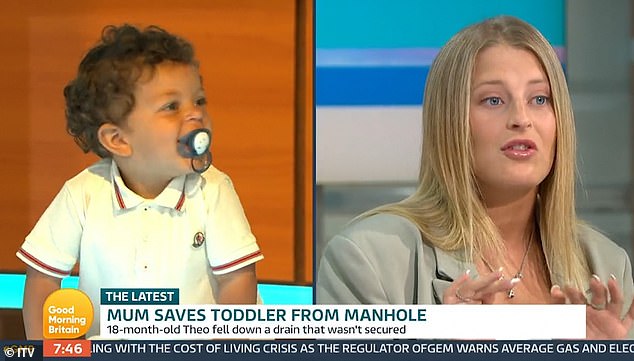 On GMB this morning, Miss Blyth said she feared Theo was ‘gonna be dead’ 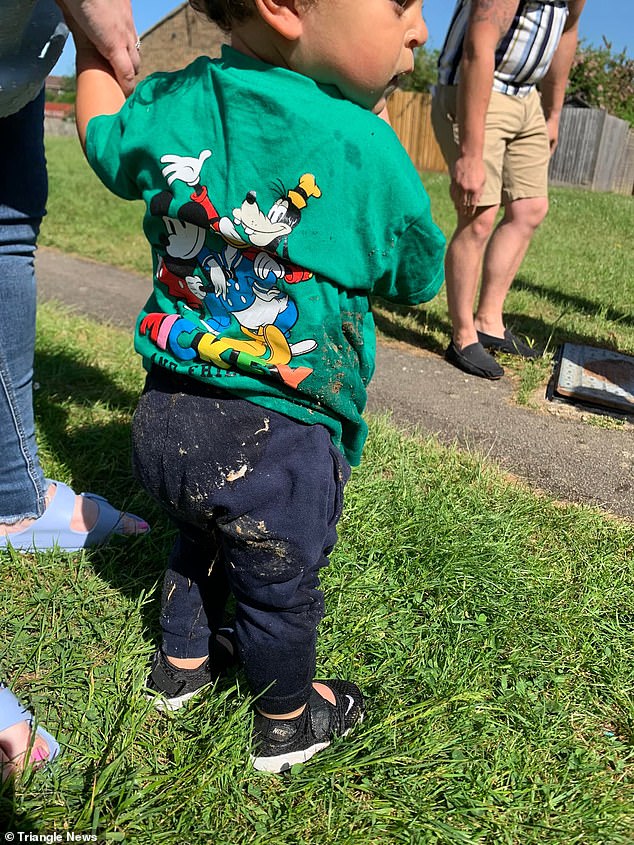 The personal trainer said: ‘Just as I pulled him up I think someone flushed a chain because we were soaked – with I think, possibly, wee. Our clothes are absolutely disgusting’ 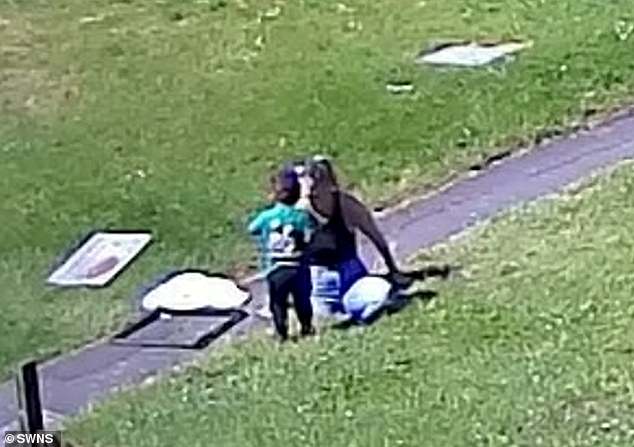 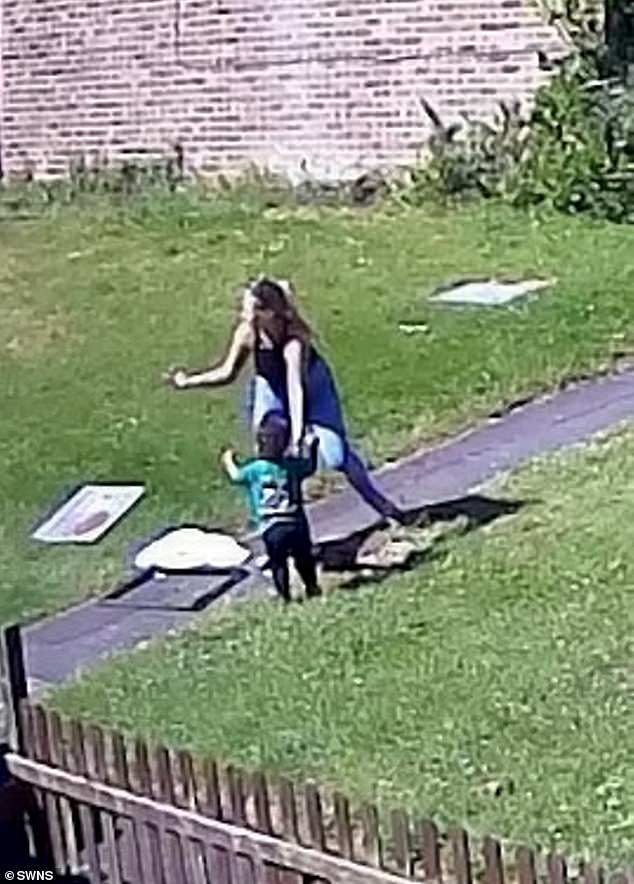 Yesterday Miss Blyth said: ‘I yanked the drain lid out, and I just saw him down there, screaming my name. There was sewage up to his knees.

‘I jumped down the drain, but it’s not big enough for me to bend over to grab him. I had to sort of arch my body to grab him and pull him up.

‘I don’t know how I did it. My body went in ways I’ve never bent before, just to get him out of that drain. It was so deep you couldn’t see my head from the ground, and I wasn’t even on the floor.

‘Just as I pulled him up I think someone flushed a chain because we were soaked – with I think, possibly, wee. Our clothes are absolutely disgusting.

‘It could have ended up so much worse. If he’d gone down head first, I don’t even know if he would be here. It makes me feel sick to think of it. It’s an absolute nightmare – I’m petrified of drains now. I still feel really shaken from it. I just can’t really get over it.

‘He literally went straight to the bottom, and I thought I was going to lose him. It was actually like a horror film.’

Theo’s mother said she dreads to think what might have happened had a child fallen through the drain cover unseen. 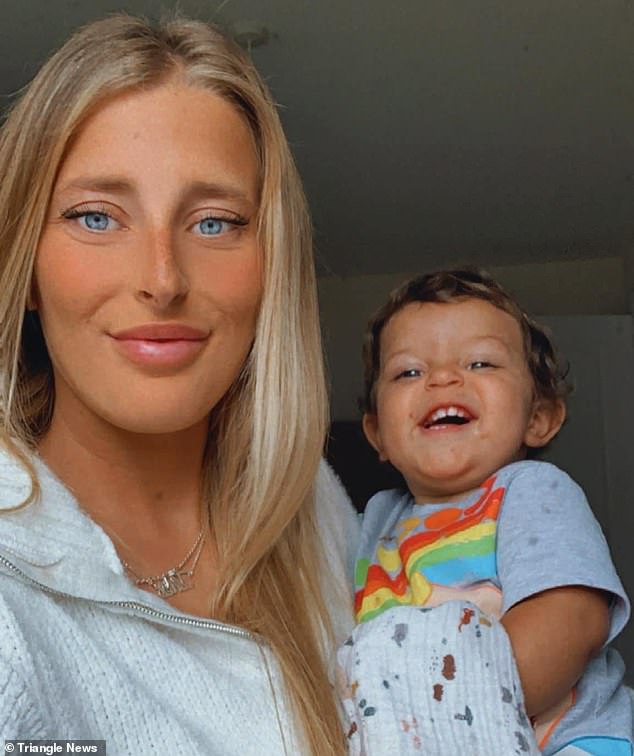 Amy Blyth, 23, jumped into the drain to rescue the tot and quickly plucked him from a river of human waste on Sunday afternoon in Tenterden, Kent 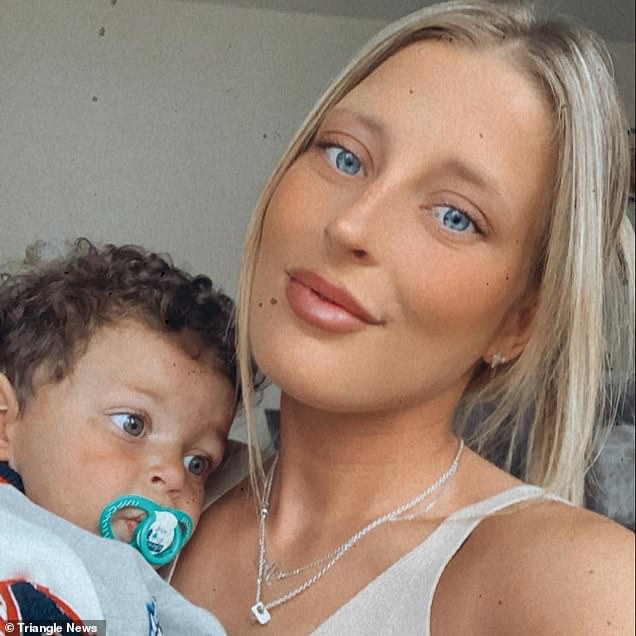 The terrified mum rushed the little boy – who is said to have swallowed some sewer water – to Ashford’s William Harvey Hospital, where medics diagnosed him with mild concussion, but x-rays revealed he miraculously got away without a broken bone

She added: ‘If he’d been on his own, or if it had been another kid on their own, we wouldn’t have found him. We wouldn’t have known where they’d gone. You couldn’t even hear him because it’s sound-proof.

‘He could have fallen down and I’d have gone running round the block trying to find him, not in a drain.’

It is understood Southern Water is working to establish who is responsible for the drain and manhole.

Around four investigators were seen in the area on Sunday looking into the cause of the accident.

A Southern Water spokesperson said: ‘We are aware of a situation involving a child and an open manhole.

‘This is clearly an upsetting situation for those involved and our team is on-site. A dedicated customer liaison officer has been assigned to support the family.

‘We are taking this matter very seriously and our first priority was to make the area safe. Next steps are to understand exactly what happened.’